New Year's Eve was the piece de resistance of our trip, the day that we had all been waiting for.  And so naturally we stayed up until 2am the night before and woke up groggy and a little bit out of sorts.  That was okay, though, because all the action wouldn't start until the evening -- we had all day to leisurely eat a late breakfast of tacos, wander frozenly through SoHo, and have lunch with Eve, one of Justin's friends.

After lunch, we made a beeline to Murray's Cheese.  We knew that we'd be up again until the wee hours, and we had no intention of doing so without substantial provisions of cheese, prosciutto, salami, fruit, and bread.

We brought our picnic fixings back to the hotel at Times Square, discovering that the streets had already been shut down in anticipation of the Times Square crowds later that night.

Back in the hotel, we took a restorative power naps and dressed for the evening.  And by "dressed for the evening", I mean it in the Edith Wharton/Downton Abbey way:  black tie and evening dress!  Which, let me just say, is a delightful process and best when done with others.  There's just something so elegant and grown-up in standing in a tuxedo at a wide mirror, tying your bowtie, next to a woman in evening gown who's touching up her makeup and putting on her jewelry.  I told Amanda it's what I imagined Mr. and Mrs. Darling doing before they went out and left their kids in the nursery with Peter Pan.  (Meanwhile Justin was in the main room figuring out how to tie his bowtie in record time.)

Once we had put the finishing touches on our bowties and makeup, we hailed a cab uptown for an early dinner at Boulud Sud, a fancy Mediterranean restaurant run by chef Daniel Boulud and conveniently located across the street from Lincoln Center.  They knew we had opera tickets and brought out a prix fixe menu right away.


When dinner was done, we hurried across the street, eager to get to the Metropolitan Opera.  The big event had arrived! 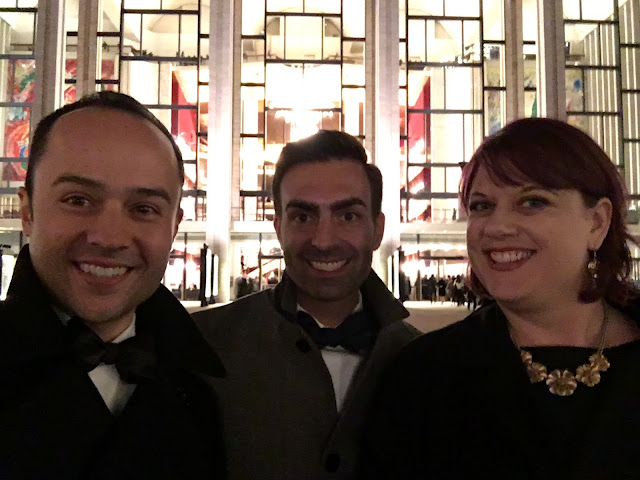 We were seeing the New Year's Eve gala premiere of Bizet's Les Pecheurs de Perles (The Pearl Fishers).  Bizet wrote it in the mid-19th Century when he was only 25, and it was last performed at the Met in 1916, with the famous tenor Caruso singing the role of Nadir.  This was the premiere of the brand new production, with Diana Damrau, Matthew Polenzani and Mariusz Kwiecien.


The first act was gorgeous.  Nothing really dramatic happens -- old friends meet, a girl shows up.  But the staging was magnificent (a modern seaside shantytown that could be anywhere in Southeast Asia) and the opening scene breathtaking (the stage was transformed into the ocean floor, with young men and women diving for pearls).  And the music was equally glorious.  The opera's famous tenor/baritone duet and tenor aria are both in the first act.  Here's a clip of rehearsal footage:

At intermission, we enjoyed seeing the tables set up for the gala dinner/ball that would follow the performance . . .

. . . and we found a quiet spot in the foyer where we could watch the beautifully dressed people go by.

After a while we decided we deserved a moment in the limelight, so we stepped out and tried our luck with asking strangers to take our photo.  It's always a challenge to get someone with a good eye for framing, angle and lighting, but I think these give you a sense of the moment. 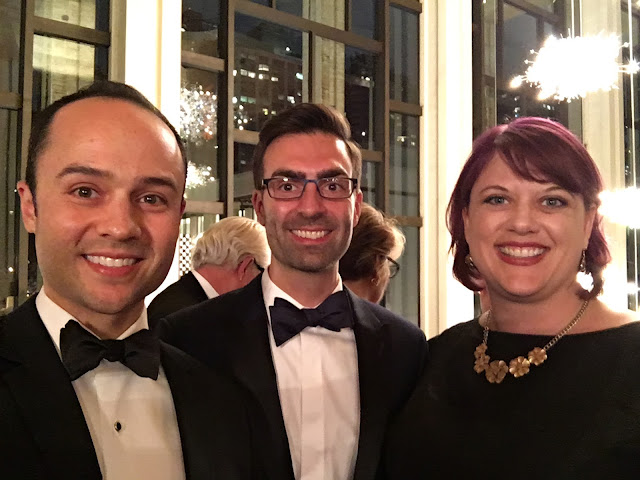 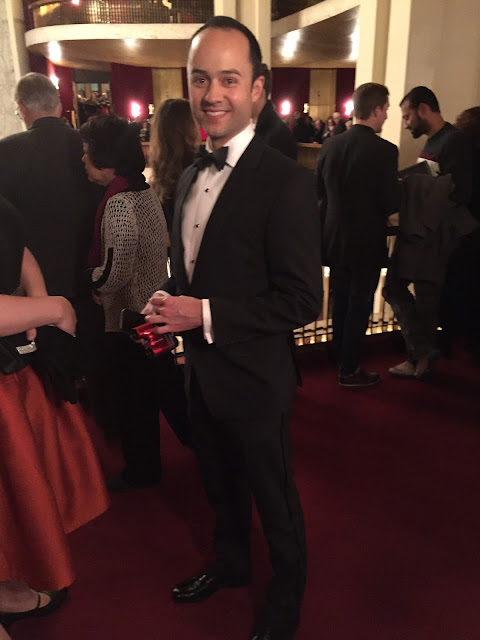 The bells rang and we returned for the second and third acts of the opera (no more intermissions!).  When the final curtain fell, we emerged into the foyer and were gently encouraged to leave so that the gala could start.  We paused for a moment outside to revel in the beautiful purple and green party lights that transformed the place. 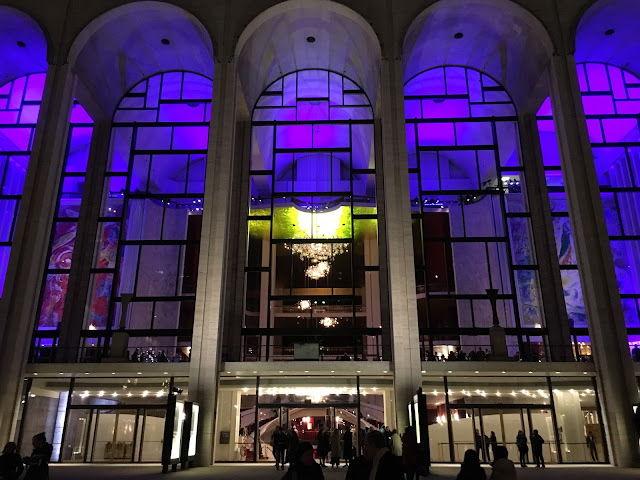 We lingered there for a while. soaking in the atmosphere and watching the famous fountain play.  But then we got cold and walked over to Eve's house for a quick appearance at her New Year's Eve party. We were delighted to discover that her friends were all super interesting and welcoming (two playwrights, an engineer, a graphic designer, a political scientist, and a professor of Chinese theatre). We decided we wanted to become good friends with them all.

But we also wanted to get back to the hotel before the ball dropped and the crowds became insane.  So we cut our visit short and headed back to midtown.  We made our way through the crowds . . . 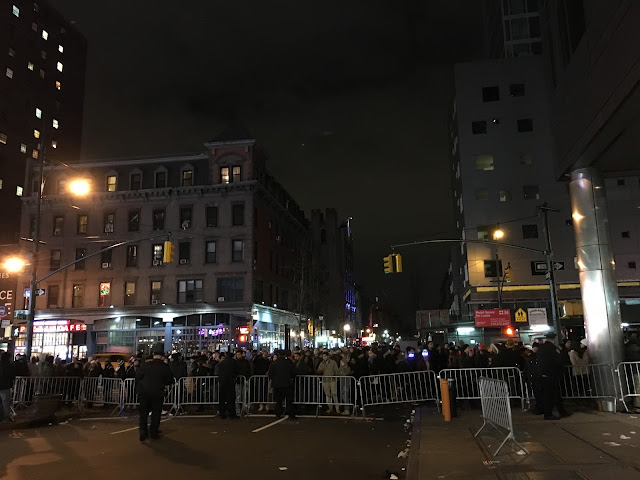 . . . and into the hotel, where we posed for another round of photos.  Because who wants to take off the party clothes when they look this good!

Back in the room, we broke out the feast of cheese and meats . . . 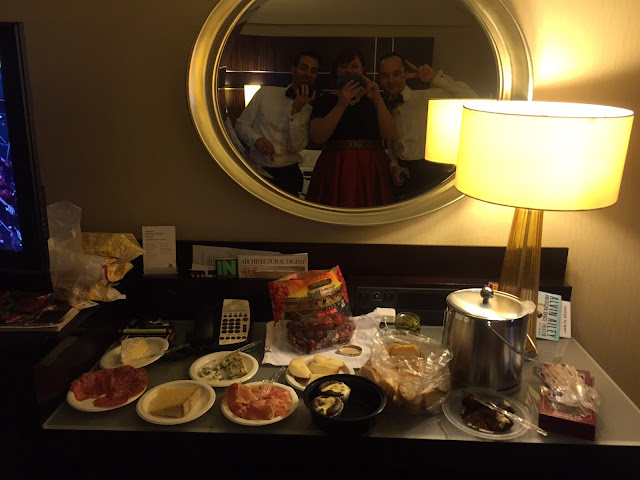 And with that the wild party began!  It basically consisted of sitting on the couch and untying our bowties and pulling faces.  We had a terrific time. 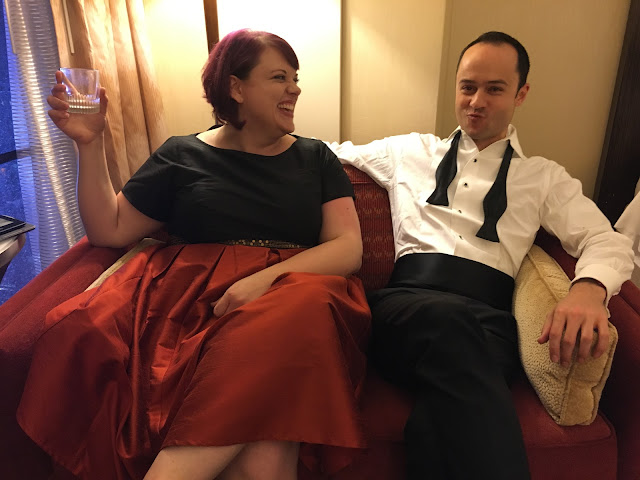 The whole evening was completely wonderful, and definitely a highlight that will hold its own among our many travels.  We came away shocked that we hadn't done black tie sooner and resolved to do it again before long.