On Tuesday morning we left sunny San Juan and flew to New York.  I spent most of the 3.5-hour flight zonked out beneath my eye-mask (our dissolute vacation habits of getting roughly 5 hours of sleep each night were catching up to me) and landed at the Big Apple bright eyed and ready for the next adventure. 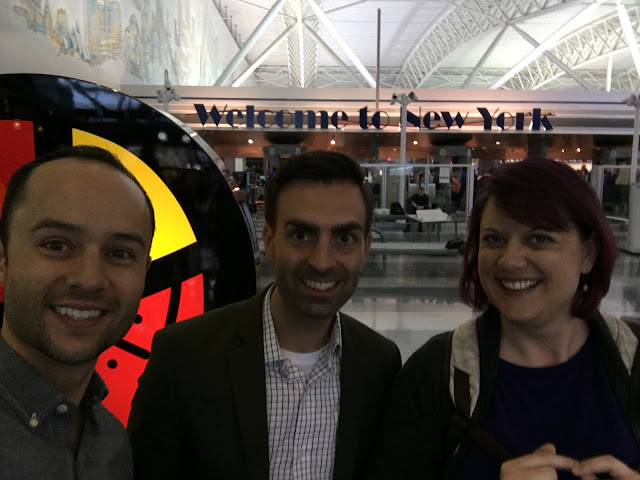 We caught the E line into the city at Jamaica Station, which brought back memories of meeting Ashley there on a cold winter's day during her mission approximately a million years ago.

The ride into Manhattan went smoothly.  We emerged into crowds of people and made our way to the hotel.  We're staying in the Marriott on Times Square, where I saw my first Broadway musical almost 14 years ago.  I remember then thinking how cool it would be to stay here someday . . . .

After dropping our things off in the room, we headed out for a quick dinner at a new place that Amanda described as a "Hipster Food Court", and which was conveniently only a block away.

Once we had eaten, we headed across town to the New York City Center to see the Alvin Ailey dance group perform.  They're a favorite of mine, and I was eager for Justin to see them dance.  They didn't disappoint:  Two pieces, in particular, stood out for me.  One was a male/female duet that I hadn't seen before, called "A Case of You", that was intensely lyrical and had some exquisite moments between the dancers.  The other was "Revelations", which they perform at nearly every concert -- it's a masterpiece and a crowd-pleaser, and for as many times as I've seen it, it's never lost its power to uplift and inspire. 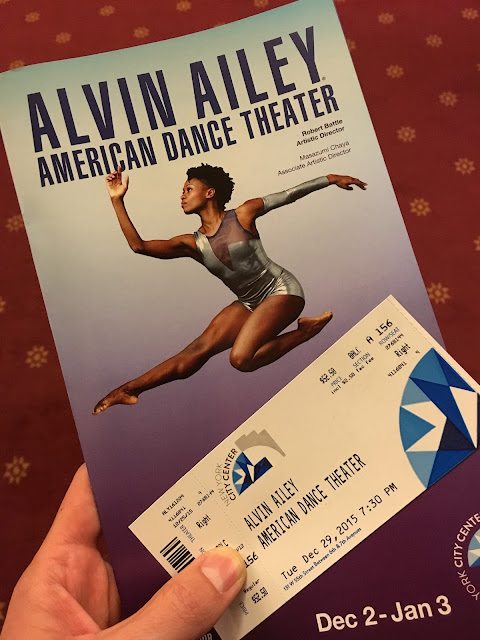 As we emerged from the concert, we felt the rumblings of hunger.  Amanda led us to a little Indian shop she had discovered on a recent trip.  They sold tasty kati rolls and were open late -- perfect for a post-theatre snack!


Then we walked back to the hotel for bed -- looking forward to tomorrow!
Posted by JJD at 10:50 AM