Can you believe it has been a year since I moved to Seattle?  Exactly one year ago today, I set out from DC to drive across the country to my new home.  I had never lived in Seattle, and I knew no one.  I had accepted a job that I had hoped would give me back my evenings and weekends, and I was betting my future happiness on the hope that, with that new-found time, I'd be able to make new friends, reconnect with family, and generally build a new life that would be more balanced, rooted and rewarding than the life I had built (and, frankly, loved) during the prior 11 years on the East Coast.

Maybe I should knock on wood, but I'm delighted to say, at this one year mark, that the bet seems to be paying off:  I've got a job that is challenging and interesting and has given me back my evenings and weekends.  I own a beautiful home, belong to a terrific church community, and have gotten into great physical shape.  I'm three months into an exciting new relationship, have built a large and growing circle of friends, and am getting more involved in the community through service and volunteering.  To top it all off, winter is over and we're moving into the long days of Seattle spring and summer.

Which is all to say that I've got an enormous amount to be grateful for at this one-year anniversary.  So why not have a giant party to celebrate?!

I picked last Saturday as the date and invited everyone I could think of who I thought of as my friend, or who I wanted to become my friend.  Turns out that was kind of a lot of people -- I had more than 70 on my invitation list, and nearly 60 said they would come!!  (Holy cow what was I thinking!!!)  Fortunately, I have a three-story townhouse with a roofdeck on top, so I went into full party-planning mode (complete with spreadsheets, traffic flows, furniture plans and contingency arrangements for inclement weather) and pulled off the biggest (and funnest) party I've ever thrown.

Aside from having a great guest list and enough room in the house, the real key to success, I think, was food and furniture.  I got my realtor and mortgage banker to help with a local caterer for food and drink (I put them in charge of the alcohol and fruit plates, and I took care of the rest).  And then I rented some key party equipment from a local party supply place.

For example, I knew I didn't have enough closet space for 60 coats, and I didn't want to tell people to just dump them on the bed, so I rented a garment rack and hangers that I could place in the entry way. 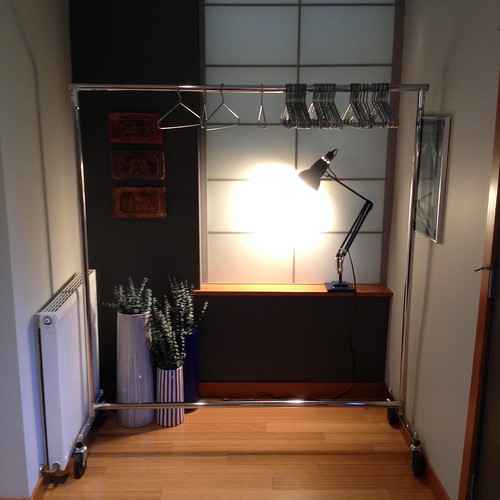 The counter-height table that normally stands where the garment rack went was moved into the middle of the room to act as a buffet table for the fruits and veggies. 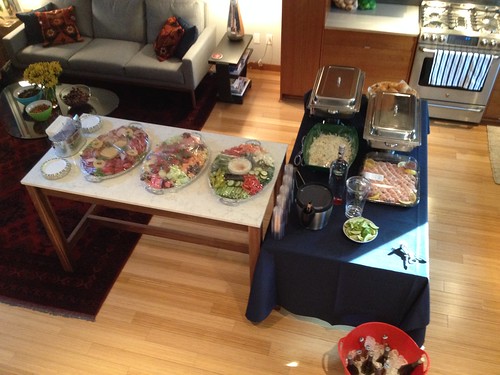 I pushed one of my living room chairs under the stairs to create more standing room, and I clustered the rest of the furniture into a little conversation group with plenty of treats within easy reach.

For food, I had fruits and vegetables, a cold pork shoulder with mustard sauce on the high table.  And on the low table, a tray of shrimp and heavy hors-d'oeuvres of sweet and sour meatballs and pulled pork sliders with cole slaw and rolls. 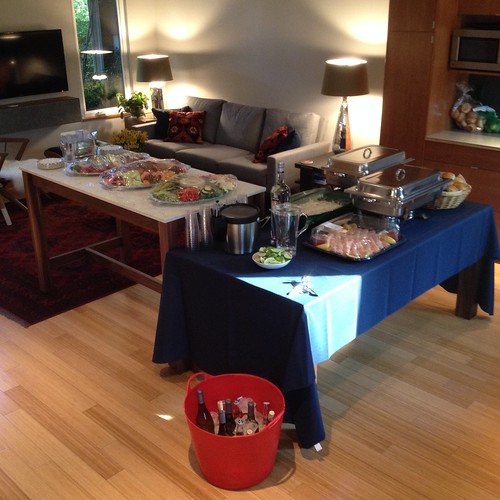 To lure people upstairs into the open area of the second-floor landing, I put up a folding table with desserts, chips and salsa and a bowlful of grapes.  A wicker hamper served as an impromptu garbage can. 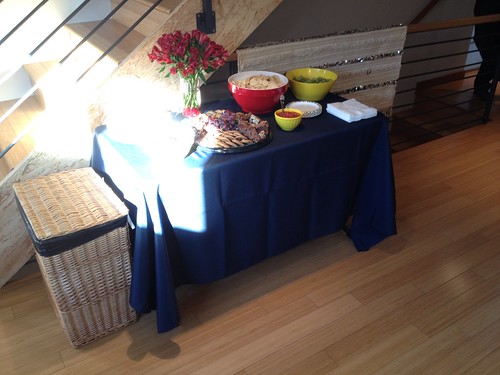 As for the roof deck, we totally lucked out.  All week long the forecasters had predicted rain and used the word "soaker" way too often for my liking.  We did get a few minutes of rain in the morning, but by late afternoon the skies had cleared and it was warm and sunny and as perfect as could be.

I set up a propane-powered patio heater and two cocktail tables with candles and little bowls of nuts and candies.  (Had I known that the weather would turn out so nicely, I would have moved more of the real food up there, but there really was no way to know.) 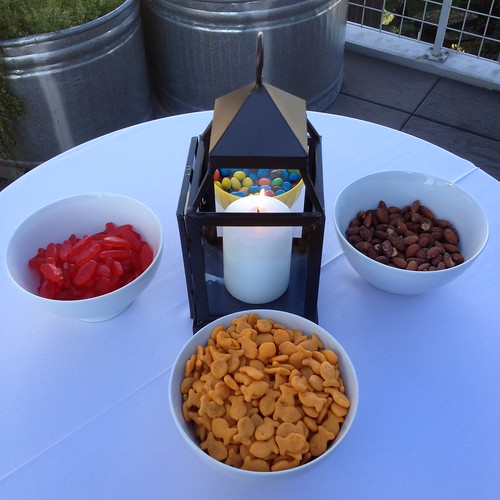 Everything went just as planned:  I had finished most of my prep work on Thursday (all the food) and Friday (moving the furniture), so pretty much all that was left to do on Saturday was put out the linens, set out the food, and light the patio heater.  There was no last-minute stressing or running around (though Justin did volunteer to run to Fred Meyer to pick up some serving utensils, since the caterer didn't send any).

Seven o-clock rolled around and the guests started to arrive.  They trickled in a few at a time and I was able to give a couple of house tours and leave them on the roof.  Then the masses arrived and I just let things run their course -- they knew where the food and drinks were, the stairs and roof told them where to go, and I just got to work my way from group to group, making introductions and chatting and thanking everyone for coming.

The last of the guests went home a little before midnight, and Justin and I were left alone.  It dawned on me that I'd been standing for more than 5 hours straight and had eaten basically nothing the entire night.  I was exhausted and starving and totally on cloud nine.  I had had a great time; I was delighted by the number of people who came, and by the fact that they all seemed to have a good time; and I loved the reactions I'd gotten to my house (pretty much everyone invited themselves over for the 4th of July and announced their intentions to move into my guest bedroom).

Justin and I took five minutes to rest on the couch, and then we launched into clean-up mode, knowing that it would only be worse if left until morning.  We collected the trash, put the food in containers, and wiped down the tables.  Everything else we left for later.

It was a lot of work to put together but also a ton of fun and super rewarding -- and it makes me want to throw more parties!  I'm already looking for excuses to host other gatherings, and I can't wait for the 4th of July!

Congrats on a fabulous party! Love the goldfish crackers.