This time last week, I was on my way to the airport to catch a flight to Boise.  I'd found a good promotion on Alaska Air a few months ago and decided to seize the opportunity to shore up my position as the Favorite Uncle and catch up with my awesome twin sister.

How did I do that?

Well, to start with, I showed up on Heather's doorstep first thing on Saturday morning bearing donuts, Easter candy, and enough Nerf guns (and extra ammo!) for everyone.  There were hugs, then cheers, then all-out warfare . . .

It was all fun and games until someone lost an eye -- at which point we paused long enough to remind everyone that eyeballs really aren't all THAT important and that winning is really what really counts, whereupon fun and games resumed full force.

Once all the ammo was lost behind couch cushions and/or squirreled away into various stockpiles, we decided it was time to move on to a super nutritious breakfast of donuts and maple bars.  Yum! 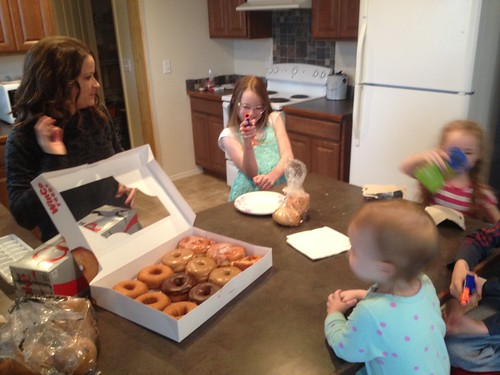 Then the agenda shifted to what Heather had planned:  an excursion to Table Rock.  She'd hoped we could all hike up there, but the weather was cold and rainy so we just drove up the back of the mountain instead.  Visibility wasn't great, but we got a sense that on a clear day the view would be spectacular. 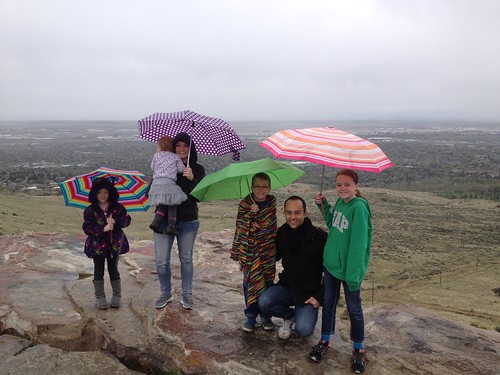 And of course we couldn't leave without exploring the caves!  (And deciding how we would decorate them and who would sleep where and where the books would go and what we thought of the graffiti.) 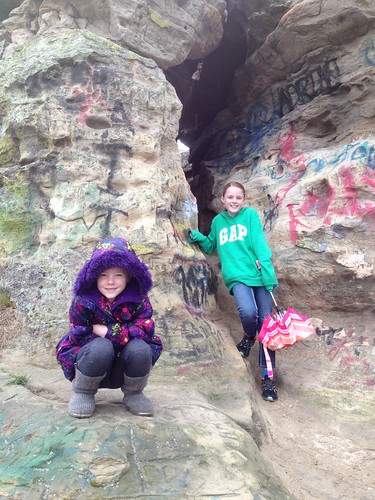 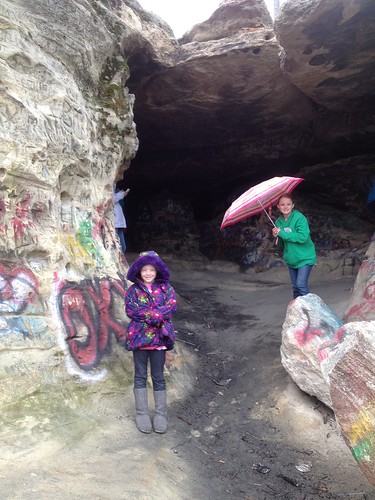 From mountain back to civilization for lunch.  We stopped at Smashburger, where I got a weirdly flattened chicken sandwich.

By that time it was time for Adri to take a nap.  We dropped her off at home with Jordan (who wasn't feeling well) and Jaron (who wasn't up for watching a "girl" movie) and drove off with the girls to see Cinderella.

It was an earnest, faithful retelling of the familiar story, without much additional insight or different perspectives to add interest.  But there was Cate Blanchett, who I'd definitely want for an evil stepmother if ever I had to have one, and all the gorgeous costumes, AND a few clever little nods to art.  For example, when the prince takes Cinderella out into the garden during the ball, they come upon a rose bush and a swing, and once Cinderella sat down it was basically impossible not to see a reference to Fragonard's famous painting:

After we'd wished fond farewell to Cinderella and her Happily Ever After, Heather and I went back home long enough to drop off the kids before heading back out for dinner, just the two of us.  This is one of my favorite parts of any visit for us -- just having time for the two of us to talk without interruption for as long as we want (which usually means at least 4-5 hours in any given stretch).  Naturally we cover everything under the sun, and it's always fun and meaningful and reaffirms my gratitude for the blessing of being a twin and having her in my life.  I really can't say enough how much I love her. 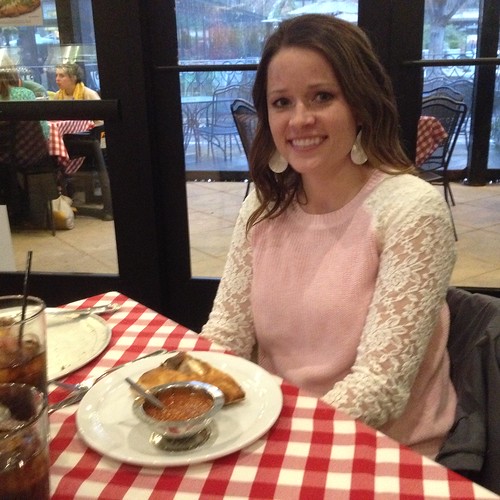 Like Cinderella at her ball, my stay in Boise was short and sweet.  Next morning I came over long enough for breakfast, and then it was back on the plane to Seattle for normal life.  What a great weekend, and I can't wait to see them all again soon!