Easter Weekend: Tulips and concerts and General Conference and baskets of goodies

Did you know that the world's largest producer of tulips, daffodils and irises is right here in the Pacific Northwest?  Well, it's true.  Back in the mid-Twentieth Century, some tulip farmers from the Netherlands immigrated to Skagit Valley (just north of Seattle) and started growing their bulbs in the rich, wet earth.  Now, sixty years later, thousands of acres of Skagit Valley are covered each spring with vast swathes of gorgeous color, like a giant patchwork quilt.  Naturally, the farmers and neighboring villages have capitalized on the tourist draw and created an annual Tulip Festival for the peak bloom period.

When I first met Justin, he told me about the Tulip Festival and showed me some of the pictures he'd taken in previous years.  This weekend he made good on his promise to take me out there to see it for myself.  We left mid-morning on Saturday and met up with Anya, a friend of Justin's, and made our way north toward the tulip fields.  Not surprisingly, given that this was peak tulip season, a holiday weekend, and gorgeous weather to boot, the entire population of the western United States (and southern Canada, probably) had decided to visit as well -- which meant traffic, traffic, traffic.

After we'd inched our way far enough into the village of Mount Vernon to be within walking range of Calico Cupboard Cafe and Bakery, we parked our car and walked.  As per usual, we were on the verge of starvation and found it necessary to devour a giant cinnamon roll instantly upon arriving.
﻿ 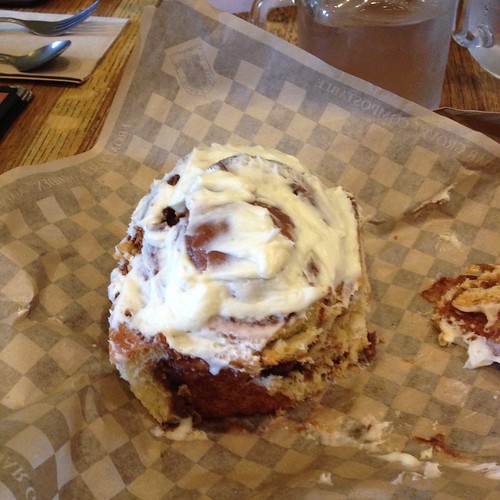 The cinnamon roll was delicious and gooey and ﻿﻿wonderful in all ways, and it whetted the appetite nicely for the tasty, savory hash that followed.

﻿
With a hearty lunch like that, we needed to get out and see some tulip fields!  Hoping to avoid the worst of the crowds, we skipped the biggest tulip farm and found one a little further out called Tulip Town.  We paid our entry fee and were ushered into a hall-o'-kitsch . . . 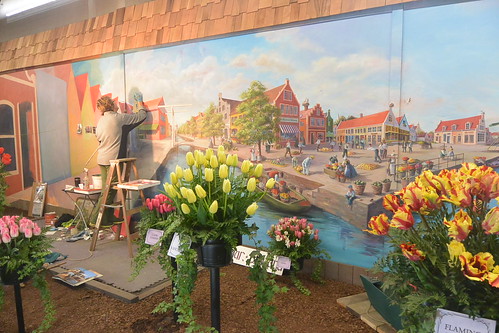 . . . and out to the back fields, where a cheerful little windmill awaited. 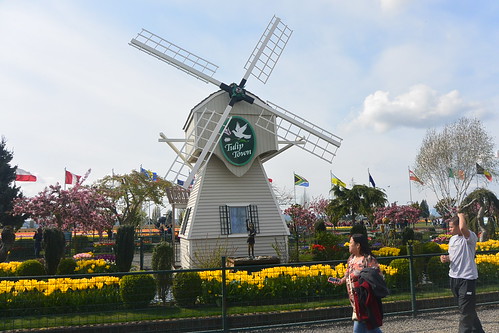 Interestingly, next to the windmill was also a little enclosure with a plaque in honor of the "Hispanic Crew" that helps maintain the fields.
Spread out in all directions behind the windmill were the fields of blooming tulips.  The effect was glorious. 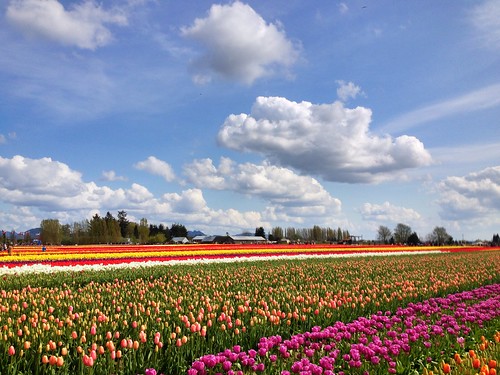 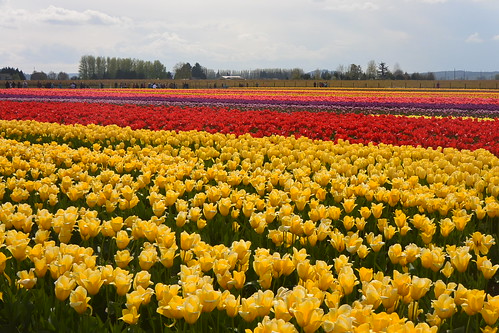 The crowds weren't as bad as we had expected based on the amount of traffic, and for the most part they followed the rules of no picking the flowers or wandering out into the rows.  We pulled out our cameras and snapped the obligatory selfie . . .
. . . and then got down to work with our "serious" photography. 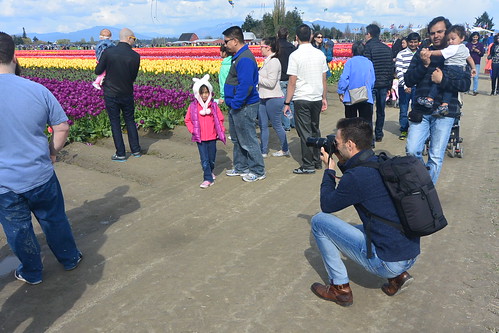 I started out trying to capture the feeling of walking through a terrestrial rainbow.  I really loved the giant blocks of color and seeing how they narrowed into stripes as they spread into the distance. 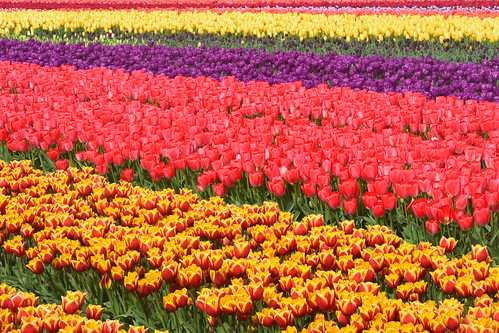 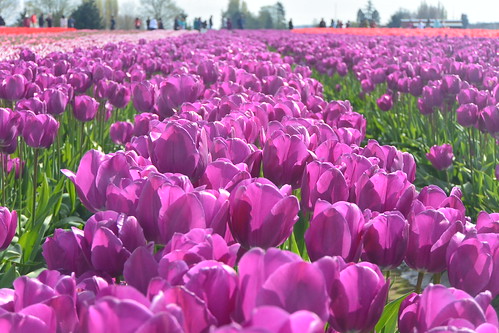 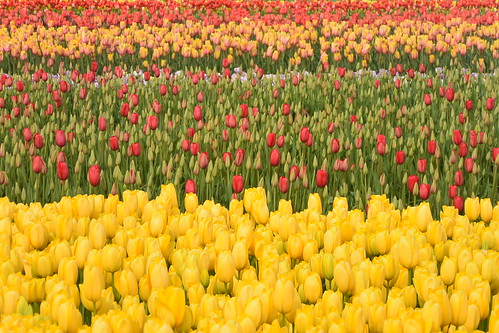 Then I focused more on the textures and patterns -- and anomalies -- of so many repeated blooms in one place. 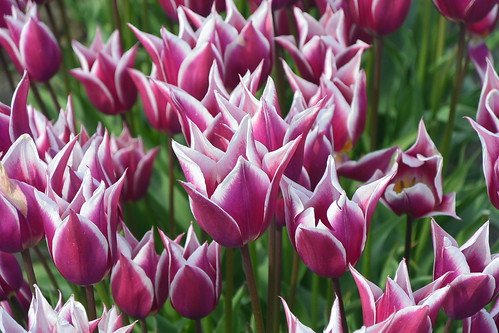 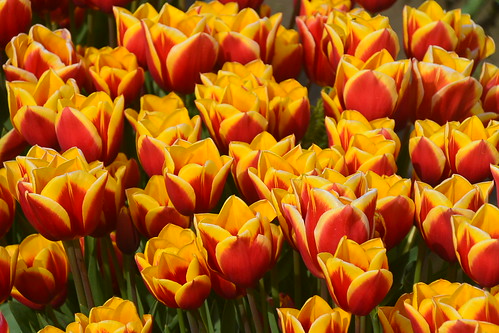 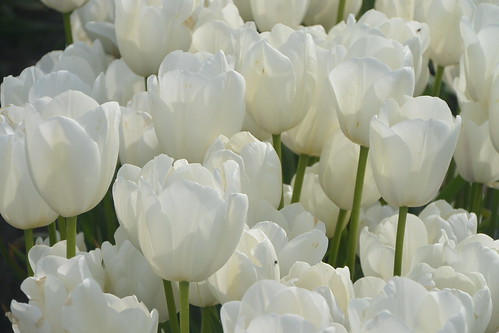 I also tried to focus on the individual qualities of certain types of tulips, and even individual blossoms. 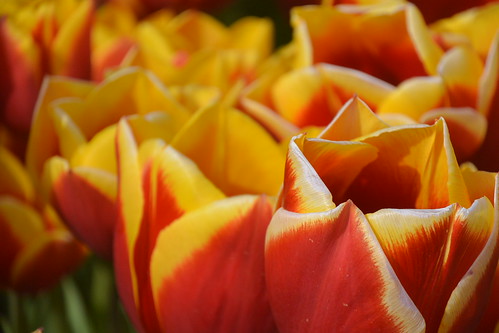 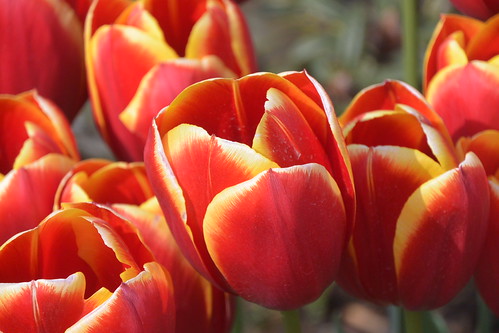 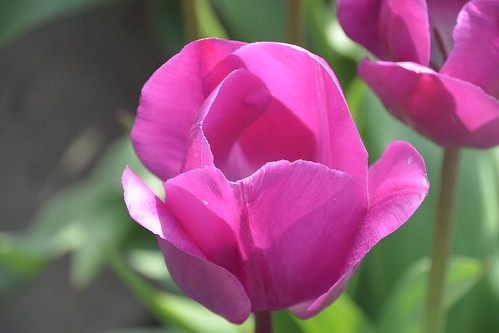 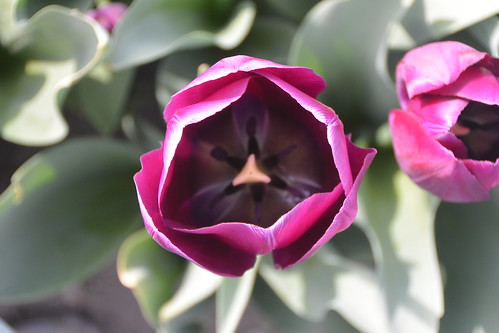 By the time we had made it all the way around the field, we were getting chilly in the cool spring wind and our photos started to all look the same.  So we found Anya again, bought several bunches of cut tulips, and headed out.

We thought about visiting some of the other farms, but lunch had worn off and we felt unmotivated to keep fighting with traffic and parking.  So like the good little Mormons we are, we set our sights on Café Rio for an early dinner.

We separated after dinner.  Anya stayed up north to visit her family; Justin and I headed back down to Seattle.  We stopped by my place long enough to change our clothes and throw the flowers into water before driving downtown to Benaroya Hall.  The last installment of my season's subscription to the Seattle Symphony was a really delightful performance of Chopin's Piano Concerto No. 2 and Prokofiev's 5th Symphony.  I hadn't heard the Chopin before, but the pianist was fantastic and really captured the brilliance and lyricism that Chopin is known for.  The Prokofiev is an old favorite of mine from back in college, when I first performed it with the University of Utah's orchestra. 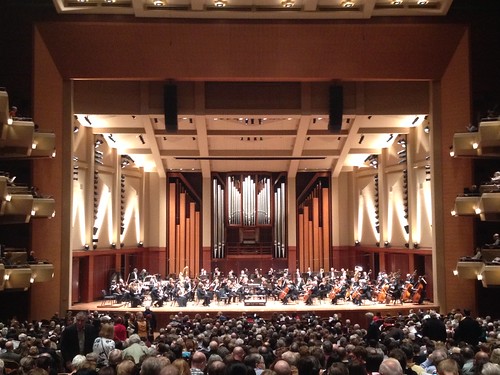 Next morning was Easter, and the weather was gorgeous.  Justin and I watched the morning session of General Conference and enjoyed the sun and tulips from the day before. 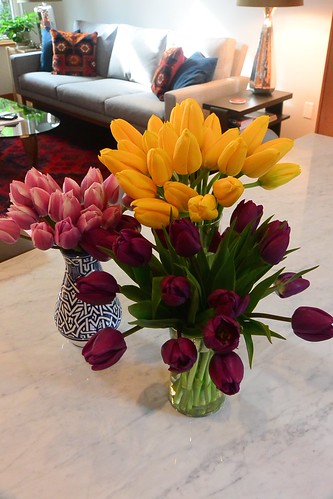 Unfortunately, we weren't able to listen to the afternoon session of Conference.  Justin's parents had invited us to Easter dinner at their house on Bainbridge Island, so we were in transit on the ferry instead.  But Easter dinner was great, and it was fun to spend some time getting to know Justin's family better -- and I was surprised to find an Easter basket waiting at my place on the table.  I haven't had an Easter basket since I was a kid!

By the time I got back to my house that night, I was tired and hadn't finished most of the chores that I "needed" to get done over the weekend.  But I felt happy and blessed to have been able to enjoy the beauty of God's creations, the messages of great church leaders, and company of good people.