We got up early on Sunday morning and headed back out to the Division Street neighborhood where we'd been the day before.  Vanessa had recommended Pine State Biscuits as a good place for lunch, so we thought we'd check it out.  In what began to feel like deja vu, we stood in line for a long time waiting to get in.

By the time we got in and seated with our order, we were more than ready for some delicious biscuits and fried chicken.  They were tasty, but not quite to the level that would warrant the crowds and the waiting time.  I'm willing to give them the benefit of the doubt and assume that we didn't order the best thing on the menu.

Leaving chicken and biscuits behind, we made our way to the Portland Japanese Garden, which is reputed to be one of the better Japanese gardens in the Pacific Northwest.  It's perched high on a hillside and has lovely meandering paths around the water features and plantings.  Our reactions were mixed:  I thought the general plantings lacked some of the miniature wildness that the gardens we saw in Japan had; they just felt tame.  And the zen rock garden clearly was intended to fall into the tradition of Ryoanji, but we both felt it lacked the abstraction and design sophistication of Ryoanji.  On the other hand, the moss and winter flowers were lush and gorgeous. 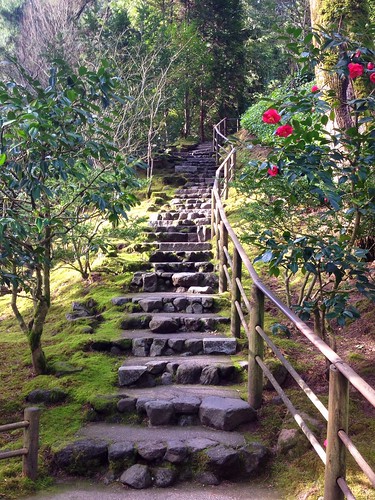 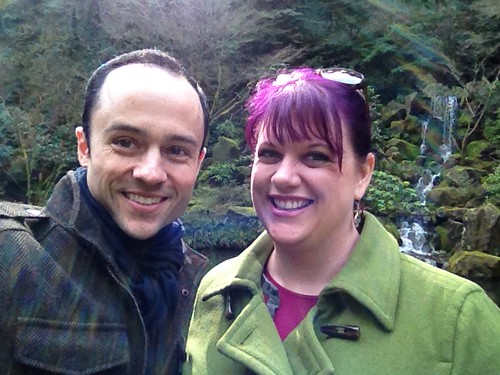 From the garden we headed back downtown to visit the Portland Art Museum.  We had passed the museum the night before on our way to our Valentine's dinner and seen that they had a special exhibition on Italian Style: Fashion Since 1945.  We were intrigued and wanted to check it out.

Turns out, the exhibition was pretty interesting.  It looked at the fashion industry in Italy from the end of WWII, when the country was in poverty and ruins, to now, when Italy ranks with France as one of the top fashion powerhouses in the world.  There were lots of lovely dresses (and a few less lovely men's suits), and I enjoyed learning the history.  I didn't see any real standouts, though, among the pieces that were on display, and I found myself missing the really exciting, provocative fashion exhibits that the Fashion Institute puts on at the Metropolitan Museum of Art in New York (such as the Punk exhibit I saw in 2013).

On our way out of the museum, we noticed that another temporary exhibition, which we had thought was already gone, was still on display.  This one was a display of porcelain figurines by Chris Antemann called Forbidden Fruit, and I really loved it because it was smart and skilled and beautiful; I came away having had both an intellectual and an aesthetic experience.  Essentially, the artist took the stuffy, kitschy tradition of porcelain figurines and reworked it with a modern sensibility.  It was witty and beautiful and a little inappropriate in its own right, but it also was deeply in conversation with important strands of art history and decorative arts traditions, from the 300-year-old Meissen firm that makes the porcelains to the Rococo French painters Watteau and Boucher to the age-old stories of the Garden of Eden.  And I also appreciated that it represented extremely fine workmanship -- this is the sort of contemporary art that does not appear to be something that any fourth grader could have made.


We didn't have time to see anything else in the museum because we were on a tight schedule to get back to Seattle.  I have seasons tickets to the Village Theatre in Issaquah (a suburb of Seattle), and we were on deck to see their production of Around the World in 80 Days -- an appropriate topic, don't you think, for the two of us? 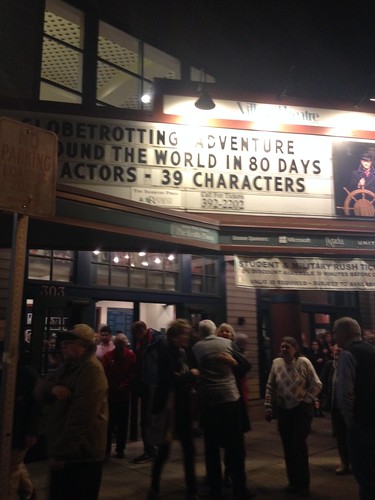 The production was fine, but the play was mediocre.  The plot basically consisted of "first we went to a place, and then we went to another place", which meant it was kind of boring.  And the poor female character suffered from having been written in the 19th Century.  But still, it was fun to see a show with Amanda -- and it meant we had something to discuss on the way back home for the night.

And that was it for our weekend!  Amanda took off the next morning back to Denver, which means it's time for us to figure out our next adventure...