The cycling season starts early in Seattle!  Every year on the last Sunday in February, thousands of cyclists turn out for the Chilly Hilly on Bainbridge Island in the Puget Sound.  It's a short (33 miles) ride and, as you might have guessed from the name, famous for it hills and chilly weather.

I had heard about the ride last summer from some friends who live on the island but had forgotten all about it (a convenient thing to do when it's cold and dark and rainy outside).  But then last Wednesday, Colin (a friend of mine from law school who now lives here) asked if I was planning to ride -- the weather was forecast to be clear and registration closed that night!  Of course I signed up.

I spent the next couple of days wondering whether I had enough cold-weather cycling gear to survive.  After a quick inventory of my various tights, arm warmers and gloves, I discovered I was better equipped than I'd thought.  One quick trip to the bike shop for some toe covers and a new pair of gloves, and I was set!

Sunday morning dawned crystal clear and super cold (about 36 degrees F).  Colin picked me up and we headed down to the ferry terminal, where we collected our packets and waited in line with several hundred other crazy people.


The ferry ride is only about 30 minutes long, and we rode right off the boat.  That's when I realized that I'd forgotten my bike computer at home in its charging station and was faced with this terrible existential question:  If you ride a race without a satellite to track your route and your speed and your elevation gain and elapsed time, HOW DO YOU KNOW YOU'VE RIDDEN THE RACE AT ALL??  You don't.  I stopped on the side of the road and tried to emergency download an app to track all that for me, but alas! no use.  The app didn't work and so I have basically no record of the ride.

Colin, on the other hand, had an app that worked just fine, so here's his map of the route we rode:

It was a terrific little ride.  Although the air was cold, the sun was bright and clear and warm.  And the notorious hills came fast and often, so there was no time to get bored or cold even in the shadows.  The crowd was a little annoying at first -- the ability level was all over the place, and so you'd have people stopping to walk or swerving out into the middle of the road suddenly -- but eventually I passed those people and settled into a good pace that was fun and fast.  At least, I assume it was fast.  Without my computer I can't say what my average speed was; all I know is that only six people passed me in the course of the ride, and more than one spectator waved at me shouting "SLOW DOWN!! THIS ISN'T A RACE! IT'S NOT LIKE YOU'RE GOING TO WIN ANYTHING!!"  To which I said, "Screw you! What's the point of riding up a giant hill if you can't ride fast down the other side?"  I finished in a little under 2 hours (which, by comparison, is about an hour faster than Colin and the other guys I started with).

The best thing, though, was the scenery.  Bainbridge Island is a gorgeous, lushly forested residential community with beautiful homes and by breathtaking views of the Puget Sound, Seattle, and snow-capped mountains all around.  I kind of regret that I didn't stop to take more pictures.  I guess that's what I get for going fast...

By the time I reached the end of the race, my legs had definitely decided that they were done riding hills.  They cramped and spazzed and it was pretty hilarious how painful it was to walk like a normal person.  I thought perhaps a bowl of chili would help the situation, but it turns out chili was not included in the price of my registration, so I stuck with the granola bars I'd brought with me. 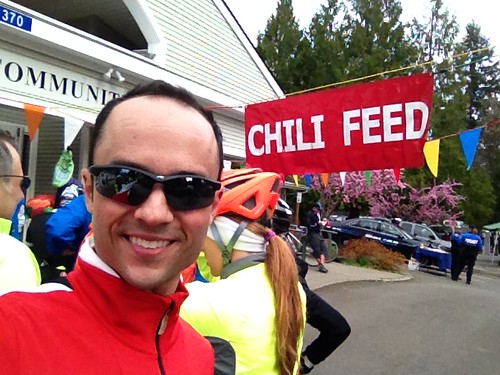 Fortunately for my spazzing legs, I didn't have to head back to Seattle on my own.  My friend Justin is from Bainbridge Island, and he had come over on a later ferry to meet me at the finish line.  We threw my bike into Justin's car and went to his parents' house to clean up and have Sunday dinner with his mom and brothers before heading out for a quick tour of the island.

Mostly we just drove around looking at the homes and shorelines that I'd glimpsed during the ride.  We stopped at Bainbridge Gardens (a lovely little nursery, where I bought a plant but took no pictures) and Bay Hay & Feed (an eclectic general store of sorts, known for its t-shirts and other products with repeating patterns of small animals).

Then we stopped for photos at the so-called Frog Rock.  I'd seen it on the ride, when it had been thronged with cyclists posing for selfies, so I thought it worth a second pass.  (I hadn't even noticed the ladybug rock the first time around.)

﻿ We had intended to see a few more things on the island, and had hoped to stop at a famous ice cream shop, but Sunday evening rush hour foiled those plans.  By the time we got back to the downtown area, we discovered that the ferry line was already super long.  We got in line and waited for a couple of hours before we could board -- so instead of ice cream, we bought hot dogs and chili from the ferry restaurant and made plans to go back for ice cream and real food another time.