Just kidding.  That would be super weird and kind of biologically impossible.  But given that this news has prompted my parents (who don't travel except for grandchildren) to start planning a trip to visit me, I guess it's basically the same thing.  So here's the real news:

[Warning: I am now going to tell you the story of my life, so if that sounds boring to you, feel free to skip to the photos below. Don't worry, no judgment -- I'd do the same.]

I started looking about a month ago, right after I got back from Japan, and never in my wildest dreams did I expect it to go this smoothly.  The Seattle real estate market is notoriously tight right now, with very little inventory and hordes of Amazonians pouring in from around the country.  My realtor, my coworkers and the Internet told me to brace myself for the worst:  months of hunting, ridiculous bidding wars, out-of-staters who swoop in and buy a place with cash for more than the asking price.

Nevertheless, I jumped right in.  The first week, I told my realtor that I wanted a super chic glass box in a downtown skyscraper with views of the Puget Sound, a balcony, and walking distance to work.  Then I discovered that there are only, like, two of those in all of Seattle, and they both cost a fortune (more a function of outrageous HOA dues than actual purchase price).

So for the second week, we expanded to townhouses, which was basically an "out of the frying pan and into the fire" move.  Sure, the townhouses solved the HOA dues problem, and I loved the modern  architecture of the new construction, but they tended to have crappy views, no privacy, and weird neighbors (I"m sorry, but I don't want to live next to a boarding house for recovering alcoholics).  Dang it.

By this point I was feeling downtrodden and full of woe -- this real estate project was sucking my will to live.  Also, I was super annoyed with my realtor.  I felt like I was doing all the legwork in identifying the properties and he was my glorified chauffeur.  So we had a little come-to-Jesus, where I was like "dude, I know I told you that I wanted a glass box in the sky within walking distance to work and a bunch of other basically impossible characteristics, and I realize I might be coming across a little high maintenance right now, but I need you to step up your game and sell me a freaking awesome house, stat."  The "or else..." wasn't spoken, but I think he got the hint.

So, week three:  My realtor gets some religion and takes me out on what finally felt like a real house hunting trip.  He focused on three new neighborhoods that were just outside the walking range from work, but which otherwise seemed to match what I was looking for:  Cool, walkable neighborhoods that weren't full of druggies or moms with strollers.  He also stuck with the modern townhouse theme that had initially seemed so promising the week before.  And, lo and behold, a Christmas miracle:

The first place we went was unlike anything else we'd seen before.  One of seven townhouses in a development, the place had beautiful interiors with clean lines and a great floor plan, high quality materials and appliances, and a to-die-for rooftop deck.  When I got home, I did some digging and learned that the development was called Footprint at the Bridge and had been designed by some fancy architects, had full LEED Platinum certification, and had been written up in some architecture magazines.

Intrigued, I went back that night and again the next day (I totally stalked that place).  I prowled around the neighborhood and discovered that the house is only a couple of blocks from the Burke-Gilman Trail (Seattle's main cycling/running trail), the famous Fremont troll, a Crossfit gym, and the eclectic cluster of shops and restaurants at the heart of the Fremont neighborhood.  What's more, the central location meant it's only a short drive to work and basically every other cool neighborhood in the city.  Less than twenty-four hours later, I knew I wanted it.

And by "I wanted it", I mean "holy cow I had to have it or I might as well move to the suburbs."  I was convinced that 47 other people were going to swoop in and buy it up instantly, so I told my realtor to put together an offer that was attractive but not desperate.  We came in under the asking price but offered a decent downpayment and a quick closing schedule -- and made it a 24-hour exploding offer.  The next 24 hours were nail-biters. I basically felt like I was the protagonist in every teenage romance ever: "Do they like me? Am I cool enough? What if they hate me? Did I come in too low? Am I letting them take advantage of me? Why is my life so hard?"

The nice thing about an exploding offer it that it cuts the suspense short.  By Monday afternoon I'd heard back from the seller:  They accepted my offer in its entirety.  No negotiation.  AWESOME!!

And so, without further ado, here's what you've been waiting for all along:  Photos of the future chez moi: 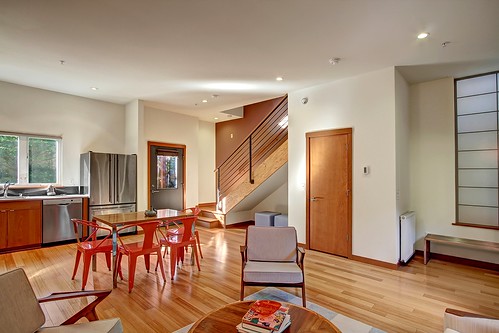 I'm super excited about finally having a place of my own.  Believe me, this is just the beginning!!

Congratulations on your "parenthood"!

Okay. First things first--it is beautiful and looks like it was made just for you! Love the lines and the tones! You will do great things with that! The only downside? If you have to have to have a C-Section, those stairs are gonna suck.