The Olympic Peninsula is this fantastical place on the other side of the Puget Sound from Seattle.  It's home to a famous rain forest (they get about 200 inches of rain there) and sparkly fictional vampires (the Twilight books are set in the town of Forks) and not enough decent hotels -- or so my friend Ruth and I discovered when we tried to make last-minute plans for a weekend hiking trip.  Turns out the peninsula is a popular weekend destination and books up fast!

So instead of a weekend trip, we shifted to day-trip mode and set our sights on the Dungeness National Wildlife Refuge.  The refuge sits at the top of the peninsula, only about 2 hours from downtown Seattle, and is known for the Dungeness Spit -- basically a giant sand bar that juts out into the Strait of Juan de Fuca.  A little over 5 miles long, the spit is one of the longest spits in the world, and it's one of the more popular day-trip destinations for Seattle-based hikers. 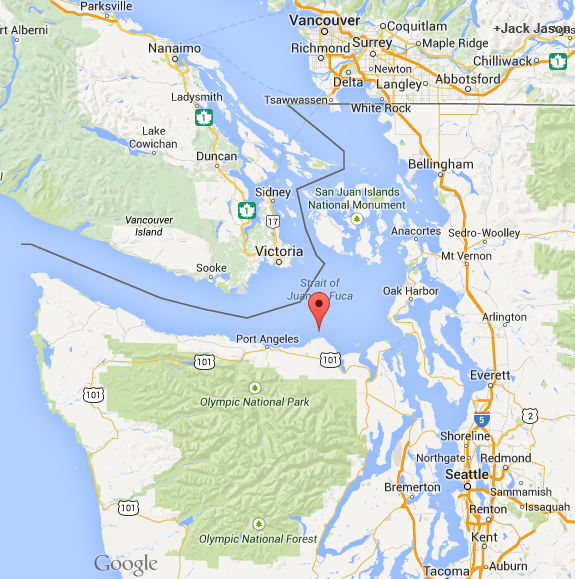 The first leg of the trip was a ferry ride from Seattle to Bainbridge Island.  Naturally we decided to take the first ferry of the day -- at 6:10am.  The 5:00am alarm seemed mighty early, and I was tempted to text Ruth and tell her to meet me for the later ferry -- only then the fire alarm went off and forced an evacuation of the building.  I grabbed my hiking gear and climbed down the thirteen flights of stairs onto the sidewalk, where I must have looked oddly suspicious to my sleepy, pajama-clad neighbors when I climbed, fully clothed and equipped, into Ruth's brand new BMW a few moments later.

We made our way to the ferry terminal and climbed aboard.  The morning was cool and soft; the dawn-colored mist shrouding the city as we pulled away. 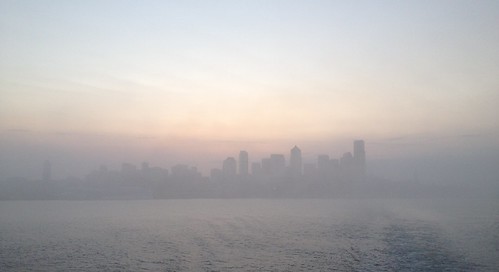 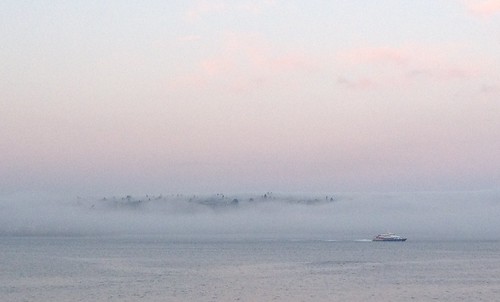 We pulled into the harbor at Bainbridge Island about thirty minutes later.  The mist had turned to fog, and the place felt cold and damp.  We started our engine and drove onto the island and into the grey wilderness. 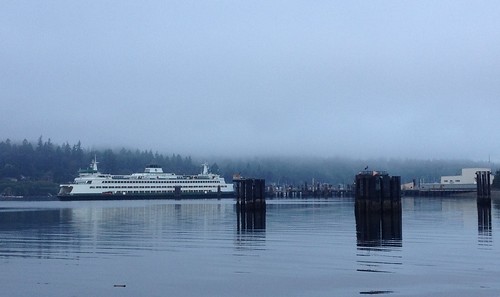 The fog was thick enough that we saw very little of the countryside until we got to the little town of Poulsbo.  There the clouds parted and we discovered an adorable little Scandinavian-settled village full of flower boxes and a delicious bakery. 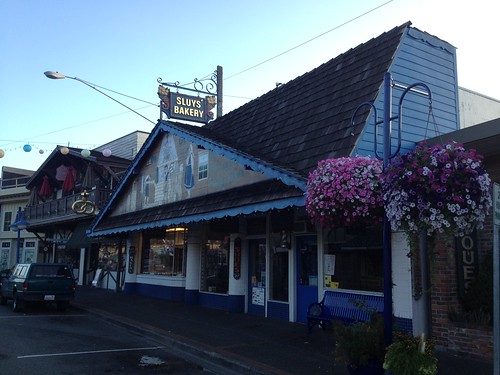 The baker recommended this donut -- it's both layered and raised and buttery and glazed.  I had expected something closer to a croissant than it was (it basically tasted like an ordinary donut), but it was still delicious.  Hard to go wrong when fried dough is involved. 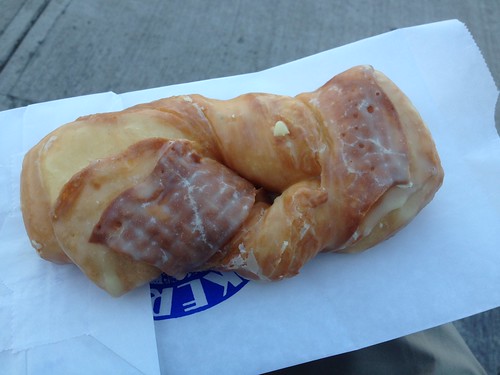 We ate our super-healthy breakfast of donuts on a bench overlooking the harbor.  The view was pretty, but the sun was blocked by the hill behind us, and I nearly froze to death.  Even if I hadn't been rushed out of the house by a fire drill, I still wouldn't have thought to bring a coat and gloves and long pants for a mid-August hike at sea level.  Oh, the Pacific Northwest! 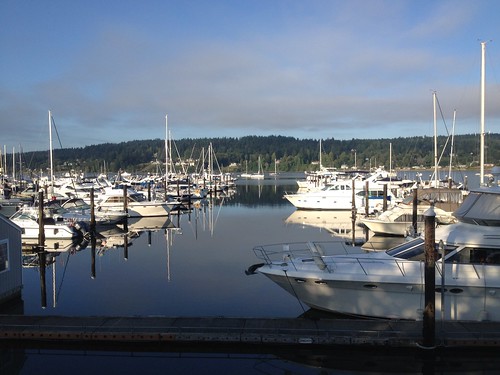 Leaving Poulsbo behind us, we drove back into the bank of thick morning fog, which stayed with us all the way to the coast.  We arrived at the trailhead and made our way to the beach.  The mist was only just starting to burn off under the warm rays of the sun. 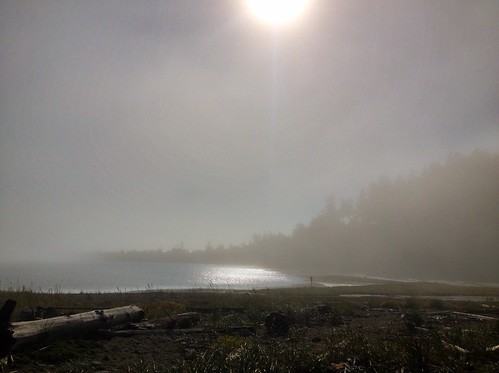 This was beach hiking at its most literal:  The Dungeness Spit stretched out before us, a narrow, sandy strip of land covered in driftwood and seagrass.  By the time we'd gone a mile or so, the fog had cleared and we could take in the beautiful views of the coastline behind us. 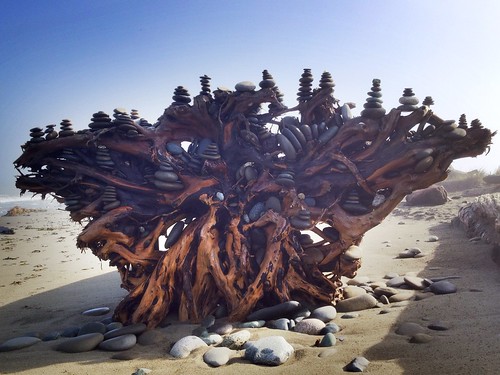 At the end of the spit -- 5.5 miles out from shore (so far that Verizon thought I'd left the country; they sent me a text welcoming me to Canada and informing me of the roaming charges...) -- stands a picture-perfect white lighthouse.  Complete with red roofs, bright green lawn and a shining white tower, it felt like something in a novel or a movie. 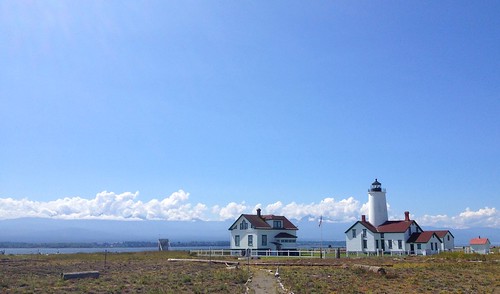 We stopped at the lighthouse for lunch -- and by "lunch" I mean "the other pastry I'd bought in Poulsbo".  This one was called the "Viking's cup" and was basically a cinnamon roll with rich cream cheese frosting.  Super delicious and not at all what you'd normally eat on a hike. 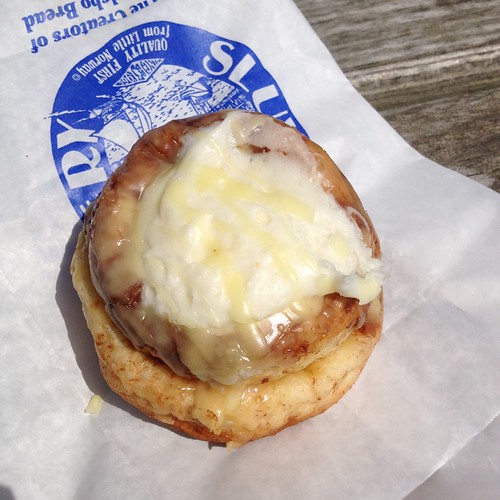 We ended up sitting at the picnic table there for a long time.  The lighthouse sheltered us from the chilly sea breeze, so we could enjoy the sound of the waves and warmth of the sun.  It was so peaceful and remote, a real world apart.  I think we both could have stayed there all day long...

But we didn't.  After a short nap on the lawn, we walked the 5.5 miles back to the mainland.  There was no other path than the beach we'd walked along on our way to the lighthouse, but we were surprised over and over again by the things we noticed on the way back that we hadn't noticed before.   Dead seals, colored stones, the way the clouds broke over the Olympic Mountains as they marched toward the water.  It was as beautiful and refreshing on the way back as it had been on the way out.

In particular, I was struck by how beautiful the colors were -- all those blues, grays, tans, whites and greens.  So fresh and so clean!  And oddly close to what I'd been mulling over for paint colors for my new house over the past week.  I kind of wanted to come back with a fan deck and start matching colors... 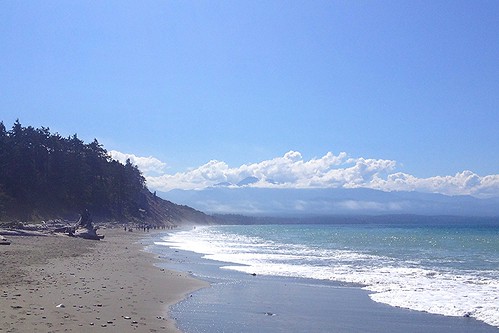 The drive back home was less picturesque and a little more of an adventure than the morning's journey.  We stopped around 4:00pm at the John Wayne Marina for dinner and discovered that we'd hit the dinner rush among the local retirees.  A little while later we learned that the line for the ferry back to Seattle had a wait of more than 2 hours -- so we took a detour and drove around the bottom of the Puget Sound.  A less fuel-efficient path, for sure, but so much better than waiting for 2 hours in line for the ferry!