Bee in my bonnet

I have got to stop getting stung in the face by bees.  It hurts like heck and makes me look like Quasimodo, only with the hump on my forehead instead of my back. 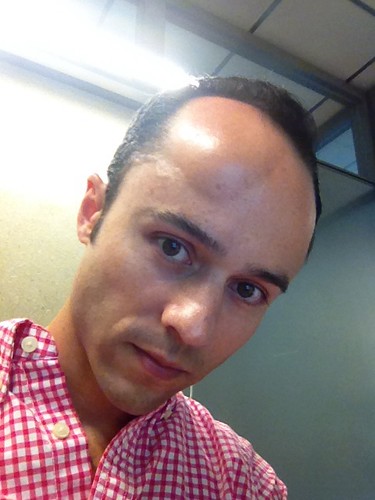 How did this happen, you ask?  Well, I was about 5 miles into my 70-mile bike ride on Sunday when a bee flew into my helmet, got trapped next to my skin, and started stinging.  I stopped the bike and ripped off my helmet so fast it's a miracle I didn't crash, but it was too late:  All I could do was pull the stinger from my forehead and scrape the crippled bee from the inside of my helmet.

I continued on my way and discovered that bee stings to the forehead have a peculiar life cycle:  At first they barely hurt at all.  Then they hurt a lot (but not so much that you'd stop the bike).  Then they hurt so much they redefine what "a lot" means (seriously, when your entire head is throbbing it's tempting to turn around and go home, only what are you going to do when you get there, cry about it?).  Then they stop hurting and disappear and you forget you got stung by a bee in the first place (remember how I didn't even mention this in my write-up of the ride?).

But then, THEN! TWO DAYS LATER, the bee sting comes back to life and goes all British in its efforts to colonize my entire head -- by now it's conquered about a third of that vast expanse.  It itches and hurts and feels weird when I make facial expressions.  And since it's not discolored, people don't realize that this is the result of a horrific, crippling, wild animal attack until I point out to them that I'm basically turning into a Klingon.  "Oh," they say, "I just thought you had a lopsided skull."  As if that were any better.

So I'm sitting in my office trying to avoid external meetings and smearing hydrocortisone cream on my nascent unicorn horn, hoping that it will all go back to normal soon (and/or that I will wake up tomorrow with superpowers and ripped muscles).

Email ThisBlogThis!Share to TwitterShare to FacebookShare to Pinterest
Labels: Trials and Tribulations

So sorry! I'm not aware, but is this a common mishap for bike riders, or are you just the lucky one? In all my bike riding experiences, I've never had a bee sting.

The Star Trek comment warms my heart! Interesting note: the writers of TNG/DS9 had to develop a plot line about the "Augment Virus" to ret-con an explanation why Original Series Klingons had no forehead ridges... you must have caught the converse, because you're developing quite a forehead.

Yes, I am a nerd, but you knew this. And I also hope you feel better!

It's the sunscreen! Or maybe that stuff is alien to Seattle due to the dearth of sunshine.