This third leg of the journey -- from Rapid City, South Dakota, to Missoula, Montana -- was the longest yet.  That was largely my own fault.  After a 16-hour slog the day before, the predicted 10-hour drive seemed like nothing.  Hey, I thought, why not relax a bit and soak up some of the local history and attractions?

The first of these attractions was Mount Rushmore.

Located just under an hour outside of Rapid City, Mount Rushmore is a random mountain in the middle of nowhere into which the likenesses of four American presidents have been carved in monumental scale:  George Washington, as the "Father of the Nation"; Thomas Jefferson, who dramatically expanded US territory through the Louisiana Purchase; Abraham Lincoln, as preserver of the Union; and Teddy Roosevelt, for his role in completing the Panama Canal. 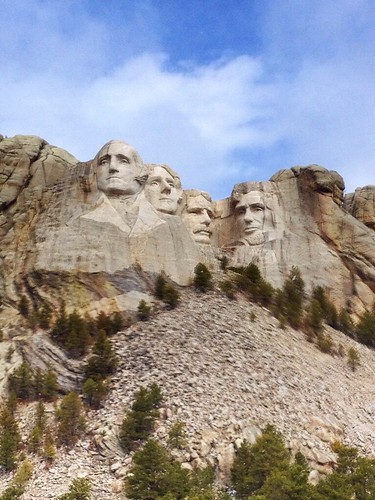 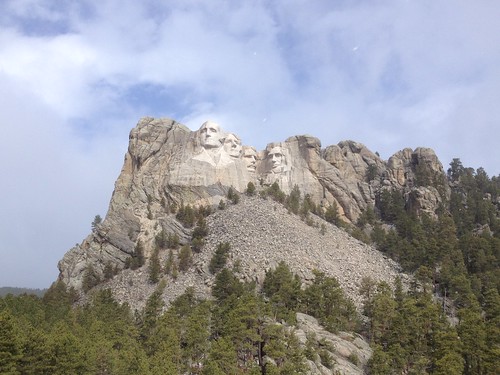 The monument was both impressive and weird.  Impressive because of its scale and apparent permanence; weird because, seriously, of all the mountains in the United Sates, why on earth would they choose this one?  It's not even close to civilization!  The monument also struck me as a vestige of a different era.  Work began in 1927 and was completed in 1941, and it was a favorite project of influential politicians in Washington, DC.  Today, less than 100 years later, it's hard to imagine a project of this sort gaining any such support, let alone getting through any conservationist legal battles.

Speaking of conservation, the mountain is surrounded by a national park that is a refuge for mountain goats.  Some of them grazed, unphased by humans, just off the path leading to the viewing platform.

After Mount Rushmore, I jumped in the car and drove through the rest of South Dakota, all of Wyoming, and into Montana.  I'd never driven that route before, and I was curious to see what it looked like.  Unfortunately, I still have no idea -- the weather was so bad (pouring rain, snow, wind gusts over 60 miles per hour), and visibility so low, that all I could see during most of that segment of the drive was the road right in front of me.  Every once in a while the clouds would lift and the rain would stop long enough for me to catch glimpses of a vast, moody, virtually uninhabited landscape. 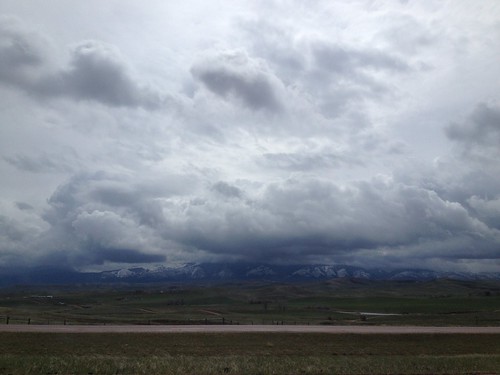 The towns out here were few and very far between.  When I was still several hours away from Billings, Montana (the next town of any importance), I noticed that I was down to a quarter of a tank of gas.  The exit for Lodge Grass, Montana indicated that the town had a gas station, so I pulled over to fill up.  Now, as I left the freeway, I assumed that Lodge Grass was a town -- but as I approach the cluster of houses I saw that it was a "town" in the same way a few grains of sand are a "beach."

In someplace this small, I expected to find the gas station right away.  Only I didn't; only a few streets of run-down wooden houses and a general store.  I stopped at the general store:

Me:  Hi, is there a gas station in town?

Girl:  Oh, let's see, what day is it?  [looks at the calendar, then back to me, beaming] Yep! It's just across the way in that yellow building.

I went outside and looked for a yellow building.  Sure enough, on the other side of the train tracks there was a yellow barn with a twenty-year-old gas pump out front.  I was surprised that it even took credit cards.

With a full tank of gas, I continued on my way -- only I didn't go straight to Billings.  Lady had called during that monotonous stretch of highway in Wyoming and, after finding my route on her map at home, she noticed that I'd be passing right by the site of the Battle of Little Bighorn, where Custer made his famous "Last Stand" before being wiped out by the Indians.  Sounded interesting to me, so I followed the signs to a wind-swept hilltop monument to the fallen US soldiers. 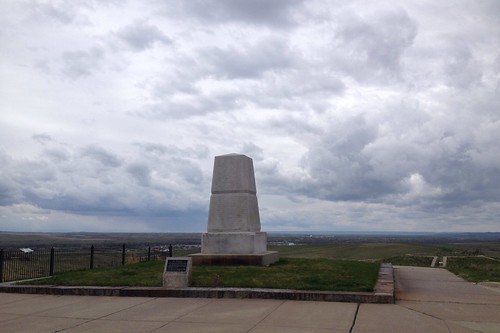 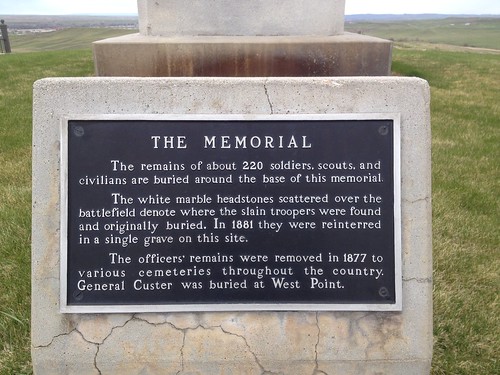 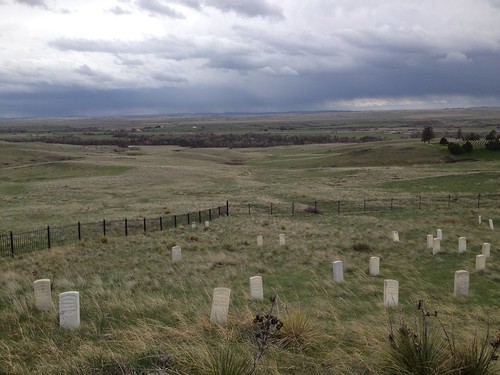 To be honest, I've never really understood how to think about Custer's Last Stand.  It clearly entered the mythology of the American West as a tale of military valor, where the US Cavalry fought valiantly to the bitter end against the wicked Indians.  The monument is clearly structured on the notion that there were the good guys (Custer et al.) and the bad guys (the Indians).  Only now, with a more nuanced sense of history, and a perhaps more inclusive sense of national identity, it seems to me that there were no good guys or bad guys -- just people fighting over land and power and natural resources.  Yes, the Indians were violating the terms of the treaty with the US government by leaving their designated reservations; but they did so only after the white settlers and gold miners did the same and the US government proved unwilling and unable to uphold its end of the bargain.

It took me roughly an hour to get from Little Bighorn to Billings, and though it was still early in the evening I decided to stop for dinner.  Billings is a real town, and I knew there would be real restaurants there -- I needed a break from fast food!  Thanks to Yelp, I found a cute little cafe called Lilac right downtown.  The ambiance and menu were exactly what I was looking for -- clean and civilized and aspiring to refinement.


And now for a surprise:  While I was eating dinner, I received a note on Facebook from Audra, a friend from high school in Oregon.  She said she and her family were living in Billings and that if I came through I should stop and say hi.  Well, imagine that!  I hadn't seen Audra or her husband, Chris, since 1998.  Sure, I still had six hours of driving to get to Missoula, but why not stop and see them?

So I got Audra's number and address and made my way over to their little house.  I met her three children (the littlest of whom sweetly gave me a big hug, as if I were a favorite uncle) and we chatted for a while in the living room.  Just as I was about to leave, Chris came home from work, so I was able to see him for a few minutes and catch up.  Whatever else may be said about Facebook and other social media, I think that these surprise connections are wonderful.

After bidding farewell to Audra and Chris, I climbed back in the car and got serious about driving to Missoula -- after all, at this rate I wasn't going to arrive until around 1:00am!  Fortunately, I had finally driven out of the terrible weather that had blanketed the plaines.  The setting sun broke through the clouds, dazzling with light and color and promising a clear and speedy drive to Missoula and bed. 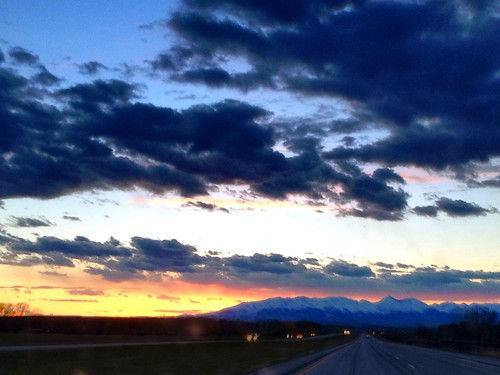 I think a mountain goat would be the perfect companion to your balcony turtle. Plus, free wool!