The Ride: You mean the hike?

What to do the morning after your neighborhood is socked by a derecho?  Go on a long bike ride, of course.  Because what better way to express solidarity with your 1.5 million neighbors who are struggling without power than to venture forth into the heat and humidity with a bike and a couple of bottles of fast-warming Gatorade (knowing full well that you'll be able to come home to a cool apartment and fully functioning fridge)?

The heat and humidity weren't actually that bad.  The night's tempest had dramatically reduced the temperature and cleared the air.  In fact, as far as the air was concerned, riding conditions couldn't have been better.

The situation on the ground, however, was a totally different story.  I had expected some storm debris; what I found looked more like Armageddon.  The path was blocked by one fallen tree. 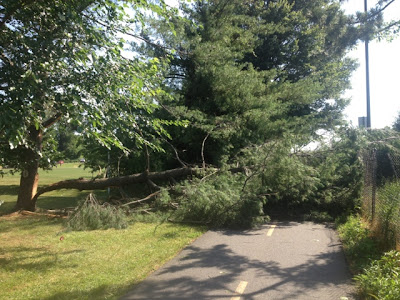 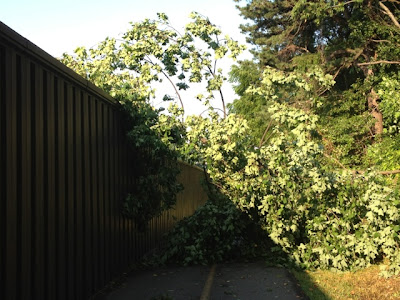 And then by what appeared to be an entire fallen forest. 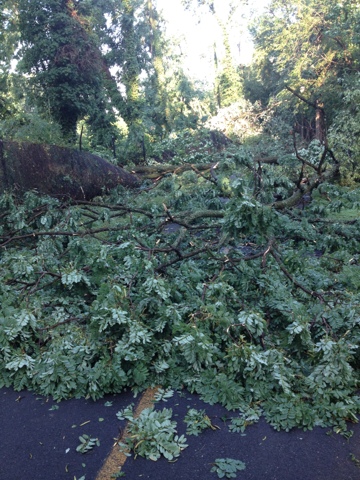 At which point I realized that going for a "ride" may have been the wrong goal.  Instead, I felt more like a hero in a mash-up between a natural disaster movie and a comic book movie -- here I was, masked and helmeted in a bright spandex suit, wading undaunted through the wreckage of my world with a bike slung over my shoulder like a superpower. 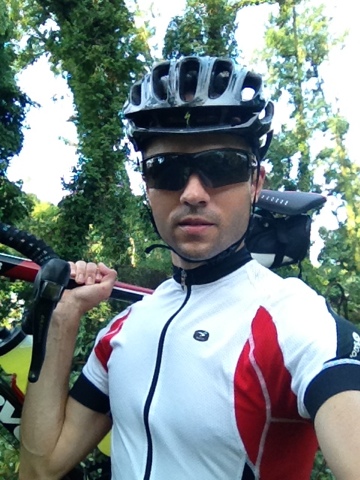 Unfortunately, a bicycle on one's shoulder is not actually a superpower.  And those silly bike shoes made tromping over the woods less fun than it could have been.  So when I'd gone about a hundred yards in my post-apocalyptic superhero mode and the path ahead still looked like this . . . ﻿ 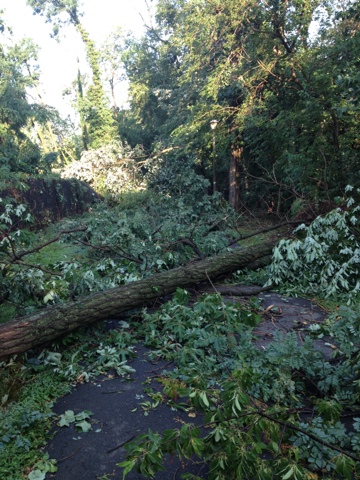 . . . I decided to abandon that narrative and go back to my Saturday morning bike ride.  I crashed through the underbrush until I got to the neighborhood on the other side and continued my ride through the tamer residential neighborhoods of northern Virginia, rejoining the trail some miles later where the storm hadn't it it quite so hard.
Posted by JJD at 6:30 PM

Wow! I didn't hear anything about this... We got a 10 minute thunder storm up here and about 7 rain drops. What a mess! I like the bike as a superpower idea though! :) (btw... swim goggles come in very handy for sandstorms. And cutting onions. Just thought I'd throw that out there)

This storm made the news here in Vegas! Wondered if you were one of those without power. Glad you were not! Looks like you could have used a chainsaw as an accessory on this "ride". I recommend swim goggles on rides though down pours... Lady