DC is a city that loves (LOVES) traffic-disrupting, high-crowd events.  It makes for a vibrant city; there's almost always something going on during any given weekend.  But it also makes for surprises when yours truly forgets to check the happenings calendar before driving into town.

For example, yesterday I needed to drop off some dress-shoes for resoling at the shoe shop.  So I headed downtown and found myself in a sea of Girl Scouts and their leaders.  They were everywhere.  Turns out, this weekend was the Girl Scout National Jamboree, so there were literally 250,000 Girl Scouts swarming across the National Mall and throughout the downtown area.  It was an astonishing sight (both for the numbers and colors, but also for the size of the bodies in those shirts -- no way could you look at that crowd and not think that we have an obesity problem in this country).

I missed the best photo ops because I was driving, but the crowds were still heavy once I got into the metro station (I decided to park because all the charter buses, plus the flocks of women/girls in streets, made driving insane).
When I got out of the metro I found myself in quite a different sort of crowd.  Lo and behold, the Gay Pride parade was wending its way through the city.  (No obesity problem here.)  Reminded me of the last time I'd encountered the DC Pride parade -- that was back in 2002, when I was a naive intern who just wanted to get to the bus stop that would take me to the Carter Barron amphitheatre so I could see a production of Two Gentleman of Verona; natch the bus stop was on the other side of the parade route. 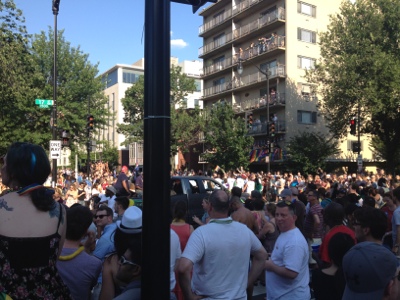 I made my way through the crowd to the shoe store, deposited the shoes for the work-up (mission accomplished!), and then met up with one of my friends who lives in the area for a dinner of enchiladas at Lauriol Plaza (which I had also not been to since 2002).  The food is tasty but nothing special, but I was too hungry to go hunting for some other place. 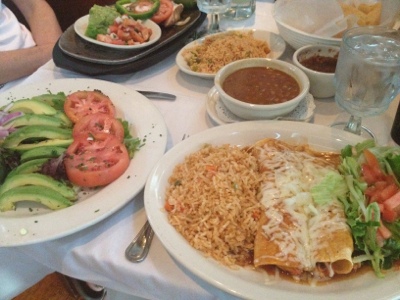 Saw the Girls Scout event on the LOCAL news and knew it had to be just insane there! Glad you survived! Lady