Day at the beach: Assateague Island

Nothing says "summer" quite like a day at the beach.  As we move out of the lovely spring coolness and living in Washington starts to feel like camping inside a dog's mouth, the beach beckons with its breezes, gentle waves, and hours of sun.  That said, the beaches here are all at least three hours away by car, so going to the beach isn't something you just do at the drop of a hat -- there's usually some other planning involved.

This weekend, that "other planning" came in the form of an invitation to join some friends in celebrating the six-month birthday of their new baby.  They proposed a weekend camping trip to the national park on Assateague Island on the Atlantic shore of Maryland.  While sleeping in heat and humidity with a brand new baby, hordes of mosquitoes, and sand everywhere may have its charm for some people, I counter-proposed that Amanda and I would come for the day, to enjoy the beach and a dinner barbecue.

We got to the beach around 11:30am and found it delightfully deserted.

We quickly unfurled our blankets, set up our lawn chairs, and set about the serious business of sunning ourselves.

I had planned to be productive while sitting on the beach.  With the latest issues of Elle Decor, The New Yorker, Details, and Foreign Affairs in my tote, I had a lot to get through!  But such is the lull of sun and waves that I soon gave up and took a nap. 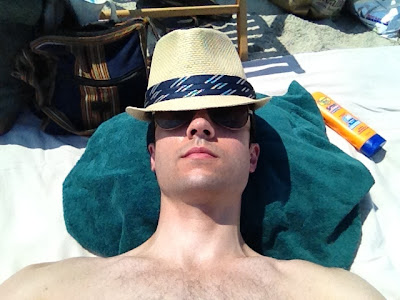 Until a hue and a cry from our neighbors alerted us to the presence of wild horses on the beach.  That's right -- as anyone who read Marguerite Henry's Misty of Chincoteague and Sea Star knows﻿, Assateague Island is home to bands of wild ponies that roam freely on the island.  The origin of these horses is somewhat obscure.  The romantic version is that a Spanish galleon ran aground and the horses swam ashore.  An alternate version claims that property taxes in the early colonies were based on the amount of fenced-in land you owned, so if you could stick your livestock on islands and let the water do the fencing, then you could avoid some taxes.  However they got here, the horses are a fact of life on Assateague Island.  (We were warned, however, not to go near them, and handed very scary pamphlets with images of victims of pony mawlings -- ponies, apparently, are akin to mountain lions in their ferocity.) 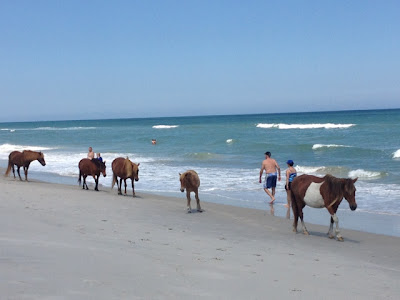 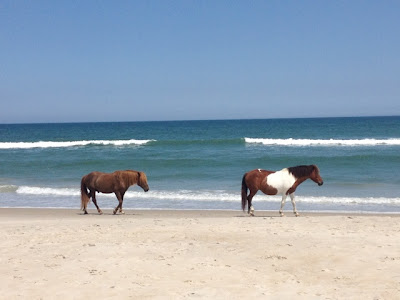 As the sun began to set, we packed our blankets and lawn chairs back to the campsite and set up our barbecue.  ﻿We brought sausages from the German bakery, as well as some jalapeno poppers that Amanda had made the day before (consisting of jalapeno peppers stuffed with cream cheese and wrapped in bacon).  Stacy and Eric (the baby owners) contributed a different type of sausage, zucchini, and corn on the cob.  Amy brought 'smores.  It was all delicious, with the added zest of campfire cooking after a long day outdoors that made it all the better. 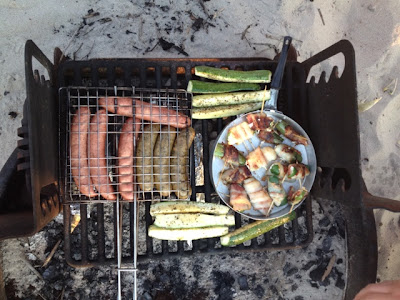 At one point Stacy went out to get some water from the pump.  When she returned she said, "You know how sometimes you go camping and you walk by other people's campsites and think, 'Man, they really have it together! I want to join that party--look how much fun they're having!'?  Well, that's what our campsite looks like."  And she was right.  Despite some minor difficulties with the charcoal briquettes and the overhead tarp (and some anxieties about the baby's first encounter with the wilderness), it was a great little party. 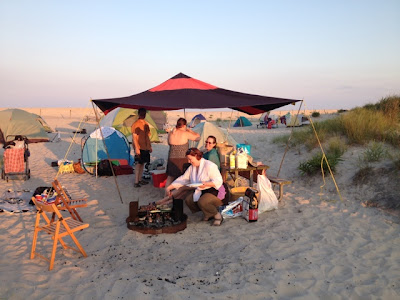 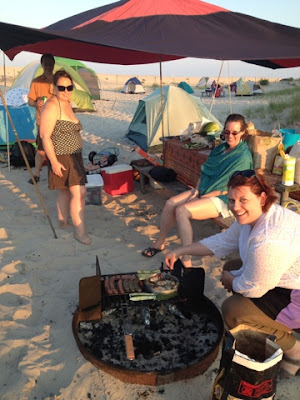 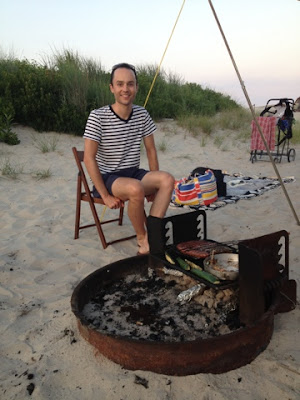 Once we'd polished off our 'smores, Amanda and I bid farewell to the others and headed off into the sunset, back to civilization (aka, air conditioning and hot showers!).