Opera and people-watching and dinner in East London

Had I known how much I would like Kew Gardens, I might have planned to spend most of the day there.  But I hadn't known and had already made plans to see a matinee performance of Madama Butterfly at the English National Opera.  I headed back into town in search of the opera house and some lunch.

Lunch came first in the form of a Five Guys hamburger.  Not the most British of lunches, I admit, but refreshingly familiar with endearingly American traits such as public restrooms and beverages larger than two swallows (seriously, sometimes I wonder if Europeans have a different sense of thirst than me). 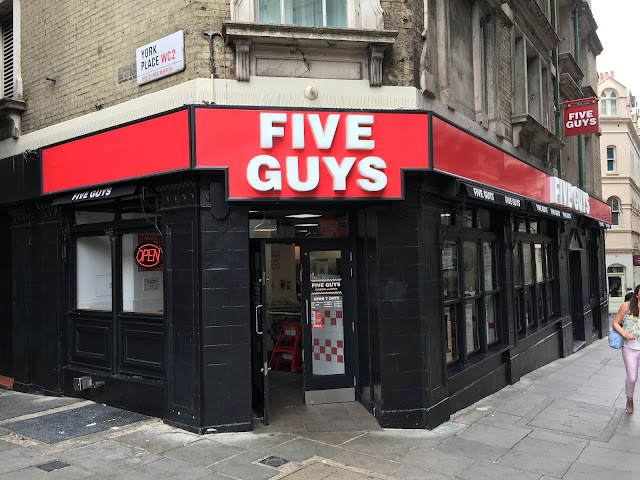 Having fortified myself with a burger, fries and Diet Coke, I set out for the opera house . . . only to realize that I needed a waffle, too.


The English National Opera performs in the London Coliseum, an ornate affair that looks nothing like the Roman Coliseum you might have expected. 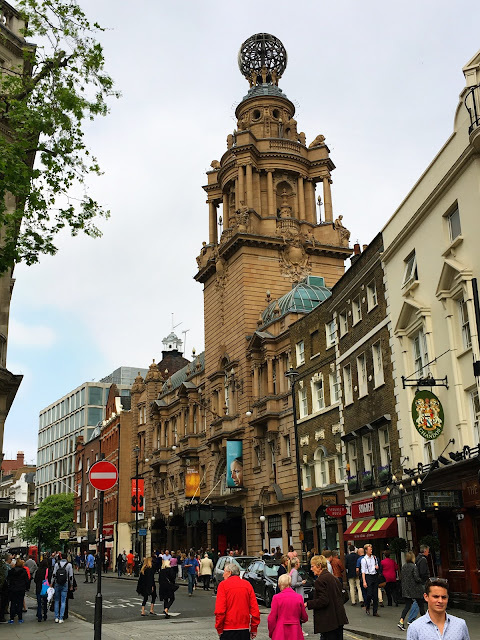 Interestingly, I attended a performance in the Coliseum when I was in London in 2003.  At the time, it was undergoing significant renovations with scaffolding everywhere, so this was the first time I'd seen what it actually looked like.  I remember it being kind of horrible, but this hall was lovely and quite comfortable.  (It probably helped that this time around I was in posh orchestra seats, rather than the extreme nosebleeds...) 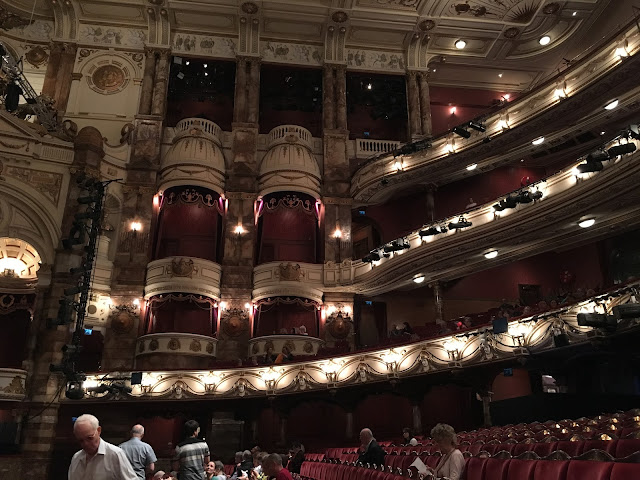 The opera was also a revisitation of prior experience:  The ENO was doing Anthony Minghella's production of Madam Butterfly, which, I hadn't realized, had originated with the ENO, and which I had seen in New York shortly after it debuted in 2005.  I had loved the production at the time and had remembered it as one of the most beautiful theatrical experiences I had ever seen.  I was curious to see it again in its original setting -- would it be as good? 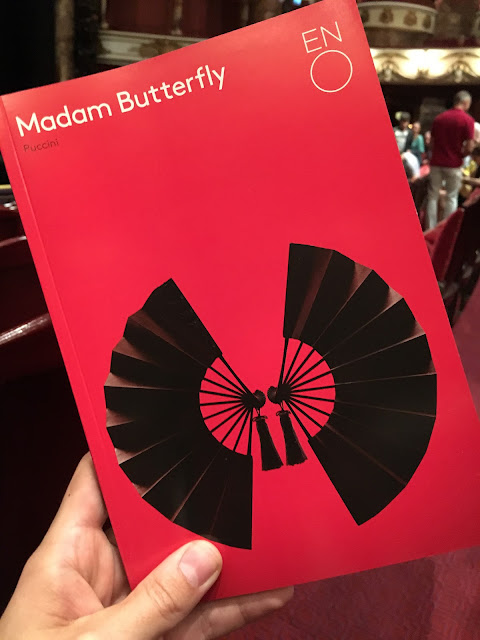 Turns out yes, the production was as good, though the overall performance wasn't, if that makes sense.  The basic appeal of the design, the tragic story, and the heartrending melodies was as effective as ever.  I missed some of the wonder that seeing it for the first time had inspired, but I also noticed some details that I either had missed the first time around or had forgotten.  One reason for this was its being sung in English rather than the original Italian.  Overall I didn't like understanding the words; I've become accustomed to thinking of the voices almost like another instrument -- focus on the melodic line and dramatic quality of the voice, without worrying about what it's saying (there are supertitles for that).  But the English lyrics did make the opera more immediately accessible, with some poignant moments that I hadn't expected -- such as when Butterfly asks early on about the American practice of pinning butterflies to preserve them (foreshadowing her own fate).

The opera ended around 6pm, and I wandered out into the touristy din of Trafalgar Square. 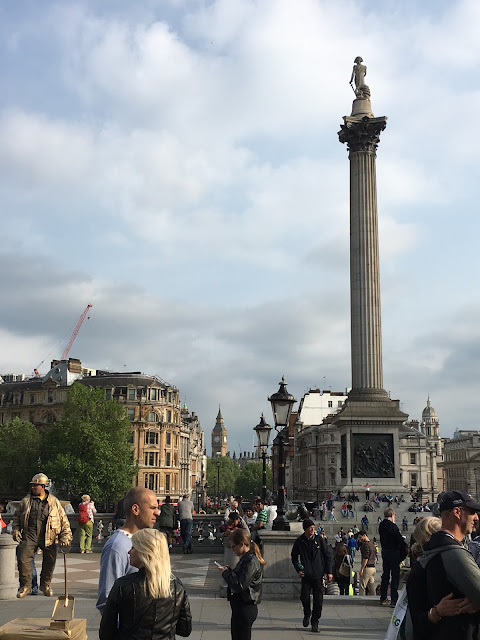 I found a spot and just hung out for a while, soaking up the afternoon sun and the energy of the place.  Although the view included a few iconic London sites . . . 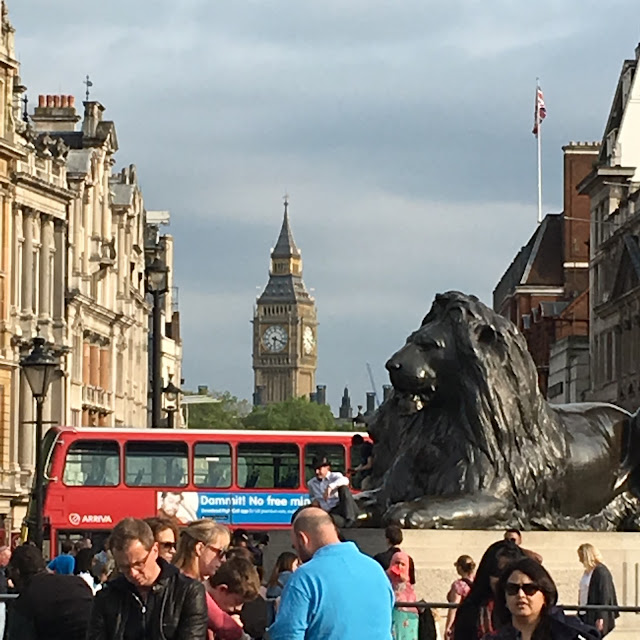 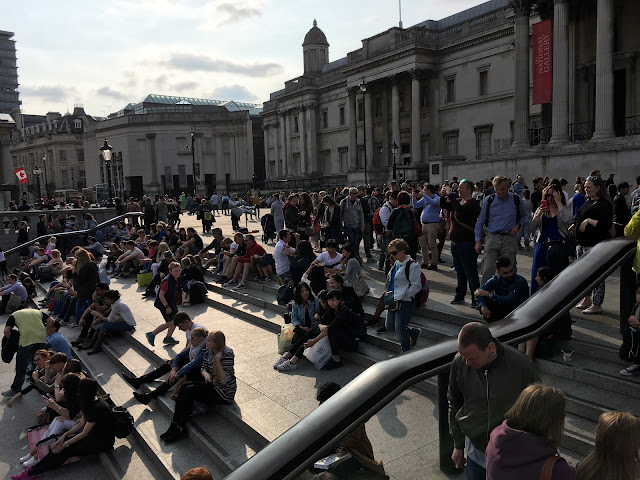 My favorite grouping was the little family sitting just below my perch.  I loved seeing them sitting together, so quietly engaged in their individual pursuits.

After a while my tummy started to growl, so I checked in with Matt and Dorothea to see if they wanted to meet for dinner.  They suggested meeting in East London for a more alternative vibe to what we had seen before.  I made my way to Camden Town stop and stood on the street for about 40 minutes before they joined.  In that time, I saw that the neighborhood was, indeed much different from the tourist-friendly neighborhoods downtown.  This neighborhood was much grittier, with hippies dancing capoeira, drug addicts having medical attacks and/or leering aggressively at passersby, and punks with their leather and piercings and tattoos (sadly, these things all felt very close to home, as so much of Seattle's downtown is filled with similar characters). 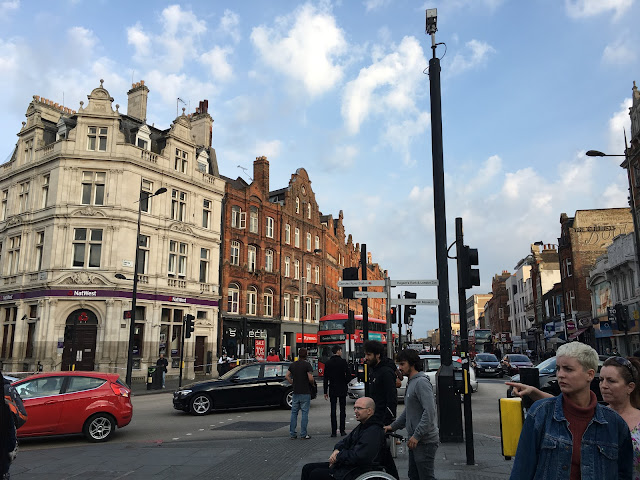 I waited on the sidewalk for a while but felt very conspicuous, being the only person in opera attire in a sea of punks and street people.  I eventually ducked into a Starbucks for a more low-profile way to wait.

Eventually Matt and Dorothea emerged from the subway and we strolled through the neighborhood.  At its heart was a giant warren of former industrial stables that had been converted into bars, nightclubs, food stands, and flea-market style shops.  It would never be my favorite neighborhood, but it had its charm, and I was glad to experience the contrast.

After exploring the stables, we found one of Dorothea's favorite Vegan restaurants and stopped for a dinner of falafel, soup, and coconut smoothies.  It was tasty enough and about as satisfying as Vegan food ever is. 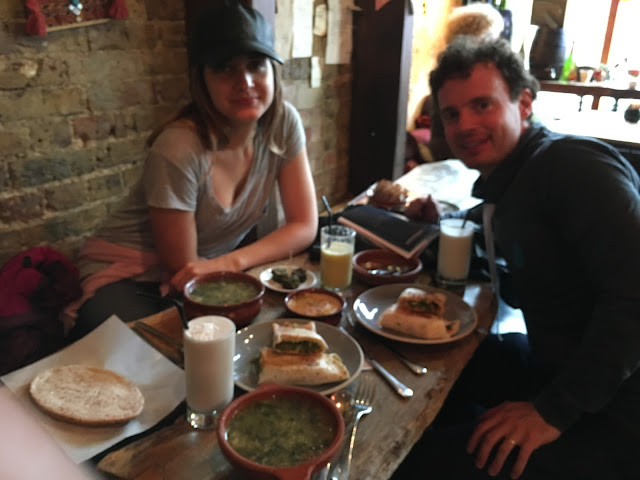 The sun was setting by the time we finished dinner, and Matt proposed that we walk over to Primrose Hill.  In a flat city like London, Primrose Hill was reputed to be the highest prominence in the city.  It was basically a hill in the middle of a park, with hippie drum circles at the top and views of the city.  It was peaceful and pretty and breezy.  We soaked up the atmosphere for a while and then, when Dorothea got cold, walked back down and found a bus back to our neighborhood and bed.
Posted by JJD at 9:52 PM