The past four days have been a blur of all-day business meetings followed by dinners among colleagues and hours of midnight work to catch up on all my normal work that has been displaced by these meetings.  Needless to say, I've seen nothing more of Luxembourg beyond what I saw on the first day.

But the meetings are done now, and my schedule much more flexible!  My plan was to leave last night for Brussels, where I would spend the night eating frites and waffles before continuing on to London via the Chunnel.  Alas, the Belgians had another idea -- when I got to the Luxembourg train station, this is what I found: 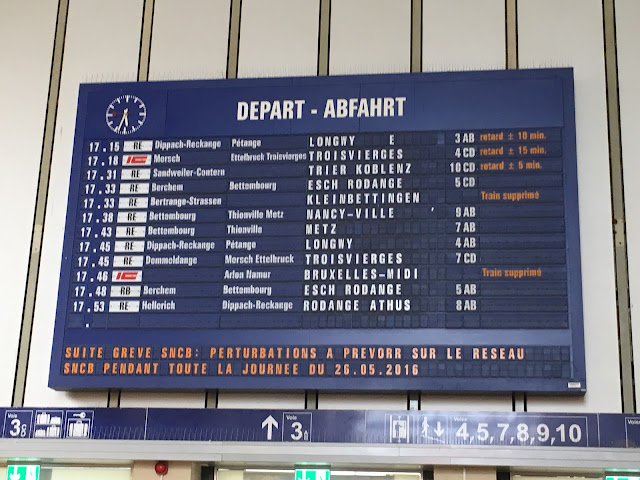 General strike.  All trains to and through Belgium canceled for who knows how long.
I went into travel adventure mode -- surely I could figure this out!  First step was to purchase a pain au chocolat and sparkling water from the train station café -- because when are those things not the first step?
Next step was to test out all my travel options:  Do the train people forsee a same-day resolution to the strike?  No.  What about car rentals?  All cars in all agencies at both the train station and airport had already been booked -- clearly I wasn't the only person trying to get around the strikers.  What about flights?  No flights between Lux and Brux.  Would my taxi driver take me?  Yes, for $500 -- too much.  Horse cart?  None to be found.  Grrr.
But what about London?  The British capitol was my ultimate destination, so even if I couldn't get to Brussels, maybe I could still get to London?  Nope.  By the time I had pivoted to this question, I had already missed the boarding call for the last flight to London.  The earliest I could leave was the next morning first thing.
I finally admitted defeat to the strikers.  I purchased my ticket to London for the following morning and made my way back to the hotel I had left earlier in the day.  Fortunately the hotel still had room, and my colleagues were celebrating a post-conference dinner at a French-Swiss restaurant downtown.  I dropped my bags and joined them for a dinner of melted cheese, charcuterie, and cornichons. 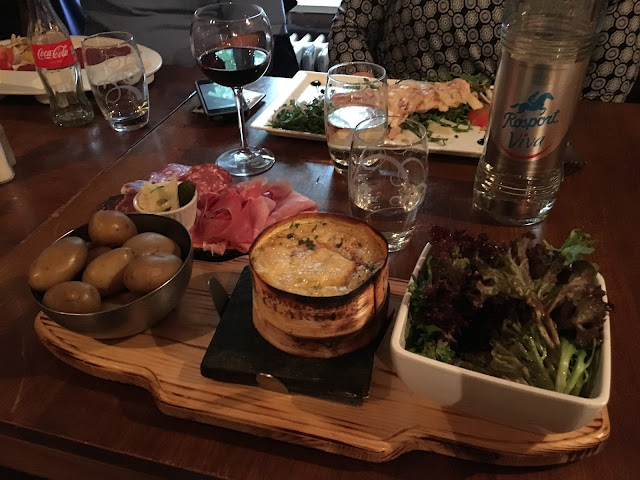 Cheese, cornichons and cured meats have a wonderfully restorative effect on one's spirits, especially when one can at the same time regale the group with tales of my travel misadventures.  Not what I had planned, but a fun night all the same.

Too bad, for sure! At least you ended up with a place to stay and delicious food. Good luck with the rest of the trip!