The House: Of Moss and Men

This weekend's house story is one of me winning against nature -- and by "nature," I mean "the moss that's growing all over my back patio."

The moss itself isn't a problem.  In fact, after seeing moss gardens like this one . . .

. . . in Japan this summer, I actually want to try growing it on purpose.  The challenge is keeping it under control.  The appeal of the Zen garden lies in its juxtaposition of soft amorphous moss against the hard square stones -- too much of either and the effect would be lost.

My back patio is no Zen garden, but it does have moss and stone-colored bricks.  It also had been neglected long enough by the previous owner that the moss was taking over.

Figuring out how to tame the moss had been one of those things that I'd planned to do someday in the medium term -- you know, after more important things like actually moving into the house were taken care of.  But those things are taking FOREVER and I was in desperate need of whatever endorphin it is that's triggered when you cross something off a list of things to do.  Plus, when I told my friend Brad that I had ambitions for the moss, his hesitation over whether Seattle moss could ever be tamed made it feel more like a competition:  Who's going to win, me or the moss?

First step was to plan.  I needed a strategy that would get rid of the unwanted moss on the face of the bricks, but leave all the moss that's growing in the cracks.  Here's what I came up with: 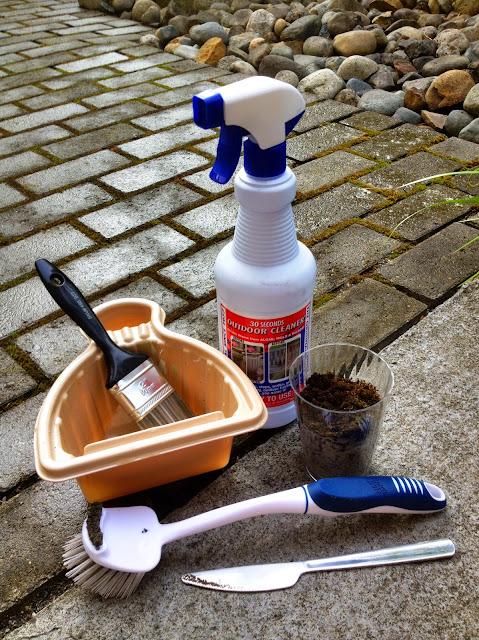 I began with a few things from the kitchen:  a butter knife, a dish scrubber, and a plastic cup.  I used the knife to cut around the edges of the bricks, removing the overgrowth of moss.  I also used the knife to scrape off the moss that was growing on the surface of the bricks, away from the edges.  Whatever didn't come away with the knife got a good scrubbing with the hard bristles on the brush.  Throughout the process I scooped up all the moss shavings into the cup for transplanting into cracks that don't already have moss.

Once I had removed the bulk of the unwanted moss, I went back with a moss-killing cleaning agent that I got from the Home Depot garden center.  Instead of spraying and risk killing the moss in the cracks, I poured the chemical into a little paint tray and then painted it onto the bricks using the cheapest paintbrush I could find.  It was basically an exercise in painting between the lines.

It took me a couple of hours to do the whole patio, and by the end all my joint ached from squatting that long.  But let's be honest, there's something incredibly therapeutic about meticulous manual labor that produces lovely results.  By the end of the evening, my bricks looked amazing: 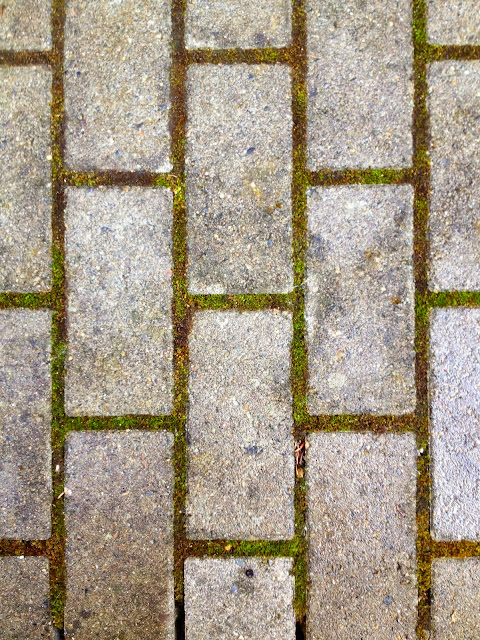 And my patio has lost its dumpy neglected look in favor of a more intentional, groomed look that I love so well. 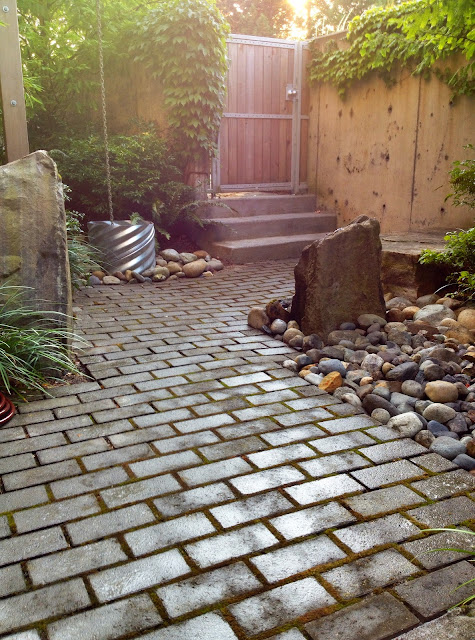 (Now I just hope that by the time it rains the moss-killer will be sufficiently dry that it won't run off into the cracks and kill the stuff that I want to keep.  Fingers crossed!)
Posted by JJD at 12:35 AM

I absolutely love that this takes precedence over getting moved in and settled.

What's the piece or galvanized pipe with the chain?

The galvanized pipe and chain are part of the rainwater collection system. The chain hangs from a water spout and guides the runoff into the pipe, which leads to a large cistern under the house. Water from the cistern (obviously non-potable) is used for the hoses and toilets.