Labor Day weekend on the shore

As you know from my last couple of posts, I spent Labor Day weekend on the East Coast, catching up with DC friends and enjoying a few more days of summer at the beach.

I arrived on Saturday afternoon and met up with a few friends from the firm for dinner and dessert.  On Sunday morning I was lucky enough to have brunch with Jennifer and Mark, who just returned from a long vacation in South Carolina and were willing to skip out on the last half of church to see me.  We talked jobs and baby names and new houses houses and cars -- you'd have thought we were all grown-ups for sure! 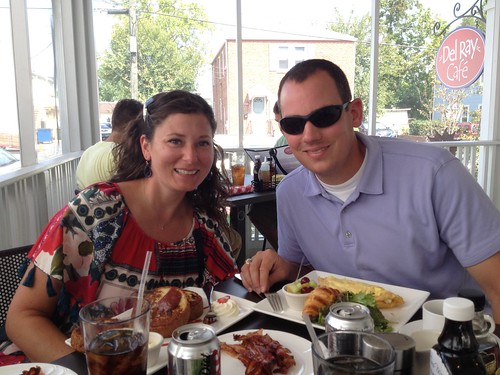 After bidding Jennifer and Mark fond farewell, I hopped in my rental car and drove the three hours to the beach.  (The trip went smoothly, but I don't recommend that anyone run out and buy a Chevy Spark -- I've ridden lawnmowers that had more power than that thing!  It was, however, nicely equipped with hands-free technology that let me call Amanda and then stream French rap music on Spotify as I drove through the bucolic Maryland countryside.)

I got to Assateague Island National Seashore a little after 5pm and quickly found the site where Amy had set up camp.  Assateague has been a summer favorite of mine since 2005, when Amanda and I spent a weekend clam-digging and biking around the island with her Chincoteague relatives.  It's also a favorite of Amy's, and we've spent time there every summer for the past few years, usually around Labor Day because the holiday coincides with her birthday week.  When she told me that she was planning a trip again this year, I decided that my cross-country move wasn't going to get in the way of a good tradition! 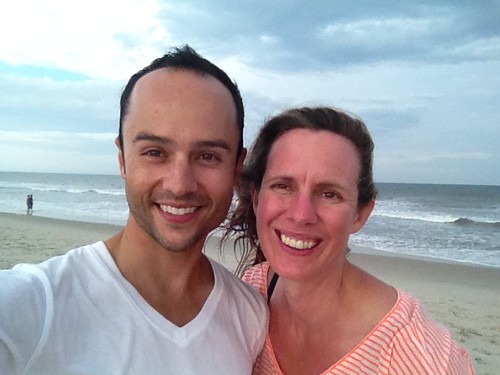 By reserving early, Amy had secured a primo campsite on the lee side of the giant sand dunes thrown up by the waves and wind.  We were out of the mosquito-infested shrubs and well within earshot of the roaring waves. 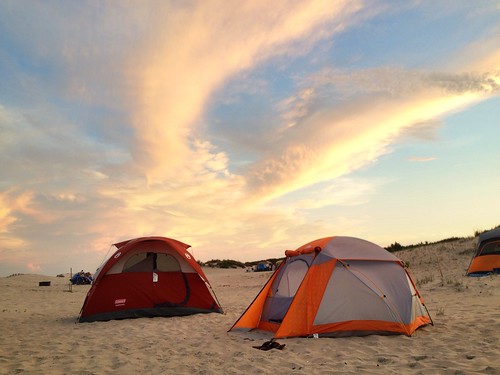 I had brought a tent rented from REI, but Amy saved me the hassle of setting it up by offering me a spot in her little orange tent.  So instead of wrestling with unfamiliar tent-poles, we got right to talking -- so much to catch up on after only 4 months apart!!  (For example, we're both buying real estate and just finished binge-watching the phenomenal Orphan Black.)

I've already written about watching the sunrise in the morning, but I'm not going to let that stop me from going there again.  Here are a few more shots of those glorious moments. 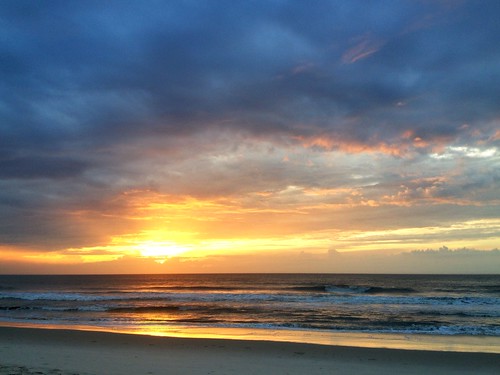 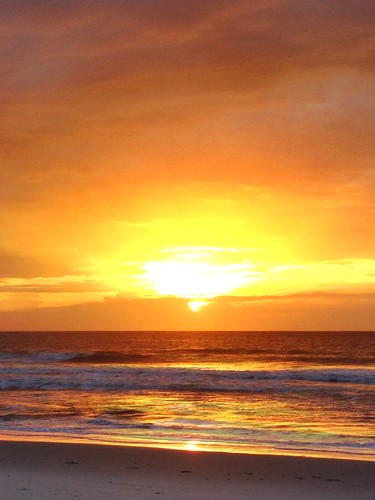 The clouds that made for such a spectacular sunrise brought a morning dousing of rain that cooled things off and chased away many of the faint-hearted vacationers.  We used the rain as an excuse to run a few errands and saw a band of the island's famous wild ponies wandering through the parking lot. 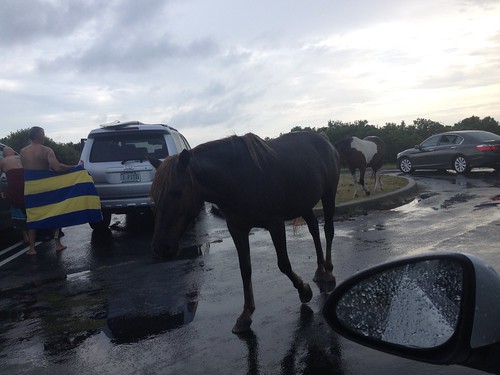 The clouds soon cleared and we settled down on the beach for a long day of doing nothing.  The sun was hot, but the ocean breeze was cool -- and if we got bored reading or sleeping, the water was a refreshing 74 degrees.  As perfect a beach day as they come. 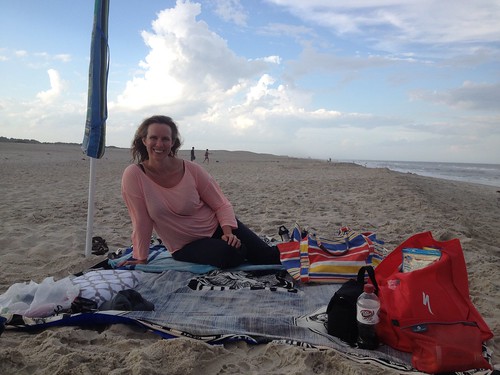 Eventually evening fell and we were treated to a spectacular sunset.  We headed back to camp (all of 50 yards away) and started dinner.  I contributed pita bread with hummus, sliced tomatoes and avocados, and sweet bell peppers.  Amy offered sausage and squash, which we roasted over the fire.  Even by non-camping standards, it was a delicious dinner. 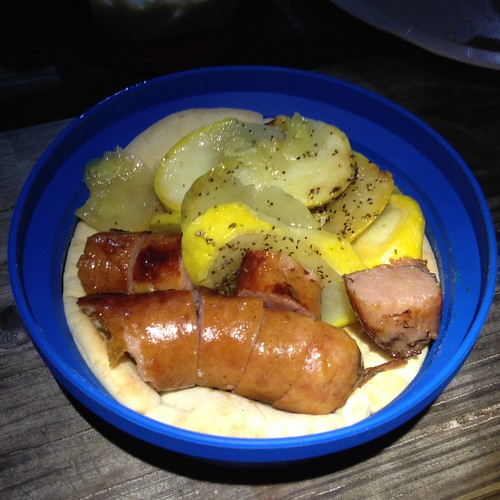 And of course, with nightfall comes the promise of another dawn.  This time the sky was nearly cloudless, giving a totally different effect from the day before -- but no less lovely. 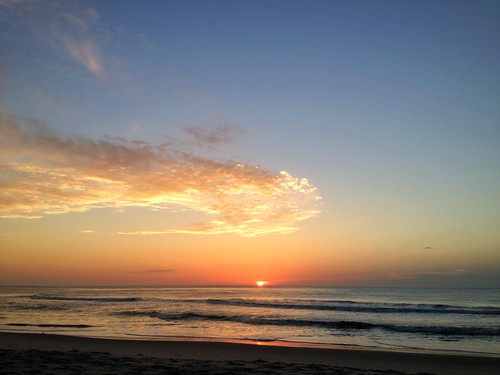 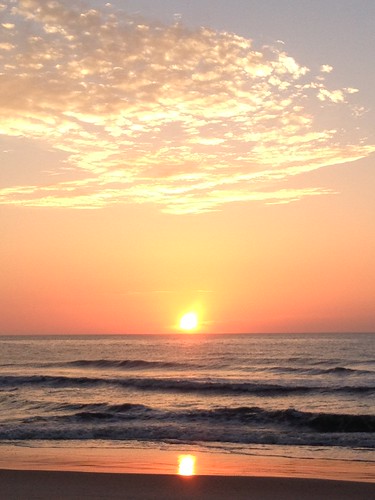 Unfortunately dawn meant Tuesday and the end of my trip.  I was on the latest possible flight back to Seattle, so I was able to take my time before leaving.  After watching the sunrise, Amy and I both went on runs (I accidentally ran about 9 miles!) and then caught a good hour or so at the beach before I needed to pack up and shower and head out.

I guess I could have stayed on the beach a little longer, but I wanted to make sure I had enough time to stop for lunch at Jimmy's Grille.  Because no trip to the beach is complete without a basket of their dinner rolls and a slice of pie! 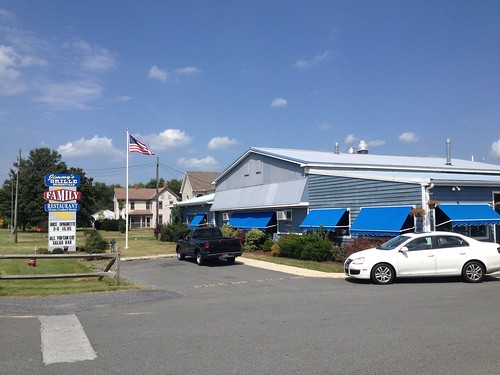 The lunch and the drive and the flight and everything else worked like clockwork on the way home.  I  landed in Seattle without a hitch and made my way home through the chilly driving rain.  Going from the upper 90s in DC to the mid-50s was kind of a shock to the system, but it made the weekend feel all the more like a vacation -- one last hurrah for the summer.

And, happily, I wasn't really sad about the rain and the cold.  Spending time with good friends in places that I know and love had that grounding effect that I've observed before on family trips -- I come away feeling more grounded and confident in myself, and more excited about the future, than I did before.  Besides, I have house-buying to look forward to, and all the visits from friends and family who will come and stay in my yet-to-be-furnished guest bedroom...

I haven't read your blog in a while; I should do it more often! It is so inspiring!

(And now I DEFINITELY need to watch Orphan Black!)