Lunch at the Armory

I've been in Seattle for two whole weeks and I've done basically nothing other than work and unpack and join a Crossfit gym.  So this afternoon, when the weather surprised everyone with warm sunny skies, I decided to go exploring.

My apartment is only a couple of blocks from the Seattle Center, a 74-acre complex originally built for the 1962 World's Fair and now a center for arts, athletics and other entertainment.  It's got the famous Space Needle, several theaters and other performing arts spaces, at least two stadiums, a science center, the monorail, and the Chihuly glass museum.  I'm sure there's even more that I don't know about. 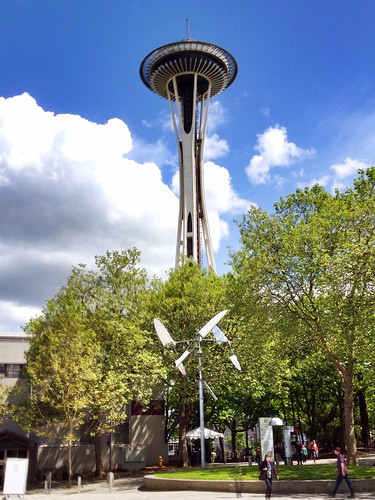 It's kind of a weird place, actually.  Having been built in the early 1960s, much of it was designed to feel very futuristic, only now it just feels very dated in a kind of embarrassing way.  The International Fountain, for example, could use a good facelift from the guys who did the fountains at the Bellagio. 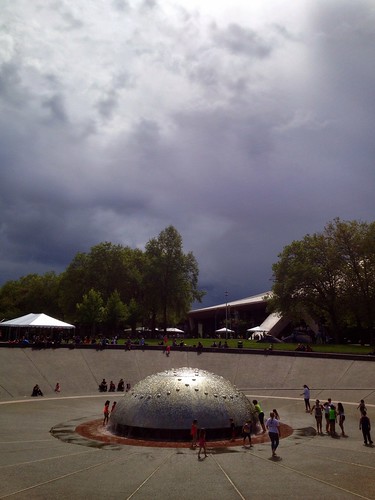 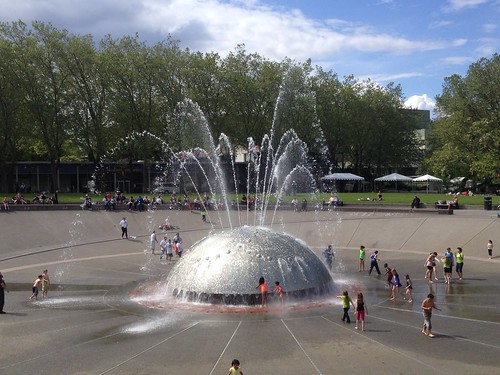 One of the less obvious attractions is the Armory.  Having been built in 1939, it predates the rest of the Seattle Center and was originally used as an actual armory.  Apparently it housed tanks and field artillery back in the day.  For the World's Fair it was turned into a vertical shopping mall.  Today it's used as an exhibition and performance space, and it has a bunch of restaurants around the edges.  I was hungry, so I went in to see what they had.

I took my pie outside and ate it in the sun on a terrace overlooking a great green lawn and the distant International Fountain. 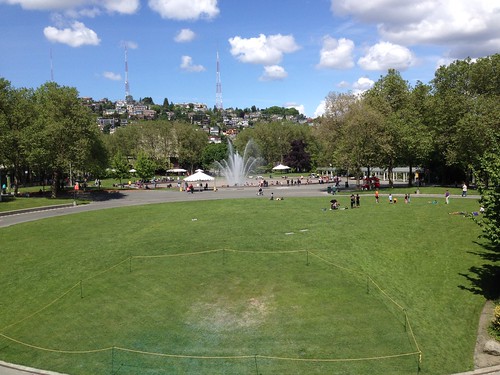 The terrace was a great place for reading and eating and making phone calls -- at least until a rock band set up on one of the neighboring lawns and started playing covers of Journey songs in support of Cystic Fibrosis.  When I couldn't hear myself think, I packed up my things and walked down toward the fountain and discovered that, right below me, under the terrace where I had been sitting, the Seattle Symphony was performing!

Clouds rolled in as I listened to the orchestra, and once the sun was gone the air was too chilly for my shorts and t-shirt.  So I headed home to do laundry and get some blogging done . . . .
Posted by JJD at 10:09 PM

Glad you got to explore. I love exploring. So happy all the streets were not closed off.