So my last post from almost TWO WEEKS AGO left you with a pretty bleak picture:  Yours truly coming home from a crazy new job to an empty apartment, where I had nothing but a sleeping bag and a bicycle to protect me from the bitter elements, and where the lack of Internet and lamps and all things 21st Century forced me to read an actual physical book and then go to bed when it got dark.  It's like I'd time-traveled back to the Middle Ages or the 1970s or something.  And apparently ever since then everyone who hasn't been keeping up with the Kardashians and/or solving the Ukrainian crisis has been sitting with bated breath wondering where the heck I've been.

Sorry about that.  Part of me wants to say I was distracted from blogging when I met a met a bunch of hot vampires and had to fight Dakota Fanning to save their mutant baby, but that would mean I was a character in a Stephanie Meyer novel and would end up getting played by a weirdly unattractive B-list actor in a Kristin Stewart movie -- and we can't have that.  So instead I'll just give the plain old truth.

First thing that happened was the movers came on schedule after all.  After phoning on Monday night to tell me that they wouldn't be coming on Tuesday morning, I got a call on Tuesday morning (right as I was leaving for work) saying that they were on their way after all and was I still available for delivery?  Apparently they had lost the paperwork for my shipment (hence the original cancellation) and had only just discovered that all of my things were on the verge of getting shipped to Kansas or someplace totally inappropriate.  In the nick of time some inspired soul discovered all the paperwork stuffed inside one of the crates that held my things and was able to get things back on track.  Not wanting to risk any more such shenanigans, I told them that I was still available for delivery (and then called my boss to say that I wouldn't be coming in that day after all).

So the movers came and unloaded everything in a more or less orderly manner; I seized the moment and called Comcast so that they could send a guy to hook up the Internet.  Between the newly unpacked bed and having in-home access to WiFi, I felt like I had finally returned to civilization.

This is the second weekend since then, and I think I'm as moved in as I'm going to be.  I'm hoping to move again in the next few months, assuming I can find someplace to buy, so I left a lot of my things packed in a storage closet down stairs.  It feels homey enough to be comfortable and functional, but also lighter and more pared down than if I'd unpacked everything.  Makes me appreciate just how much stuff I have, and just how little it actually contributes to the quality of my daily life.  Perhaps I'll end up getting rid of most of it permanently when the time comes to move again.

The size of the rooms and the angles make it tough to get good photos, but here are a few shots to give you a sense of what it looks like now that I'm settled in: 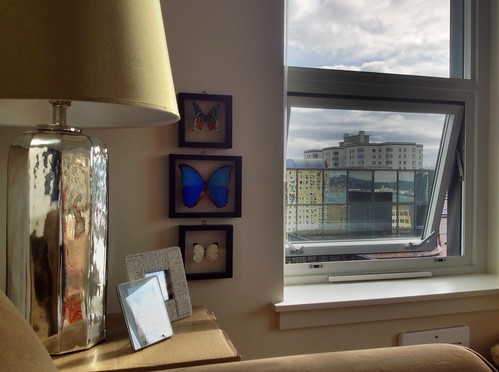 One of the things I am absolutely loving about Seattle is the abundance of fresh flowers.  I realize it's kind of Edith Wharton of me, but I think fresh flowers are a must.  If I could afford it, I would have a bunch in every room.

SO much nicer now you have your things! Lady