I've never been to Russia, but I imagine their winters being freezing cold and dark all the time.  Kind of like how it's been here lately.  So maybe the dancers from the Mariinsky Ballet will feel right at home this week as they perform Swan Lake at the Kennedy Center. 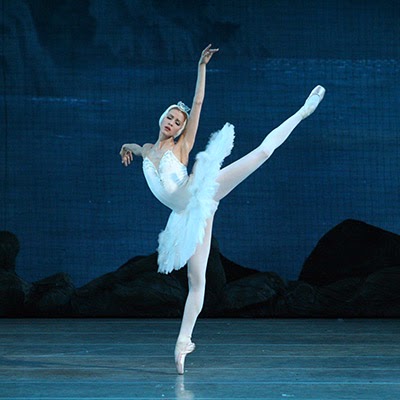 Amy and I had tickets to see the performance last night, and it really was wonderful.  When it comes to ballet, it's hard to beat Russian dancers performing a Russian ballet.

In case you're not familiar with the story, it goes something like this:  A young prince is being pressured to marry, so he escapes into the woods to go hunting.  There he meets a beautiful princess who has been imprisoned by a sorcerer and turned into a swan.  She takes human form at night, which is when they meet, and of course they fall in love right away.  The lovelorn prince returns to the palace but is distracted from his love when the sorcerer shows up with his own daughter, who dances beguilingly for the prince and lures him to her.  The swan princess sees this and flies against the palace window -- the prince realizes he's been tricked and runs out to the lake to reunite with the princess.  There's a fight with the sorcerer and . . . well, then it depends on which version you're seeing.

If you see the original version, the sorcerer wins the fight, the swan dies, and the prince commits suicide.  (Remember, these are Russians at the height of the Romantic era -- of course everyone dies!)  But if you see the version from the 1950s, then the prince wins the fight, the swan turns out not to be dead after all, and they live happily ever after.  (I guess when you've survived two world wars, you get tired of seeing the swan die.)

Last night's production used the modified 1950s choreography, so everything ended happily.  It was the first time I'd seen the happy ending, and although it was nice, I prefer the dramatic oomph of the original tragedy.

Regardless what you think of the ending, the dancing was incredible.  The corps was incredible strong, with tight formations and crisp, clean lines.  All those swans flitting about the stage in perfect synchronicity was like a living kaleidoscope.  The prince was good and had the delicious legs that all princes should have, but the sorcerer stole the thunder when it came to leaps -- oh man, he was good.

And then there was the prima ballerina.  She dances both the swan and the sorcerer's daughter, so she's got to go from being a sweet, vulnerable, fragile princess to a dark, sensual, aggressively alluring bird of prey.  The woman who danced last night pulled both aspects of the performance off perfectly.  It's always amazing to me to focus on the prima ballerina.  However good the other soloists may be, she always stands out.  There's something about her style and the lyricism of her movement that the others just don't have (or at least aren't showing).  The control she had over every movement of her body was astonishing; nothing happened if she didn't want it to happen just that way.

Anyway, it was a lovely performance and an even better way to start a week of vacation.
Posted by JJD at 11:23 PM