After an incredibly work-heavy fall, and a December spent almost entirely in New York conference rooms or working around the clock at my kitchen table, I resolved to make a change in January:  I would meet new people, try new things, and make an effort to have a life outside of work even on weeknights (gasp!).  So when a friend of mine asked if I'd be interested in going to a figure drawing class on Wednesday after work, I said yes without hesitation.  Never mind that I know nothing about figure drawing and haven't sketched anything more complicated than my hand since middle school -- I figured if I could handle a ballet class and a design class, I could definitely do drawing.

The class was held in the attic of neo-gothic church in DC -- and oh, what a perfect little attic it was! At the top of a winding staircase, the landing opened into a set of wonderfully bohemian rooms filled with books and artwork and tattered furniture.  The only thing missing was Mimi dying of tuberculosis in the corner.

One of the rooms was set aside for drawing:  Chairs lined the walls and in the center lay a white sheet and a draped bench.  We were instructed to hurry inside and secure a seat before they were all taken. As we settled in, the model arrived and, with very little ado, dropped her kimono and struck a pose! And so, without any warning, I had thirty seconds to capture the image . . . 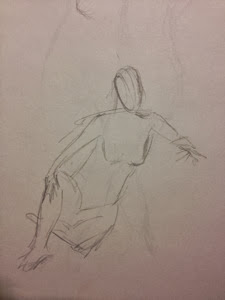 then another thirty seconds to capture the next . . . 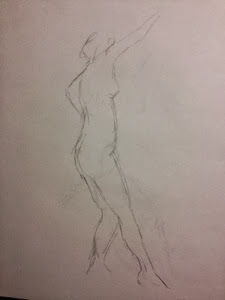 it was all going so fast and it was all I could do to keep up!  I had to start strategizing -- find an anchoring line and work outwards from there; instead of focusing on anatomy, notice the geometry and proportions and turn it into a foot later; don't get too bogged down in making any one thing too perfect.


Then, thankfully, the poses started to lengthen. I had more time to gather my wits and produce something vaguely humanoid. 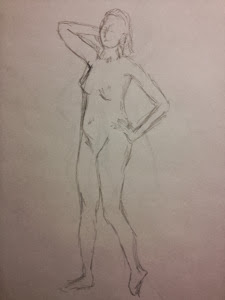 But no rest for the wicked, right? Just as I felt like I was starting to get the hang of it, the model
busted out this pose.  Seriously.

But after that we got into much longer poses -- fifteen twenty minutes without interruption. Probably the longest I've stared with such concentration at another person.


Between the longer poses we'd break for a few minutes to let the model rest.  During those breaks, Joe and I compared our sketches and chatted with the people next to us.  Some were very good; others more middling; a few were able to capture certain things beautifully (say, the turn of a foot) while failing to get other things quite right.  I also realized that some people were drawing things that had never occurred to me to draw -- for example, I fixated on line and shape; others were clearly more interested in shadows and light or capturing the nuances of face.  I admired most the drawings that were bold and a little bit wild in their effect -- they seemed to capture both the stillness of the model and the movement of the drawing hand.

Most of the more experienced artists were using some sort of fancy crayon or pastel that allowed them to shade easily and capture nuances that were beyond what I could do with my super-fine mechanical pencil.  Joe had this great terra-cotta-colored crayon that reminded me of sketches I'd seen in museums.  For the last pose, he offered me a piece and I gave it a go. 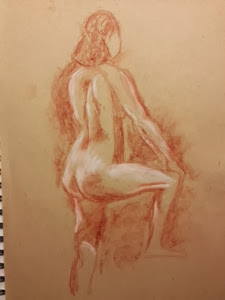 By the time the model broke this last pose, we'd been in the room for over two hours -- only it felt so much shorter!  I found drawing a live person in a short period of time to be an incredibly focusing, almost meditative exercise -- less physical than yoga but similar in its ability to drive out all other thoughts.  And the hushed energy of the room -- full of similarly focused people -- reminded of the great reading rooms of the New York Public Library where everyone sits so silently intent on their pursuit of knowledge or art or escape from whatever.

But two hours of sitting after a long day of work without much of a supper is about enough, artsy-library vibe or not.  So when the model began setting up for another pose, we ducked out and headed back into the night.  What a fantastic way to round out the day!

Email ThisBlogThis!Share to TwitterShare to FacebookShare to Pinterest
Labels: Art

What an experience! And, you actually draw very well. Some of the sketches are amazing considering your time and experience. Perhaps you should sketch more while on your world travels. Lady

I'm glad Mimi wasn't dying in the corner while the model was showing everyone her, uh, stuff.