As everyone who has access to any form of weather-reporting media outlet knows, Washington has been struck by the dreaded zombie apocalypse polar vortex.  Or, I should say, the POLAR VORTEX!!  Because this is way serious.  I mean, never mind the fact that it has been negative a million degrees and snowy in Chicago for months -- the important thing is that it got all the way down to 12 degrees Fahrenheit for approximately two days here in the Nation's Capital.  It was enough to shut down the schools and cause a run on the frozen pizza aisle at the grocery store.

It also nearly froze my fish.  (See, I told you this was serious.)

I got home from my Bikram yoga class last Saturday morning, rejoicing in the contrast between the 19-degree weather outside and the nearly unbearable 105-degree temperatures of the yoga studio, and discovered that my barrel had frozen into what appeared to be a solid ice cube.  Which wouldn't normally be a problem, except that, in my work-addled state, I had not followed the forecast as assiduously as I might have done, and so I had failed to pull out my fish before the formation of said ice cube. 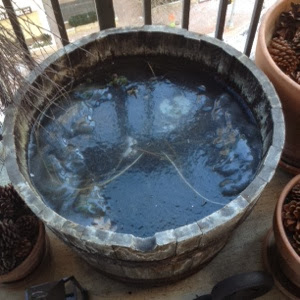 But as I always say, when life hands you frozen goldfish, do a science experiment.  I mean, tell me you've never wondered whether you can really freeze a goldfish and have it come back to life!  So I set up a polar drilling rig (consisting of a pot of boiling water) on the surface of the ice and started working through the layers to reach the bottom, where I was sure the fish were trapped. 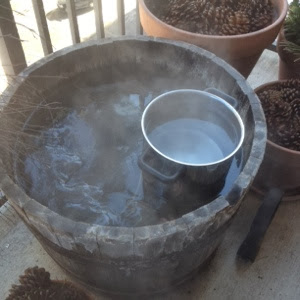 It was slow work, but effective.  And when I was on my third pot of boiling water, the ice was thin and clear enough that I could see that (a) it hadn't frozen all the way through, and (b) at least one fish was still swimming around beneath the ice.  IT WAS A POLAR VORTEX MIRACLE!

I redoubled my efforts to break through the ice and rescue the fish, feeling all the while like a (much lesser version of) the people who got to rescue those Chilean miners a few of years ago.  By the time I'd melted through the ice, I grabbed my net and tried to fish the little friend out.  Only apparently he didn't realize that he was about to become a national media sensation by being rescued from such certain death, and so he swam away.  Undaunted, I tossed the net away and dove in headfirst to swim after it plunged my right arm into the freezing water and caught the fish with my bare hands.  It was exhilarating and horrible all at the same time -- exhilarating because catching a fish with one's bare hands is kind of badass (especially if you omit the fact that it was a goldfish swimming, in its near-frozen state, about as quickly as a snail), and horrible because holy cow that water was cold!  (I've always known that I'd never survive a cold-water natural disaster, and this just reinforced that.)

Having thus risked life and limb for my 25-cent goldfish, I happily plunked it into a vase and stuck it in the fridge to wait out the storm, just like last year. 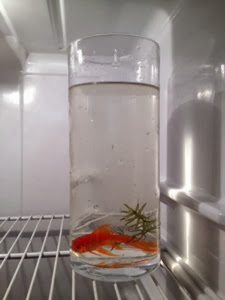 Now I just need to figure out what happened to the other two goldfish.  They may have been sitting on the bottom of the barrel, under the water lily pot, where I couldn't see them.  Or perhaps they've followed the path of their Elijah-fish forebear and have been taken up into heaven.  If the ice doesn't melt soon, we may never know the answer to this mystery!

LOL! Do you always say that bit about frozen goldfish? Really? (Well done on the rescue, though!)

Congrats on THE ONE rescue! Perhaps the other two are Lazarus fish?? Lady
P.S. Next time, remember to wear a survival suit while making such a plunge.