Night at the opera

Last fall, the Washington National Opera announced that it would be opening its 2013-14 season with a production of Tristan und Isolde, with Deborah Voigt (a major opera star and one of the leading Wagnerian sopranoes) singing Isolde.  I marked my calendar for the day that tickets went on sale, called all my opera-going friends, and figuratively camped out to buy tickets (I kid you not -- the tickets went on sale at 10am; I was on the website at 10am).  It's rare that the WNO pulls in talent like Deborah Voigt (I've only seen her at the Met Opera in New York), and I wanted to be part of it.

Which is how I ended up with tickets to a 4.5-hour opera on Friday, at the end of a crazy-busy week of work (with too much still to do), on the eve of a 100-mile bike ride for which I was completely unprepared.  Oh, the things I do for a good opera star.

Only the opera star wasn't there!  DV withdrew from the production a few weeks ago under mysterious (to me) circumstances, and so the role was sung by some random British soprano.  It was super disappointing -- as in, I probably wouldn't have bought tickets if I'd known DV wouldn't be singing (and certainly not at the price level I did).

Oh well.  Such is life.  At least I could be confident that it wouldn't be worse than the production of Tristan I'd seen ten years ago in London, which was horrible and dark, full of stomping and stout women in combat boots and apparently unwashed hair.

In fact, I enjoyed it very much.  Since that first time in London, I've seen a lot more opera, especially Wagner, and read all of the original legends surrounding Tristan and Isolde (they're roughly the same vintage as the King Arthur legends, with a number of different variations having been handed down through the centuries).  So I went into it better prepared to appreciate it.

Instead of darkness and stomping, all was light and airy, with the action taking place on a clear glass platform suspended over a black pool of reflective water, framed on all sides by billowing white sheets.  It was a clean and elegant look.  True, the women were still stout (heck, everyone was stout), but there was nary a combat boot or stringy lock of hair to be found. 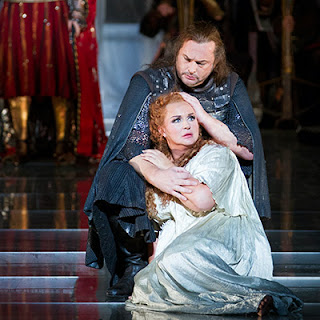 And the singing was perfectly fine.  No, it was not at the same level as we would have had with DV or the other major stars, but still, everyone did a fine job.  Wagner's music is powerful and full of magic.  I would not describe it as generally accessible, but it you pay attention to what he's doing, it's incredible and deeply moving.  Also, to watch these singers perform for nearly five hours with almost no breaks other than the intermissions (of which there were two), was to witness a remarkable feat of endurance.

For me, the highlight comes at the very end of the opera, when Tristan has died and Isolde, too, succumbs to the power of her yearing to be with the man she loves.  She sings an aria that is so tender and beautiful -- and if you listen to the orchestra, you hear it build and build in tension until you can hardly bear it, and then IT NEVER RESOLVES because, apparently, that sort of passionate longing can't be resolved or fulfilled; it just subsides and lets her pass to the other side to rejoin him.

There are a bunch of videos of this Liebestod ("love death") on YouTube, but for some reason none of them permit embedding.  So here's a link to a video of Waltraud Meier singing the Liebestod.
Posted by JJD at 11:49 PM

So that's where this music comes from. Beautiful! So glad it wasn't an utter disappointment. Lady