So here I am, Thursday morning, sitting in my dentist's waiting room, reading Les Miserables until they call my name, when -- suddenly -- I turn the page and discover . . . 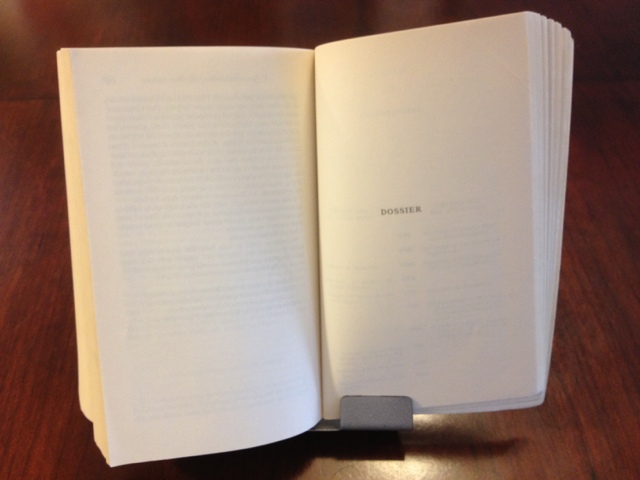 there were no more words!  Nothing but snowy white blank pages until the editor's notes began.  After 1800 pages and six months of my life, Victor Hugo finally had nothing else to say.  (Or, at least, he had left off here to seek other platforms.)

You'll recall that I started reading this book (this time around) with more than a little ambivalence.  You may therefore wonder whether that ambivalence changed now that I've finished the novel.  The answer, sadly, is no.

The basic premise of the novel is, admittedly, epic.  The relationship between the forces of mercy, repentance and sacrifice (Jean Valjean) and those of justice, truth and the law (Javert) is profound and problematic in the abstract, and moving and revelatory when applied to concrete examples of the poor and excluded in society.  The chapters devoted to the moral quandaries of Jean Valjean are some of the best and most compelling in the book.

In addition, Hugo also may be one of the most eloquent and finely observant writer's I've read.  Here are two of my favorite passages:

But the problem with Hugo's eloquence is that it knows no bounds.  Literally.  The rigorous discipline so evident in the crafting of his fine sentences was not applied to the novel as a whole.  Instead of focusing on his primary characters and plot -- and on developing his themes through them -- Hugo runs on and on and on, with lengthy tangents and tirades that do nothing to advance the plot or develop his themes, with detailed descriptions of characters who are never seen again.  I didn't do the math, but I'd hazard a guess that a good third of the book could easily be cut without any detrimental effect to the integrity of the whole.  When, on page 1769, I read (for the upteenth time) the words "Ici une courte digression est nécessaire" I knew that it would be neither short nor necessary.  Whatever indulgence I may have granted earlier such "digressions" had long been supplanted by a dull, impatient rage:  I skipped whatever "necessary" babble Hugo offered and picked up when he got back to the point.

Finally, aside from Jean Valjean, Javert, the Bishop, Thenardier and Gavroche, I kind of hate all of the characters in the novel.  They feel like cartoons.  Cosette is vapid and empty; Marius is a dreamer who needs to grow up -- it's hard to feel confident that either of them could succeed in the world without Jean Valjean to protect them.  This may be a symptom of 19th Century Romanticism more generally (as opposed to a failing unique to Hugo), but in a novel as annoying and voluminous as this one, my ability to care about the characters ended long before the book did.

Email ThisBlogThis!Share to TwitterShare to FacebookShare to Pinterest
Labels: Books