Best dance concert of the season

Monica Bill Barnes & Company performed last night at the Kennedy Center.  It was, hands down, the most fun I've had at a dance performance all year.

The choreography was fresh and full of humor and contagious enthusiasm.  The dancers exuded personality and, by the end of the show, I wanted to be best friends with all of them.

It helped, of course, that I'd actually met two of the dancers and learned some of the choreography earlier this week.  On Tuesday night Christina and Giulia taught a Master Class for luddites like moi, inviting us to step inside Monica's world.

It's a fun and physical and risky world.  There were typical dance moves, of course (ball change!), but also lots of purely theatrical physicality.  For example, we'd be given a scenario with general directions but the details would be left up to us.  So, say you're in middle school and you see your friends across the room, and you go to them, but you trip on the way -- what do you do?  Or, say you show up at a party and don't see anyone you recognize; you wait a minute, then start grooving to the music on your own, only to realize that it's actually someone else's funeral and not your party at all -- how do you react?

One aspect that I really loved was how positive and collaborative the experience was.  The scenarios often required a partner in a supporting role -- and by "supporting" I mean literally encouraging and motivating.  So one of you, say, would be a contestant in a shaking contest, and the other one would be cheering you on, absolutely convinced that you were going to win.  Or one of you would be trying to get up the nerve to flirt with someone at a bar, and the other one would be encouraging you and acting as your wingman.  Having another person there whose sole job was to encourage and support you made it easy to drop the inhibitions of performing in front of strangers, and, weirdly, it made you like the person better (because it's hard to fake being a fan of someone 100% without actually becoming a fan on some level) and it made you feel better about yourself (because how could you not when someone is right there cheering hysterically about what an incredibly awesome shaker you are?) .

None of that made the dancing any easier to perform -- I'm still a complete disaster when it comes to spinning around (spotting is so hard!); there's no way I'll be quitting my day job to join a modern dance company.  But still, it was a great intro into the world of modern dance and a wonderful contrast to the very different discipline of ballet.

And, of course, as I watched the performance last night, it was super exciting to see the scenarios play out and the familiar choreography come together -- "Look Amy, I know how to do that! ... So that's what it was supposed to look like." 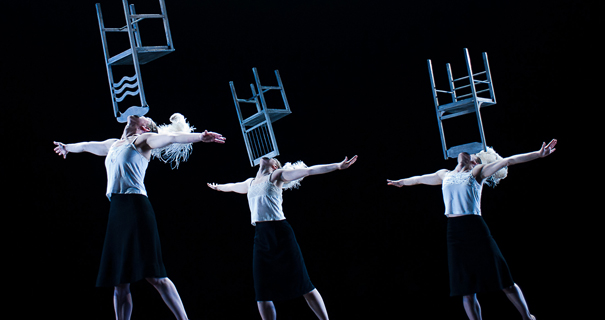