Chicago - The Joffrey does Othello

The Chicago cultural scene has more than just fantastic architecture.  It's also got one of the leading American ballet companies, the Joffrey Ballet, and we were thrilled to discover that our trip fell during their run of Othello. 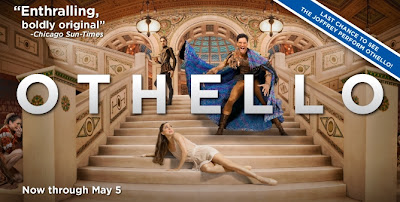 We got to the theatre early and settled into our seats . . .
admired the cavernous concert hall . . .


and enjoyed the show, which was based on the same tale of jealousy and murder as that on which Shakespeare based his tragedy.  Lar Lubovitch (about whom I've written before) did the choreography, so it was very modern and full of gorgeous and unusual lifts.  Here's a preview video:

The first act showed Othello's marriage to Desdemona and, frankly, was kind of boring.  Like Shakespeare, I probably would have cut it -- after all, a happy newlywed couple can only hold your interest for so long when you know it's all going to fall apart in the next act.  Act Two, when it finally came, was amazing.  The men dancing Othello and Iago were both fine dancers, and Lubovitch had some wonderful passages that explored the power dynamic between them.  The act ended with one of the most alarming ballet fight scenes I've seen (those drums!).  The narrative in Act Three felt weaker again and dragged a bit when we got stuck with Desdemona dancing around her boudoir with a crucifix.  But then it picked up again when Othello showed up and murdered her at the end of a breathtakingly beautiful pas de deux.  Rachel complained the pas de deux was too loving to plausibly end in a murder, but I decided I didn't care and just soaked up the beauty of the dance.
Posted by JJD at 11:50 PM

Wow! Even the preview was amazing! Lady