Start of the Season!

Summer is over and the theatre season has begun!  It officially started for me tonight with the Shakespeare Theatre Company’s brand-new production of The Heir Apparent -- David Ives’ new translation of Jean-François Regnard’s 1708 comedy Le Légataire Universel.  It's the first play in the STC's 25th Anniversary season. 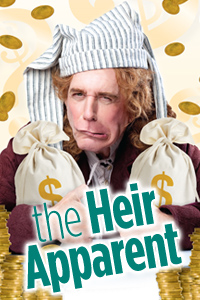 Translation?  Well, not exactly.  I think the preferred term is “transladaptation.”  Essentially, Ives translates from the French and, in the process, updates the language and the humor so that it registers for a modern audience in much the same way that it would have registered with the original audience.  The classic French comedic core remains:  you’ve got the French take on Commedia del Arte character types (aspiring bourgeois, noble but penniless young lovers, wily servants); the convoluted, improbable plots with surprise twists (he’s dead! he’s not dead!); the strong physical comedy; and, of course, the quick wit, clever word-play, and sparkling rhymes.  That’s right  -- Ives dropped the Alexandrine verse (switching to iambic pentameter, instead) but he kept the rhymes!  And, unlike most rhyming plays in English (which I tend to hate), the rhymes and the word-play really drive the play’s energy and wit, making it enormously fun for the word-lovers among us -- and just plain funny, too.

The transladaptation was commissioned by the Shakespeare Theatre as part of the ReDiscovery Series, a program designed to recover from the dustbin of history plays that never should have fallen in there in the first place.  Which, frankly, I think is a brilliant program (it’s certainly something that I would give money to support) -- and as far as I’m concerned it’s been a tremendous success so far.  This is actually the second play that David Ives has helped to rediscover.  The first one he did, The Liar (from Corneille’s Le Menteur) débuted last year to great critical acclaim and was the best, funniest play I’d seen for years -- at least since I saw Boeing Boeing on Broadway in 2008 (another French comedy, natch).  More about Ives and The Liar available here.  (Interestingly, I told Amanda about The Liar this summer, and now there’s a production in Denver.)
In honor to the play’s French roots (as if I actually needed an excuse) and to put myself into the proper mood, I managed to get out of work early to spend a couple of hours at Paul (who finally had the decency to hire an actual French person), enjoying a croq monsieur and immersed in Suite Française, Irène Némirovsky’s remarkable account of life in France during WWII (I'm in the middle of the the pre-bombing scramble to get out out of Paris).
* * *

For more about the plays, here's director Michael Kahn: