This weekend I had the great pleasure of welcoming mon père to Washington, DC.  He had spent the past week up in Aberdeen, Maryland, attending a series of lectures and courses about biological and chemical agents that can be weaponized (he's a civilian public health official at an Air Force base out West, with particular responsibility for emergency response).  The courses finished late on Friday and he was able to postpone the flight home until Sunday morning -- which meant he had enough time to drop down to DC for a visit.

He arrived at my place around 10:30am (at which point I was at the grocery store trying to find things to feed him for breakfast) and we had a great conversation about the things he had learned and seen during the past week, all of which made me want to see the new movie Contagion and avoid experiencing any of that in real life.  He also gave me some dating/relationship/marriage advice that he'd recently given to Mark, part of which consisted of the maxim:  Always have a plan.  More specifically, whenever it comes time to make a decision on what to do with the other person, I should always have a plan for how I want it to come out.  That way, when the other person says, "I don't know, what do you want to do?" I can avoid responding with the unhelpful, "I don't know, what do you want to do?"

It's good advice.  What mon père may not have known (although he can't have been surprised), is that I had figured that out on my own a long time ago.  And this weekend was no exception.  I'd asked him on Friday whether there was anything he wanted to do while he was here.  He said there were a few things he'd like to see in this life:  the Eiffel Tower, the Statue of Liberty, and the Washington Monument.  Alas, the Washington Monument is closed due to earthquake damage.  Which meant that it was my job to come up with an alternate plan.

The plan needed to accomplish three things:  (1) Be interesting and fun for both of us, (2) provide opportunities for talking, and (3) give mon père a glimpse of my life here.  Oh, and it also needed to fit into fewer than 24 hours.  Here's what I came up with:

Lunch at Heidelberg Bakery.  I gave mon père a choice of four restaurants:  Vietnamese, Thai, Mexican and German.  We went with the German bakery that grills wursts on the front lawn every Saturday.

Afternoon, Part I: Smithsonian Air and Space Museum - Udvar-Hazy Center.  A few years ago the Smithsonian opened a new branch of its famous Air and Space Museum in a hangar out near Dulles Airport.  It's where they get to showcase the really big stuff.  I'd been meaning to go out there for a while, and I figured that mon père would be just the person to see it with.  Turns out, I was right.  After a lifetime of not living up to this society's (or the church's) expectations of what a proper boy should be, I'd stumbled upon the quintessential "father and son" outing:  Roughly 98% of the people in that museum were father/son pairs; with the exception of one little girl who will probably grow up to be a fighter pilot, the only women I saw were the wives or mothers of the men and boys. 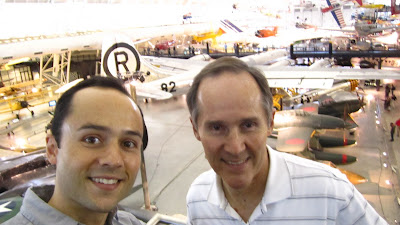 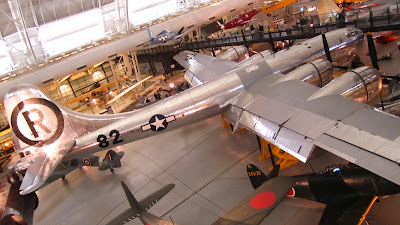 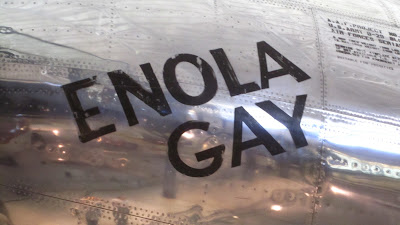 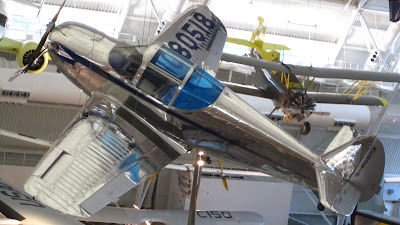 
Afternoon, Part II:  Great Falls on the Potomac River.  By the time the Potomac River reaches DC, it's a wide and placid river.  Just ten miles upstream, however, the river passes over some remarkable falls. 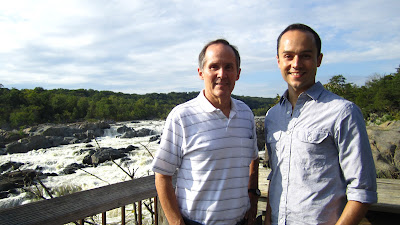 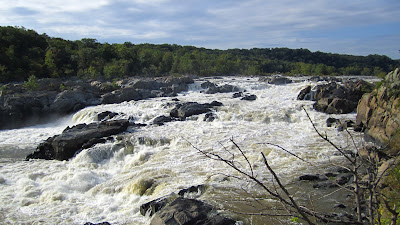 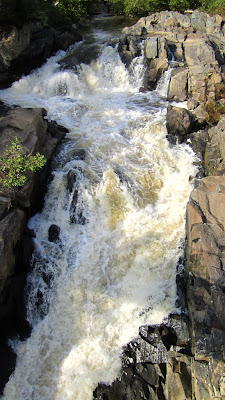 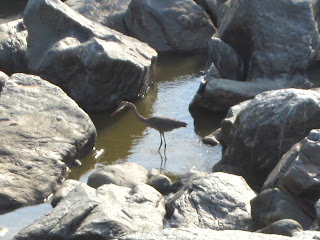 Strangely enough, in addition to the falls, the site is also a staging ground for Civil War "living history" enactments.  As far as we could tell, this involved a bunch of guys standing around in Union uniforms and facial hair, with the occasional march in formation up and down the trail.

Evening:  Dinner and Theatre Downtown DC.  We started with a brief tour of my law firm offices (including a visit to the rooftop terrace to take in the views), and then headed over to the W Hotel, where I had dinner reservations at the J&G Steakhouse.  I knew mon père would appreciate a good steak!  After dinner, we went to the Kennedy Center for the 9pm showing of Shear Madness. 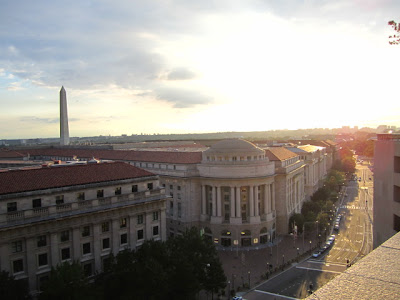 During intermission, we enjoyed observing and critiquing the outfits of our fellow theatre-goers.  Our favorite was a guy wearing a green-and-red plaid shirt with a rainbow striped sweater vest.  I tried to get a picture of the choice ensemble by pretending to take a picture of dad.
﻿﻿﻿

﻿﻿*  *  *
I thoroughly enjoyed this visit.  It meant a lot to me to have this time with my father.  And it was particularly special that we had the chance to visit with just the two of us.  You see, while this was the first time he'd visited me here, it was not the first time we'd been in DC together -- in a lot of ways, this visit was the mirror of the very first time I ever visited Washington, DC, over twelve years ago.  In the spring of 1999, he was here for meetings at Bolling Air Force Base, and I was a freshman at the University of Utah.  During spring break, I decided to fly out and visit him.  It was my first time on the East Coast, as well as the first time I'd ever traveled so far on my own.  I spent the days visiting museums (it was my first visit to the Smithsonian's original Air and Space Museum), and the evenings we spent together driving around the beltway to see the LDS temple, eating at a Scottish restaurant on King Street in Alexandria (I had quail with raspberry sauce), and other things that I can't remember right now.  I loved that trip and everything I did and saw.  It's entirely possible that I live and work in DC now because of the time I spent here with my dad during that week so long ago.
Posted by JJD at 12:08 AM

Looks like it was a great visit!Heard the falls were beautiful, the food was fabulous and the play was really fun!

Very cool! Just one question: Does Lady know a German restaurant was chosen over Mexican? For all the "wars" we had growing up......