A good friend of mine from law school, Amy, moved to DC after finishing a clerkship in Iowa, and we've been making a concerted effort to get out of the city more to explore the various hiking trails in the region.  We've both spent considerable time in the Rockies, and we both readily admit to a certain amount of Western snobbery with respect to the softly rolling hills that pass for "mountains" out here.  Even so, there's plenty of beautiful country and lots of lovely woods, and it's been fun to get out and see it.

Most of our hikes have been relatively short excursions through parks near to DC.  They've been enjoyable enough, but both of us wanted to do at least one "real" hike before the summer was out.  After some scheduling difficulties, we decided that today would have to be the day.  So this morning we headed out, bright and early, for a day of hiking in the Shenandoah National Park.

We planned to hike an approximately 14 mile circuit -- half of it going south, along the famous Appalachian Trail, and the other half going north, along the Bluff Trail, which doubled back on the other side of the ridge we'd come down on.  Having misunderstood our initial directions, we ended up taking an early detour that pulled us about a mile out of our way, so by the time we finished we'd done about 15.5 miles. 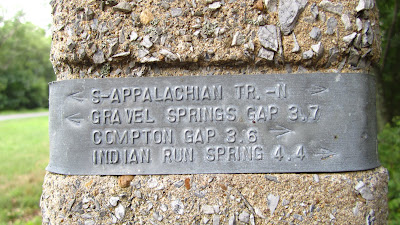 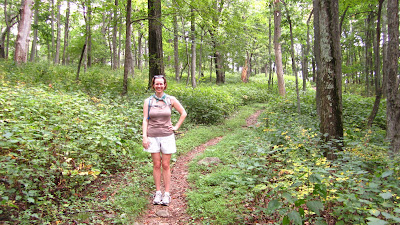 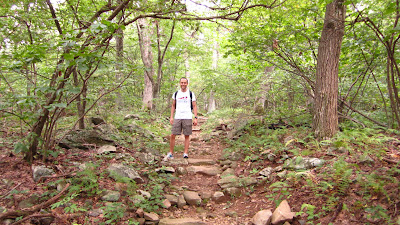 Along the way, we saw lots of trees.  To be honest, we saw too many trees.  The bulk of the trail ran along the tops of ridges and over the peak of a little mountain, but you'd never have known it, because the entire time we were enveloped in a lush forest that effectively blocked out any views we might have had.  Every once in a while, things would open up and we'd catch a hazy glimpse of the valleys below, but most of the time it was just tunnels of green.  As much fun as it would be, in concept, to hike the length of the Appalachian Trail, I think this lack of views would be a mighty monotonous hike.  Monotonous, though, is not the same as ugly.  Much of the forest we saw was very lovely, with light filtering through the lacy leaves and onto the carpet of ferns below. 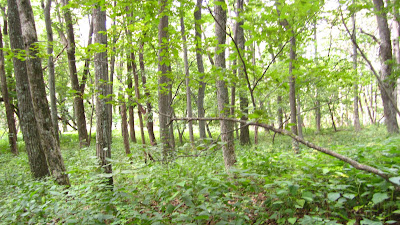 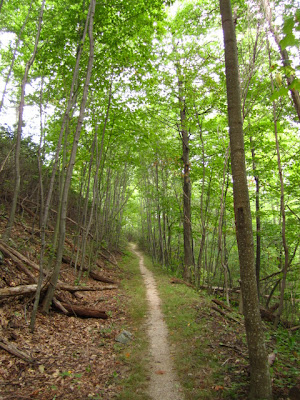 Without sweeping vistas to distract us, we were able to notice the smaller-scale beauty that surrounded us.  We discovered some startlingly orange fungus.  Also some butterflies eating dung.  And those invisible spider-webs that are so unpleasant to walk through?  Well, they look pretty cool when the sun catches them just right. 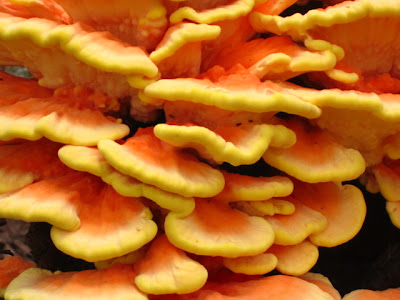 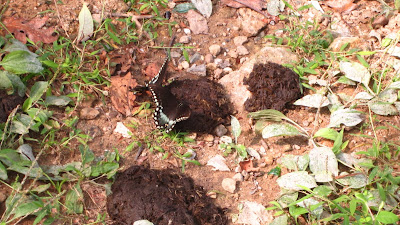 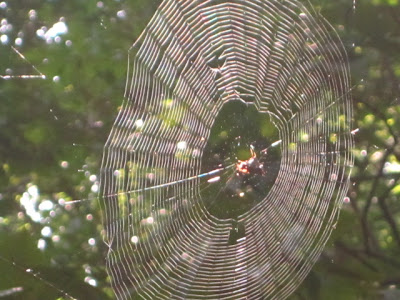 About halfway through the hike we came upon a hut meant for the long-term trekkers who spend the night on the trail -- and timing couldn't have been better.  The instant we got under the roof, the heavens opened with a classic summer cloudburst.  We ate our lunches while the rain poured down.  It lasted about 20 minutes and then blew over, leaving a dripping, steamy forest gleaming in the sun.

We ultimately did find some viewpoints.  Our favorite was one that had one of those interpretive signs to help you understand what you were looking at.  The sign purported to tell us about a certain mountain.  The gist of the message was the following:  (1) The mountain has a strange name and we don't really know what it means, and (2) something historical may or may not have happened there (we don't really know that, either), but (3) we had the budget for a sign, so here you go. 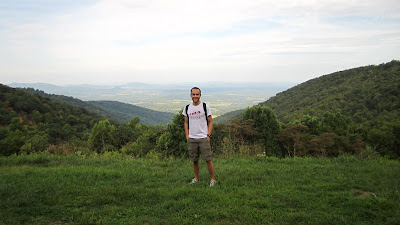 It was a great hike, and by the time we were done we were ready to be done.  It took us longer than we'd expected, though.  Based on past experiences, we had learned that when guide books call a hike "strenuous" and estimate that it should take "8 hours" to finish, it's usually code for "you'll walk easily across flat ground, and it will take you 3.5 hours."  So we planned accordingly.  Alas, although this hike was not "strenuous" and did not require "8 hours", it wasn't quite as quickly finished as we'd assumed, either.  Due to our early detour, and our halt during the rainstorm, we ended up finishing the hike in a little over 6 hours.  Which would normally have been fine, but today meant that Amy and I both missed our post-hike plans (I didn't make it to church, but I did manage to catch the end of stake choir practice, which should count for something!)


Oh, and we had to stop at Wal-Mart.  We don't have any Wal-Marts in DC, so it felt like we'd really traveled to the American heartland.  Nothing like being in a store that's almost as big as the great outdoors to help you appreciate being outside it. 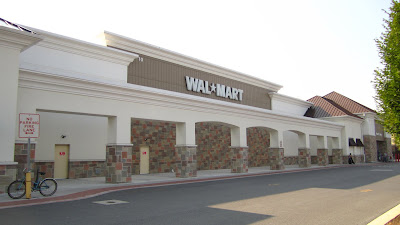