New Year's Day is typically pretty dull.  The parties from the night before are over, and although it's technically a holiday, it's one that you celebrate while knowing that you've still got a long, greyish stretch of winter before the distant summer.
That said, if you're willing to get up early(ish), New Year's Day is a great day to go places that might otherwise be intolerably crowded.  Such as the observation deck at the new Liberty Tower, built on the site of the old World Trade Center.
None of us had been there before, so we bought tickets for an 11am admission.  We emerged from the subway and were greeted by the imposing 1776-foot high tower.

We went inside and were directed downstairs to queue for admission to the One World Observatory. 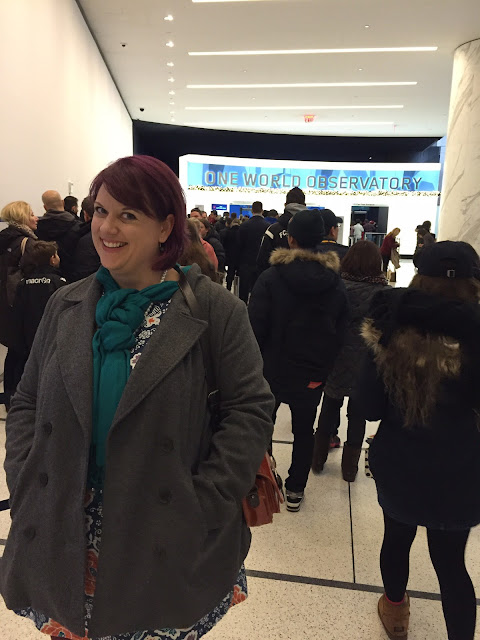 The lines weren't bad, but the vibe was strange.  The main entry hall felt very much like the lobby of a corporate office tower (which is accurate).  But then we were ushered into a winding corridor made to look like a fake tunnel of bedrock.  It was surely meant to educate us about how skyscrapers are built, and to symbolize the "bedrock" of the American spirit -- but mostly it just felt like a cheesy Disney ride.

Fortunately, when the elevators brought us to the top of the building, there was nothing cheesy or fake about the views.  They were stunning. 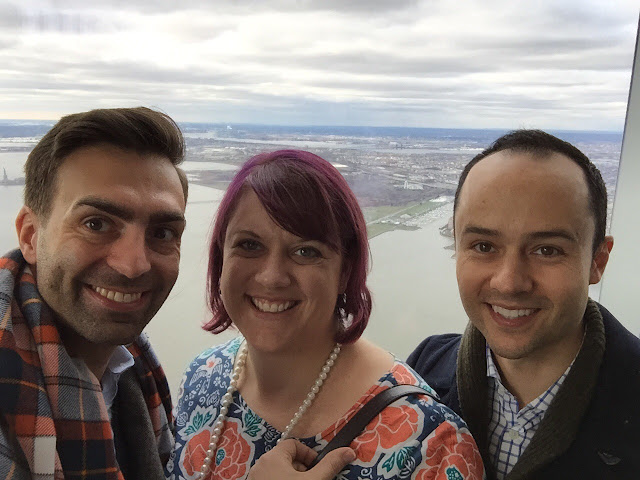 We also could see down into the World Trade Center Memorial, where the towers once stood. 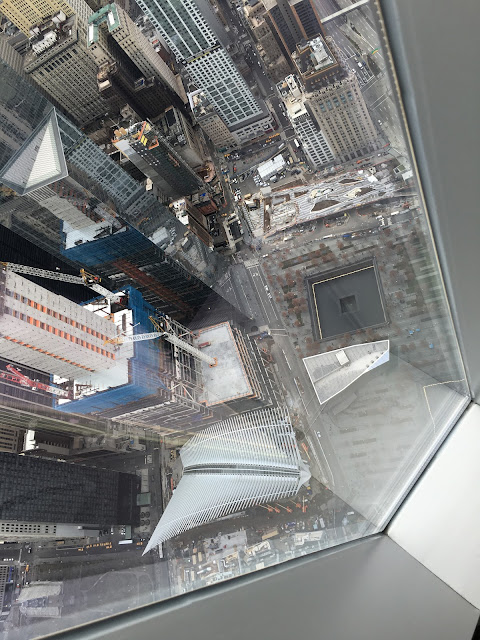 After we had made our way around the observation deck, we went down to have a closer look at the memorial.  It was somber and impressive.  And it was emotionally affecting for me in a way that no other memorial has been.  Its the first memorial I've visited that commemorates something major that I remember happening. 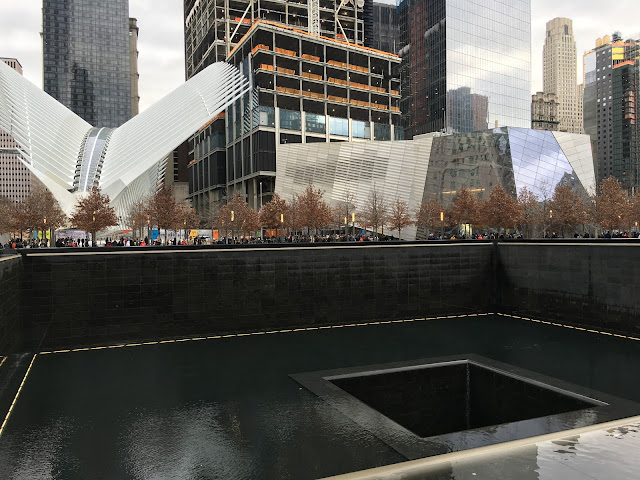 The transit station, designed by Italian architect Calatrava, is a lovely and surprisingly large structure that is kind of birdlike, but also surprisingly skeletal.  I liked it a lot. 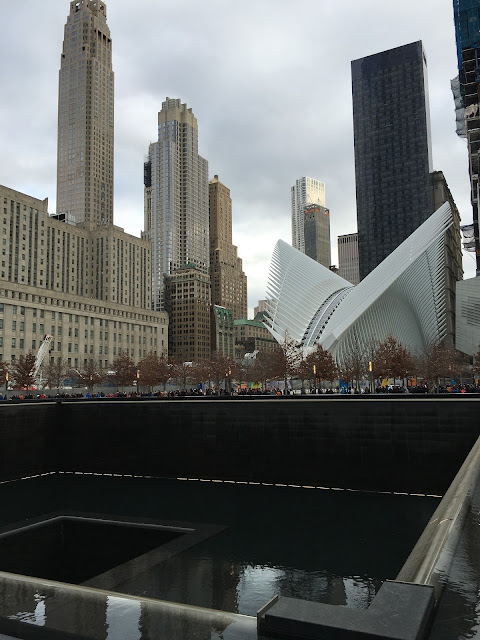 After paying our respects, we took the train up to Chelsea, where we met a friend of Justin's for lunch.  We then tried getting into the Met Museum, but discovered that it was closed on New Year's Day, and so had to settle with window shopping on Fifth Avenue -- which at this time of year is tremendous fun.

We started at Bergdorf Goodman, where we saw a sensible spelunking outfit covered in jewels . . . 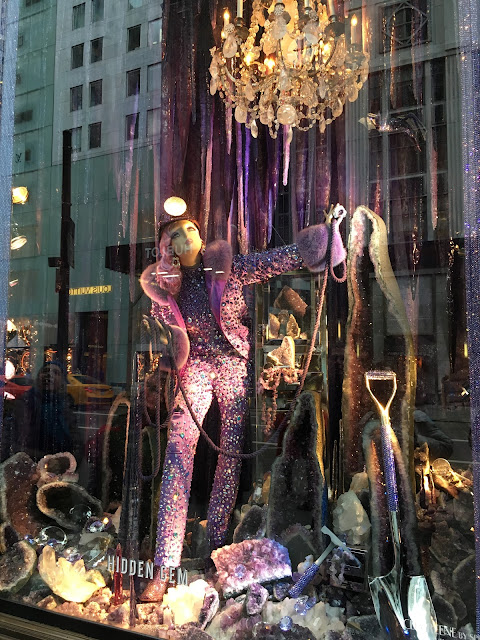 . . . it appeared to come with its own be-jeweled bat. 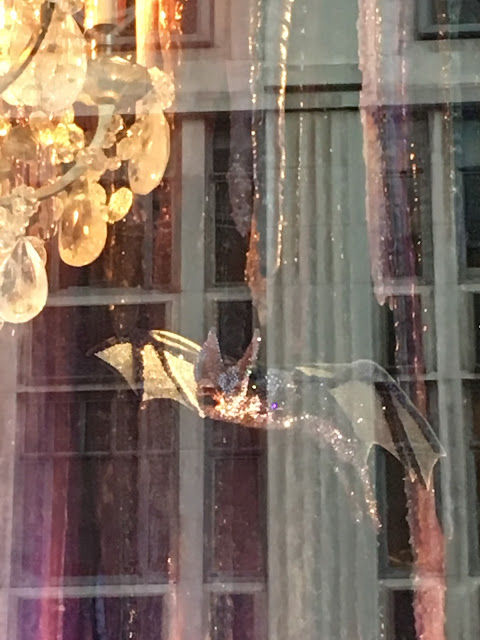 Inspired by the jewels, we walked to Tiffany and were charmed by their miniature doll-house displays. 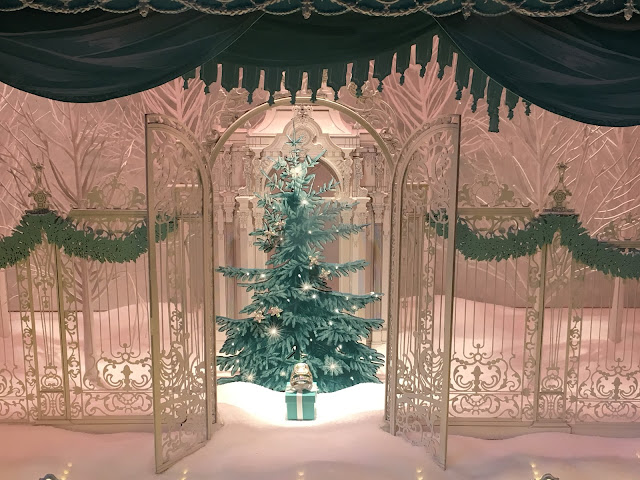 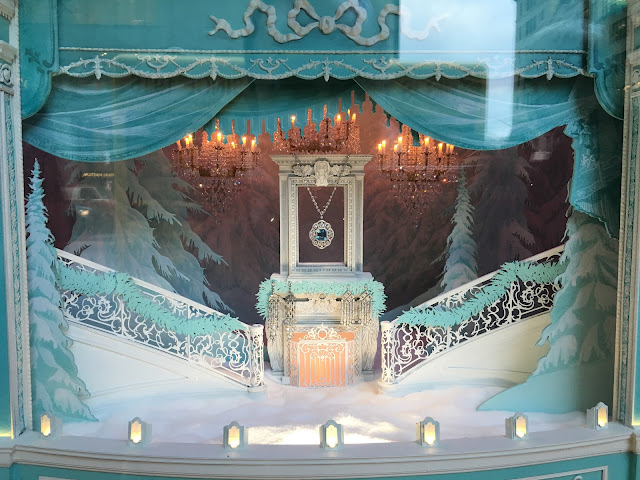 By this time Justin was getting cold and losing interest, but then we spied Saks Fifth Avenue and knew that we couldn't turn in quite just yet.

These windows started with some lovely winter gowns . . . 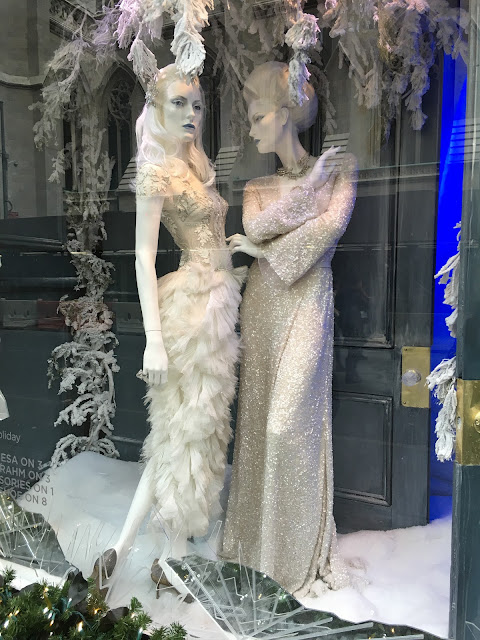 . . . that were worn by mannequins in progressively wild situations. 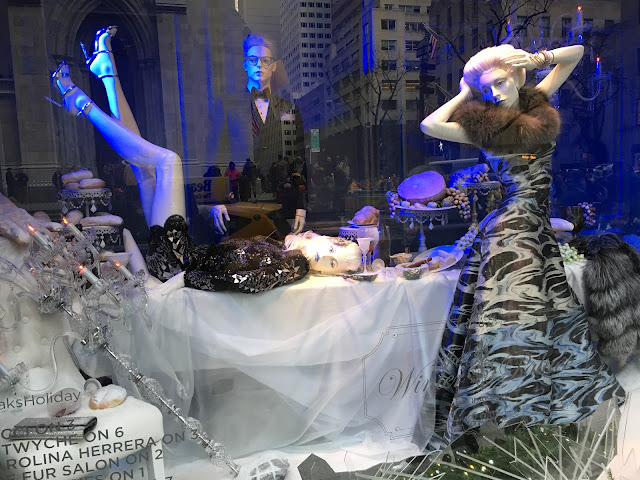 When we had taken in all of the fabulous windows, we went back to hotel for a snack and a nap.  Then we met up with a couple more of Justin's friends (Todd and Jon, who I had met on our trip to Mexico back in March) for dinner at a swanky Thai restaurant in Hell's Kitchen.

And of course, after dinner came the play of the day: 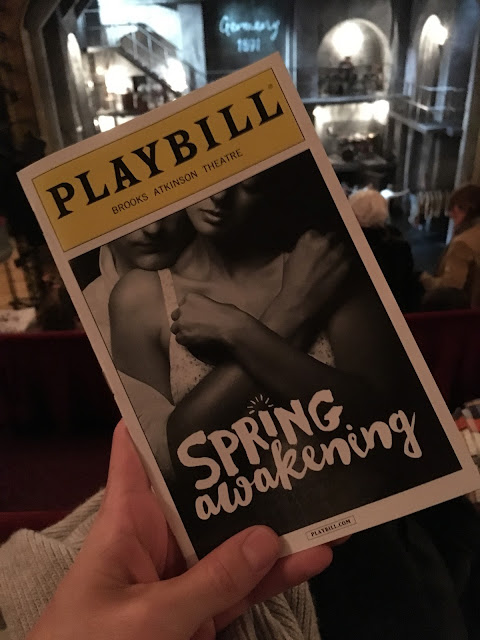 Spring Awakening is based on a late 19th Century German book that makes a very critical statement about the harm that repressive social mores and parenting styles can have on children.  I saw the original production of Spring Awakening on Broadway in 2007.  It got a lot of attention but was too much of a sensational, angsty rock-opera for my taste.  This version, however, had a softer, more acoustic feel, and the characters were less angsty and more innocent -- they were more convincing as innocent kids who were hurt by a repressive society and bumbling adults.
This version also was performed by deaf actors.  Not an obvious choice -- to have a deaf troupe perform a musical -- but a good one nonetheless.  The deaf actors signed throughout the musical, and most had hearing actors shadowing them to sing and speak the lines for those of us who couldn't read sign.  Some of the actors both signed and spoke.  The whole effect was beautiful, and I found that the expressive qualities of sign language enhanced the meaning of the spoken word and other body language.  I'd love to see more of that theatre group's work.