Being a twin is the best thing ever.  For me, it has meant having one of the smartest, funnest, most talented girls I know in my life since the very beginning.  I was about to say that she's one of my best friends, but that's not quite right -- the bond we have is better, deeper than that; it's the best of family and friendship all in one.  For the first eighteen or so years of our lives, we shared our birthday celebrations.  Then we left home, went to college, and have generally lived in different parts of the country ever since.  But this year I moved closer to Heather, and Heather's kids were old enough to be left behind for a weekend, so Heather flew out to Seattle for a few days and we got to celebrate together.  Fun, fun!

Heather arrived Thursday night.  I picked her up after work and we went to eat at Tamarind Tree, my favorite Vietnamese restaurant in Seattle.  Heather, who is not the most adventurous eater in the world -- especially when it comes to fish -- was very brave and tried a handful of dishes, despite the fact that they all used fish sauce!

I took the day off on Friday so that we could play.  We got up early and went out for a breakfast of tacos.  Because who doesn't want to eat tacos for breakfast?  Only along the way we got distracted at the neighboring rug store and ended up buying a rug instead.

Once the (very large) rug was loaded into my (very tiny) car, we returned to our original task of tacos for breakfast.  The weather was lovely, so we got them to go and ate them on my rooftop deck, using an overturned flower pot as a table. 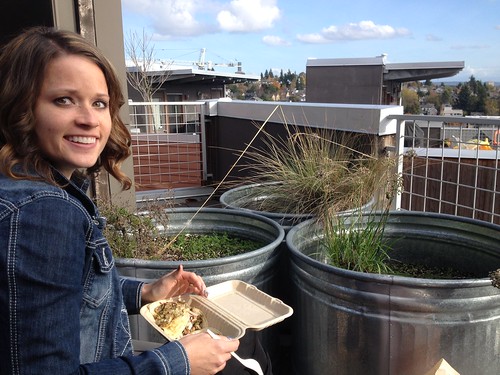 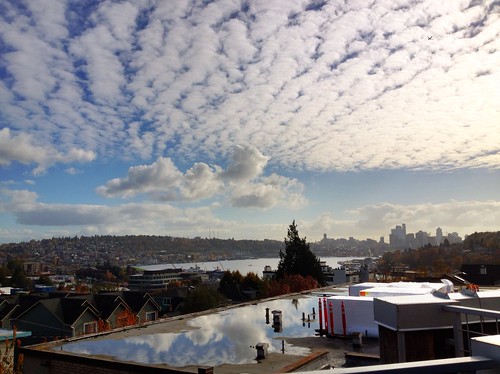 That afternoon, we headed downtown for a food tour of the Pike Place Market.  The rendezvous point was in a theater covered by the so-called "Gum Wall."  According to our guide, the Gum Wall originated when folks started sticking gum and coins to the wall while waiting to get into the theater.  Not surprisingly, opportunists stole the coins and the building owners tried to scrape away the gum, but it kept coming back.  Finally the owners gave up and the wall became a slightly disgusting tourist destination.

Next stop:  Doughnuts!  Because fried dough is always delicious, especially when it's covered with a light dusting of cinnamon and sugar and is still warm. 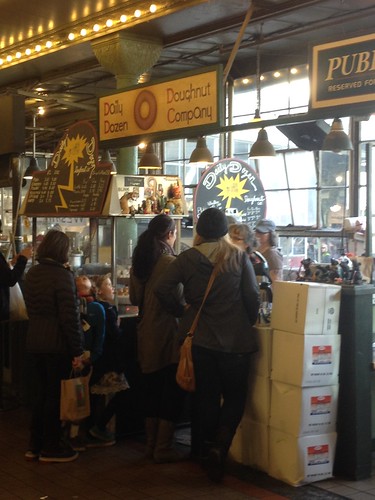 Then came the fishmongers.  We sampled a variety of cured salmon and watched them throw fish to each other, much to the delight of the shoppers. 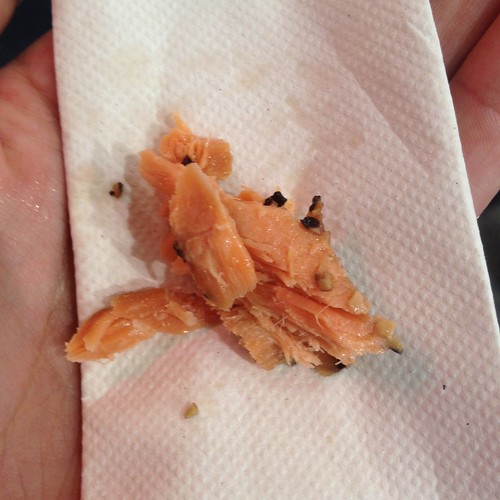 Moving from fish to other types of meat, we stopped at the butcher's shop to sample some tasty sausages and freeze for a minute in the walk-in meat locker that felt like it was waiting for a horror movie soundtrack.

Next stop was Beecher's Cheese, where we saw the giant vats and the delicious cheese that is made in them.  Their macaroni and cheese is out of this world. 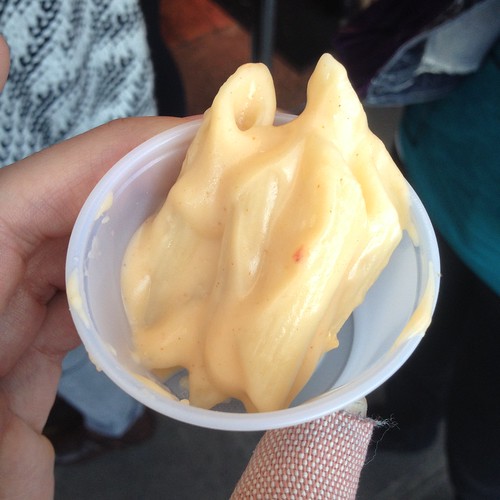 We stopped at a bunch of other places along the way -- a tea shop, a produce vendor with incredible fruit, a deli that serves gourmet sandwiches and sold retro sodas, a chowder house that claims to sell the best New England clam chowder in the country (and has a track record of winning chowder contests that would seem to back up that claim) -- and finally we ended up on a bench under a tree eating fresh crab cakes and looking out over the Puget Sound.

As soon as the food tour group broke, we headed over to Pioneer Square for another tour -- this time through a network of subterranean tunnels that is a vestige of Seattle's crazy history.  The gist?  Well, here goes:  The original settlers founded Seattle on the shores of the Puget Sound, in a location that was flooded twice a day by high tide.  Instead of moving the city, they just stayed and dealt with the mud and muck -- and by "muck" I mean sewage reflux caused by the rushing of tidal waters up the sewer pipes and out the toilets in people's homes.

Eventually there was a fire that burned the entire city to the ground, only instead of using that catastrophe as an opportunity to move the city to a more pleasant location, the city decided to stay where it was and raise the ground above sea level by filling in with rocks and dirt from nearby hills and sawdust from the mills (because everyone knows that sawdust is a super smart thing to build your city on).  The merchants weren't happy, though, because they didn't want to wait for the regrading project to be finished before they rebuilt their shops.  So they rebuilt at the original ground level while the city proceeded to raise the streets.  The result was a grid of downtown roads that were anywhere between 5 and 30 feet higher than the level of the sidewalks and shop entrances.  People literally had to climb up and down ladders to cross the street and to get into the stores.  A pain for the men (especially if they were drunk), and a real hassle for the women who still had to wear skirts.

Once the regrading of the streets was complete, the city covered over the lower sidewalks with new raised sidewalks -- thus the original street-level doors and windows of the buildings became basements, and the upper stories were now street-level.  At first folks thought that they'd just keep the now-covered sidewalks in use, but then they realized that they live in Seattle where the winter nights are super long and dark, and for some reason burning torches in enclosed subterranean tunnels with wooden buildings all around seemed like a terrible idea.  So after a short while of bumbling around in the dark, they closed the tunnels and thereby allowed all sorts of vermin (human and otherwise) to flourish beneath the city.

Eventually the city was tired of all the murders and prostitution and drug rings that were going on down there, so it condemned the tunnels and they became a dumping ground for debris over the years.  Finally, in the 1960s, some enterprising historian crawled back down and thought it would be a great idea to open up the tunnels for public tours -- which is where we are today.  The tour was super interesting and weird and made me realize just how crazy the process of building a city from scratch is. 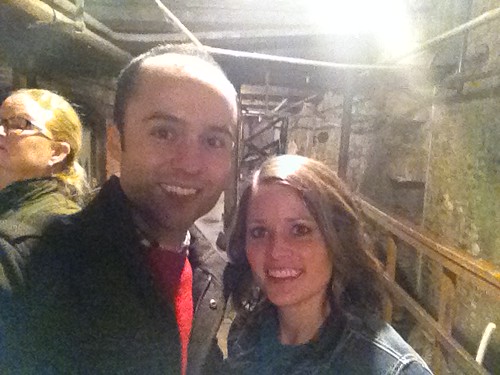 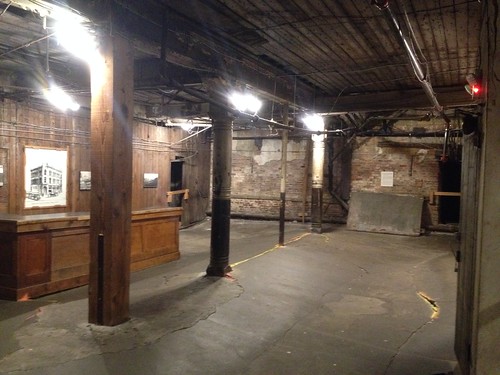 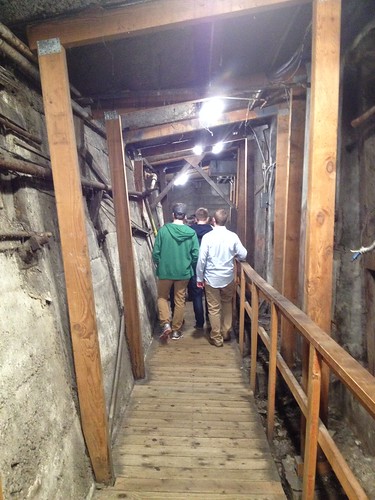 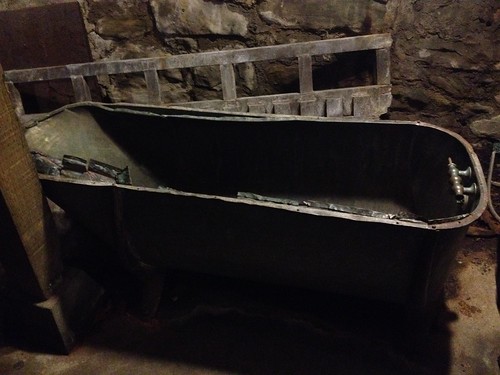 On Saturday we ended up doing house-related things.  I had originally planned to do more touristy things, but there were a number of projects that needed doing, and Heather said she was game to help out.

We tried out a few samples of paint color that I'd been meaning to try.  The painter had called to say that he was going to start earlier than expected, so finalizing the paint selection was top priority.

And we tested the rug in the living room.  It worked great, but we tried a couple other rugs, too, from a different shop in the neighborhood, just to make sure that I wasn't missing out on other potentially good options.  It was super helpful to have a second person to move the furniture around! 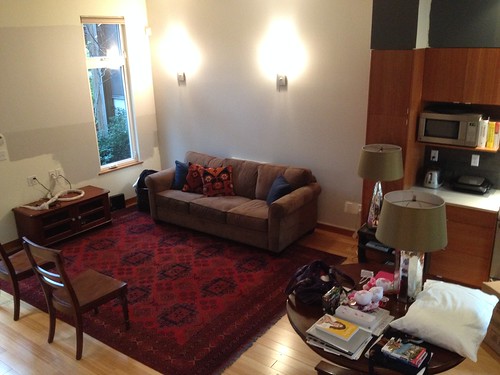 When we got hungry, we swung by Dick's Drive-In for an old-school hamburger experience. 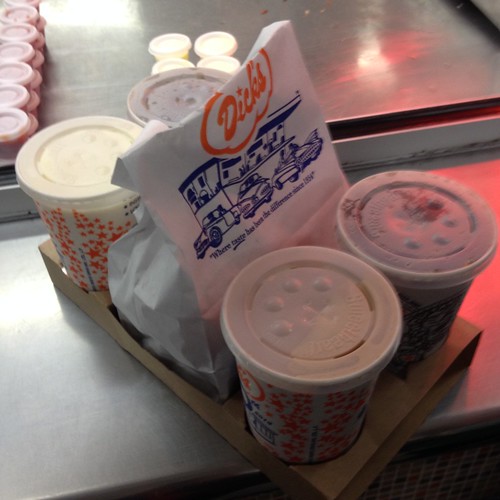 The rest of the day blurs together now, as I try to remember it -- I know we ran a lot of errands and saw a lot of furniture.  In another walk-by moment of serendipity, we passed a storefront downtown featuring a couch very similar to one I'd been eyeing at another store.  We went in to look at the couch, but Heather spotted a bed that was perfect for the guest bedroom.  So we picked out some upholstery and placed the order. 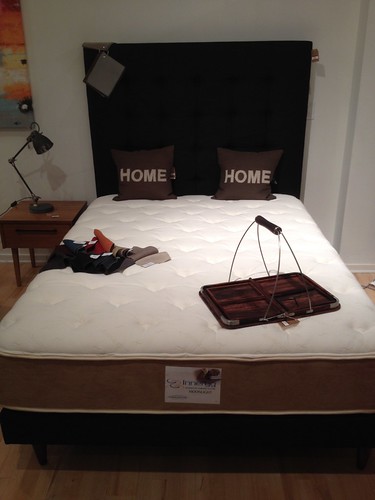 On Sunday morning we went to church and then stopped by one of the best viewpoints in Seattle on the way home. 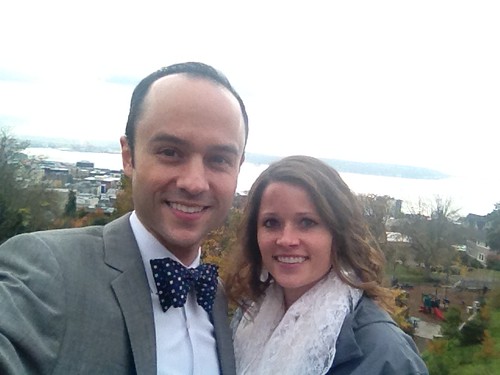 After taking in the views, we went home, changed into our rain gear and went down to the ferry docks to catch a ferry over to Bainbridge Island.  The weather was grim and wet, but we still had fun.   The ferry affords wonderful views of the city and neighboring islands, and Bainbridge is a lovely little community. 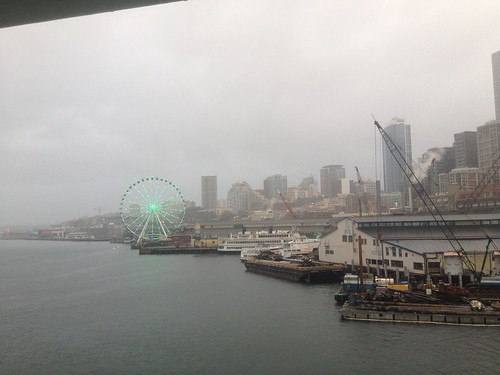 By the time we got to the island the light was already fading into the early winter evening.  We drove around and saw as much as we could before night fell, and then we found a spot for dinner while we waited for the ferry home.


That brought us to the end of our weekend together.  We got home and watched a few shows on tv and went to bed.  In the morning (the morning of our actual birthday), Heather flew home and I went back to work.  What a great birthday weekend!

So fun to see all this, especially now that we've been there! I saw Dick's Drive-In on one of our many drives through the neighborhood and had meant to ask you if it was a good place...