Birthdays aside, the main reason for Amanda's and my rendez-vous in New York was to see Then She Fell.  It's an immersive theatre experience roughly in the same genre as Sleep No More (which I saw and wrote about last year), only here the story was Alice In Wonderland, we didn't wear masks, and there were only fifteen of us.

That's right -- only fifteen participants each night!  Which makes it one of the harder tickets to get right now.  Amanda and I had looked at getting tickets during the original run, but the tickets sold out right away.  Back in August, when they announced that the run would be extended through the end of the year, I called Amanda and managed to snag two tickets; just happy coincidence that it was my birthday weekend, too.

So after exploring Brooklyn and taking a quick power nap on Saturday night, we headed out to Williamsburg (just north of where we were in Brooklyn) to find the old mental hospital where the show would be staged.  It was smaller than I'd expected -- a modest, non-descript building nestled between a church and an apartment complex.  The exterior was unmarked except for a very small poster on the door indicating that we were in the right place.

We went inside and were greeted by a nurse who verified our names and ID and directed us down the hall to the director's office.  There we met another nurse who pointed to the coat-hooks on the wall before handing us each a ring of keys (which we pocketed with eager anticipation) and a glass of wine (which we declined).  Then we set about exploring the room.  Opening filing cabinets; reading the files.  Some patients had been seen for anxiety.  Others for chills caught in the meadow.  One had been bitten by a jabberwock.

After a few minutes, the hospital director came in and had everyone take a seat around the perimeter of the room.  She welcomed us to the institution and explained the two rules:  (1) Don't speak unless spoken to, and (2) Never open any closed door.  Otherwise, the place was ours to explore.

Then more nurses came and started leading people away.  Some singly; some in groups of two or three.  Amanda was taken early on.  I stayed seated until finally I was left alone in the now eery room.  Finally a man who could only have been the Mad Hatter entered and told me to follow him.  Next thing I knew, I was in a tiny closet full of fabric and the Mad Hatter was throwing bolts of cloth and peppering me with questions -- Do I sew? Knit? Crochet? Macrame? -- hardly letting me answer before pulling me from the closet into a shop, where we found another participant waiting for us as if he were a customer.  I deposited my wares on the shop table and the Hatter asked if I took dictation, thrusting an ink well, an old dipping pen, and a sheet of paper my way.  Delighted, I said yes and took up my post at the desk.

From there I passed through a series of fantastical and bewildering moments -- I'd call them scenes, but in most of them I was a participant as much as a spectator, and so they were different from "normal" theatre.  I was with Alice when she stepped through the looking glass and sipped her first size-changing potion.  I helped the White Rabbit paint white roses red.  I met Lewis Carroll and again took dictation as he composed a mournful letter.  The White Queen fed me a grape; the Red Queen offered me tea.  I played a shell game with the hospital director, where the prize was a tiny key to a box containing a photograph of Alice and a poignant poem about aging with one's lover.  Alice and Lewis Carroll danced sideways together on the stairs, and met for a secret tryst in the confessional.  I joined the Hatter, Alice, Rabbit and the Queens for their mad tea party, eating truffles and trying to keep up when the Hatter yelled out that he wanted a new cup and so everyone should move down.  Sometimes I was alone; sometimes with others.  There was little downtime, but in those moments I found old photographs of the real people who produced the Alice stories; biographical sketches about their lives and what happened to them as they aged.  Also fragments of stories and poems from the books themselves, which, when paired with the historical information and the experiences I'd had, changed and colored the way I understood the story.

There was no linear narrative arc, but that didn't feel necessary.  I knew the narrative of the novels, and I knew the narrative of the real life events -- so the fragments presented to me in the hospital just fell into place within the larger tale.  It was as though nothing made sense, and everything made perfect sense, all at the same time.  The feeling was magical and detached -- the feeling of finally living inside a childhood book, only as an adult instead of a child when the dream of such a fantasy was strongest.

Finally I found myself alone in the Red Queen's cell, with nothing but a teacup and a poem, and I knew that the evening had ended.  Only it hadn't, really.  Because as Amanda and I walked from the hospital back toward home, we compared notes and discovered that we'd had almost completely different experiences!  Didn't you love the bath scene, she said.  And the mirror scene, I replied.  Only neither of us had experienced what the other had -- our paths had been different -- and so in addition to reliving the moments we'd shared, we also had the pleasure of telling each other tales of what we'd seen that night as we followed the White Rabbit or faced the Red Queen or sat with Alice alone amidst a pile of desks.

I felt a little like Alice must have felt when she reemerged from the rabbit hole and told everyone of her adventures.  Only Amanda had been down the rabbit hole, too.  So even though she hadn't seen Alice grow to fill a room and then shrink to be so tiny she didn't come up to my knee, she understood that it must have happened.  And then she told me of her own adventures, and it all started again. 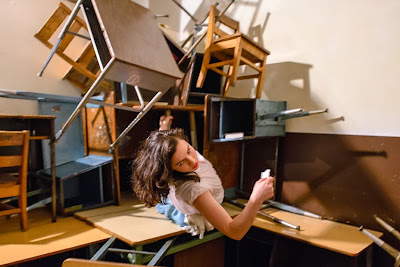 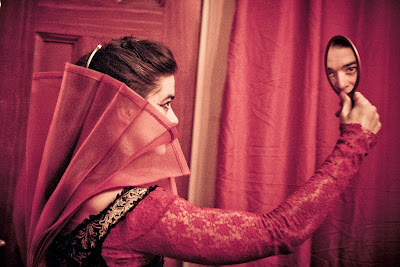