Call me crazy and extravagant, but sometimes you just have to set aside a weekend and go to New York to see an opera at the Metropolitan Opera.

Clear back in March, I bought tickets with some friends to see the new production of Eugene Onegin that the Met rolled out to kick off the 2013-14 season.  Composed by Tchaikovsky, conducted by Valery Gergiev (one of the world's leading conductors), and sung by Anna Netrebko and Piotr Beczala (who rank among the world's top sopranos and tenors, respectively; Netrebko, in particular is as glamorous as they come), this was bound to be a star-studded powerhouse of a performance.

On Friday after work, I hopped onto the train and rode up to New York.  I slept in on Saturday morning, enjoying a few hours' break from work and daily life, and got to the opera house early to see the temporary installation of sculptures on the plaza.  They were whimsical creations that made me think of cartoon aliens.  I liked how I could hear the older patrons clucking disapprovingly of the bright colors and crazy shapes.  As much as I applaud the stuffy old opera-goers for keeping opera afloat in America, they need to have their feathers ruffled every now and then... When they opened the house, I went in to soak up the ambiance and read the program notes.  This was my first time seeing Eugene Onegin, so I was curious to learn more about the production and the singers.

The opera is set in 1840s Russia and was composed in the 1870s.  It's based on a poem by Pushkin and tells the tale of Eugene Onegin, a bored young aristocrat, and Tatiana Larin, a bookish, romantic girl who lives on a neighboring estate in the countryside.  One day Onegin comes to the Larin estate with Lensky (another young man who likes Tatiana's sister) and, as luck would have it, Tatiana falls instantly in love with Onegin.  That night, after he leaves, she writes a letter to him telling him of her love.  The letter writing scene is one of the most famous moments in the opera.  Here's a video of Anna Netrebko singing that aria:

When Onegin receives the letter, he comes to Tatiana and gives her a moralistic lecture against the naivete of loving others and letting her love be known.  It's a condescending lecture and reveals a man too self-centered to be bothered with a young girl's feelings.  At the end of the lecture, though, he toyingly kisses her on the lips and then walks out of the room. 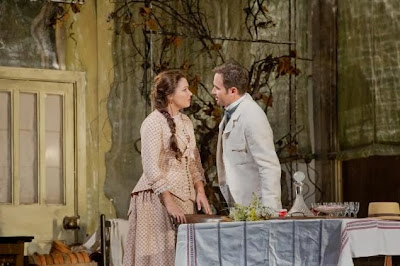 Later, Lenski brings Onegin to Tatiana's birthday party at the Larin estate.  Onegin gets bored and resents Lensky for having brought him, and so Onegin decides to provoke Lenski by flirting with Tatiana's sister Olga (whom Lenski loves). 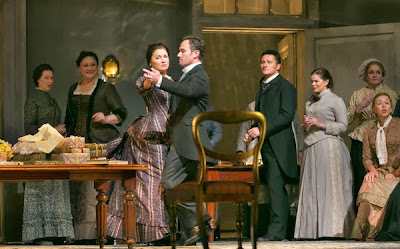 Lenski takes the bate and, in the mode of hotheaded young 19th-century men, challenges Onegin to a duel.  The next morning, as he awaits for Onegin to show up for the duel, Lenski sings a gorgeous aria mourning his young life (listen to the video below, but ignore the distracting slide show).  Then Onegin arrives and promptly shoots him dead.

Time passes and the curtain next rises on a high society ball in St. Petersburg.  Onegin arrives and we learn that he's spent the past few years roaming aimlessly, regretting the fact that he killed his friend and has no wife or other source of meaning in his life.  The party swirls around him and, lo and behold, who should walk in but Tatiana, now the wife of a high ranking prince. 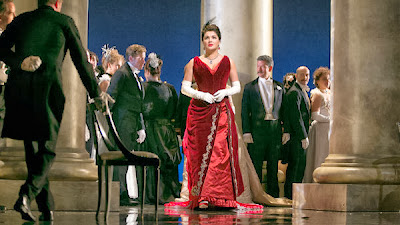 Naturally Onegin suddenly realizes that he is madly in love with Tatiana.  In a mirror of the first act, he writes a letter to Tatiana and meets her on the snowy porch of the palace.  He expresses undying love and asks her to run away with him. 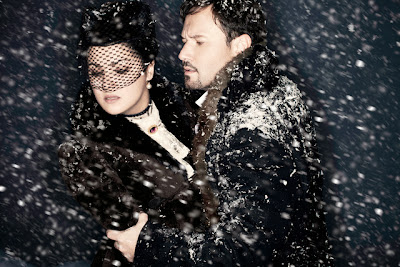 Tatiana reminds him of his patronizing lecture years ago and, though she admits to loving him still, refuses to go with him now.  She kisses him on the lips and then walks resolutely back to her life, leaving him distraught on the steps of the palace.

I loved it.  Tchaikovsky's melodies and orchestration are exquisite, and the Met's soloists, chorus and orchestra executed ever so well.  I loved seeing (and hearing!) these artists whose talents and skills place them among the very best in the world (I literally had goose bumps many times during the performance).

After the performance ended, we emerged back into the world of early autumn sunlight (which was odd -- normally I come to the Met later in the winter, so it's dark when I get out of the performances). I had arranged to meet with some friends for dinner after the performance.  He's a partner at my law firm, and she's one of the sound technicians at the Met responsible for the digital broadcasts that are telecast live to movie theatres across the country.  While I waited for them, I bought a Belgian waffle from the waffle cart in Lincoln Square (right between Lincoln Center and the Mormon temple) and found a little cafe table where I could read and people-watch. After about an hour, I met up with Mace and Louise at Boulud Sud, a Mediterranean restaurant run by celebrity chef Daniel Boulud. We had a wonderful dinner and even better conversation, and afterwards I went home for a quiet night at the hotel.  I had originally planned to go out with some friends from law school, but they ended up canceling last minute.  It was too bad to miss them, but, to be honest, I didn't mind curling up in bed and reading for a while before turning out the lights.
Posted by JJD at 6:56 PM

Good for her! Lady